“Consecrated oil is always a sign of God’s mercy. So the meaning of priestly anointing always includes the mission to bring God’s mercy to those we serve. In the lamp of our lives, the oil of mercy should never run dry.”
— Pope Benedict XVI 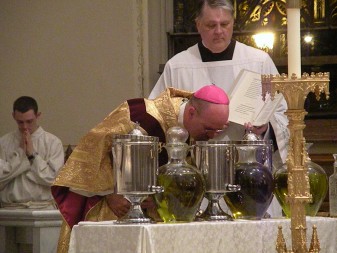 Bishop Kevin Rhoades breathes on the Sacred Chrism during the 2010 Chrism Mass.

SOUTH BEND — During Holy Week at the Cathedral of the Immaculate Conception in Fort Wayne, and at St. Matthew co-Cathedral in South Bend, Bishop Kevin C. Rhoades will celebrate the Chrism Mass and bless three oils to be used throughout the year at parishes within the diocese.

Father Jacob Runyon, parochial vicar of St. Matthew Cathedral, recently spoke to Today’s Catholic about the Oil of the Catechumens, the Oil of the Sick, and the Sacred Chrism, and the background and purpose of each of these oils blessed at the Chrism Mass.

Father Runyon explains that the Oil of the Catechumens is used before Baptism. “At a child’s Baptism there are two anointings, one before Baptism, and one after. The anointing before Baptism by a priest is an exorcism type of prayer asking God to free this person from any power of evil.”

Adults who are preparing for Baptism through the Rite of Christian Initiation, may receive the anointing of this oil by a priest several times prior to their Baptism. “Thus prepared, he is able to confess the faith of the Church, to which he will be ‘entrusted’ by Baptism.”
— Catechism of the Catholic Church, No. 1237.

The oil used during the sacrament of the Anointing of the Sick (formerly known as extreme unction), symbolizes strength. “Wrestlers in ancient Greece used to rub themselves down with oil because they believed the oil would infuse them with power. In using the Oil of the Sick, the same symbolism of strength that God gives those anointed through the grace of this sacrament is embodied,” says Father Runyon.

The Scriptural basis of this sacrament is described in the First Letter of James; “Is any one among you sick? Let him bring in the presbyters (priests) of the Church, and let them pray over him, anointing him with oil in the name of the Lord. And the prayer of faith will save the sick man, and the Lord will raise him up, and if he be in sins, they shall be forgiven him.” — Jas 5:14-15.

During this anointing, the priest says: “Through this holy anointing may the Lord in His love and mercy help you with the grace of the Holy Spirit. May the Lord who frees you from sin save you and raise you up.”

Father Runyon notes that this sacrament is only given once per illness unless the person’s condition becomes more serious and then it can be repeated. The Anointing of the Sick may also be given prior to surgery, or when a person is near death, he adds.
Olive oil is the ingredient in each of the three oils blessed by the bishop at the Chrism Mass. 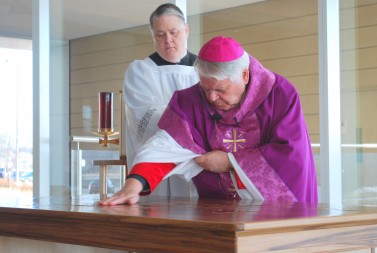 Bishop Emeritus John D’Arcy rubs Sacred Chrism on the altar in the chapel of St. Joseph Regional Medical Center in this 2009 photo.

“Sacred Chrism is a combination of olive oil mixed with a special perfume called balsam, which has a distinct smell. The word ‘Chrism’ comes from the root word for Christ which means ‘the anointed one of God,’” says Father Runyon.
He explains that the blessing of the Sacred Chrism by the bishop is different than the blessings of the other two oils. Just as Christ breathed on His disciples following His resurrection and said “Receive the Holy Spirit,” (Jn 20:22), the bishop breathes over the Sacred Chrism during the Chrism Mass, which is symbolic of the Holy Spirit coming down to consecrate the oil.

For most people, the anointing with Sacred Chrism happens twice in a person’s life. The first time it is used is at Baptism where a person is anointed with the Sacred Chrism, just like Christ was anointed Priest, Prophet and King,” says Father Runyon.

“The second time is at the sacrament of Confirmation when the bishop says, ‘Be sealed with the gift of the Holy Spirit,’ and anoints them on the forehead. This anointing confers the Holy Spirit upon a person. The gifts of the Holy Spirit give a person the strengthening one needs to live a life of discipleship,” he adds.

A third time that a person can be anointed with Sacred Chrism is the Rite of Ordination to the priesthood. “It happens after the priest is already ordained. The bishop has already done the imposition of hands and does a prayer of consecration. The priest gets up and puts on vestments, then he goes over to the bishop and his hands are anointed,” Father Runyon recalls.

“It’s a very powerful part of the ceremony because of the prayer that goes along with it. The bishop says as he anoints the hands: ‘The Father anointed our Lord Jesus Christ through the power of the Holy Spirit. May Jesus preserve you to sanctify the Christian people and to offer sacrifice to God.’”

After the bishop is finished anointing the new priest’s hands, the new priest is given a cloth to wipe the excess oil off of his hands. “There is a tradition where the cloth is then given to the priest’s mother. It is kind of a symbol saying ‘you gave me life’ and this is a symbol of my priesthood,” he adds.

During the ordination of a bishop, the bishop’s head is anointed with Sacred Chrism, which is symbolic of the whole person being consecrated. In addition, Sacred Chrism is used to dedicate churches and consecrate altars, Father Runyon concludes.
The Chrism Mass will be held at St. Matthew co-Cathedral on April 18 and at the Cathedral of the Immaculate Conception on April 19. Both Masses begin at 7:30 p.m.