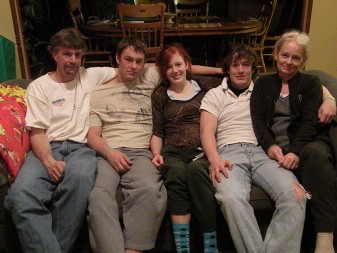 The Grusses, dad Greg, brother Greg, Shelby, brother Elliott and mom Patty encourage and support Shelby after a snow boarding accident injury. Shelby, a Bishop Luers senior and member of the Lady Knights basketball team, convincingly says she will walk again. Encouraged by her faith and the outpouring support of the community, the St. Aloysius, Yoder, parishioner notes, “I didn’t realize so many people cared, and they do. It shows you the world really isn’t as bad as everyone says it is.”

OSSIAN — Shelby Gruss, a senior at Bishop Luers High School, is known for her athletic prowess in basketball, track, cross country and softball. She loves the outdoors: Spending time with her horses and hiking, and even anticipates a career in wildlife research.

A snow boarding accident in early January, however, at Mad River Mountain in Ohio, has left this star-athlete with a brace in her back and a loss of sensation from her lower back down.

Shelby recalls the accident: “I took a jump and the (snow) board went out from underneath me. And from five or nine feet — somewhere around that — I fell straight on my back. I was in the air and thought, ‘This ain’t good.’”

Shelby was with two of her three brothers, Elliott and Greg, and another friend. “I think it was quite traumatic for them,” Shelby’s mom, Patty, says. Emergency personnel decided they would airlift Shelby to Miami Valley Hospital in Dayton.

In addition to a broken back, Shelby also fractured two ribs. “It hurt incredibly,” Shelby says, “but it’s a lot better now.”

Patty says, “The first thing she wanted when she saw me, besides telling me ‘Mom, this isn’t anybody’s fault,’ is ‘I want a priest. I’d like to talk to a priest.’”

On Monday, Patty and Dad Greg were still seeking a priest. Patty tried to call her pastor, Father Dom Carboneau at St. Aloysius, Yoder, to see if he knew any priests in Dayton. “I had gone to a quiet corner in the hospital to make this call,” Patty says, “and I was crying and hung up the phone, and there was a priest right there.”

Patty asked the priest, “Are you here for Shelby?” The priest said he didn’t know Shelby but met with her and the Gruss family several times that week.

“I believe that priest was an angel,” Patty says. “Every day that he came to visit Shelby he brought us stories … of miracles. He’d say, ‘Tell Shelby that she needs to pray for her miracle, have faith and pray.’”

Shelby spent one week in the hospital in Dayton and then moved to the Rehabilitation Hospital of Indiana in Indianapolis. She was there for three weeks and underwent intense physical, occupational and strengthening therapy — learning how to live everyday life with a wheelchair.

The Grusses hung all the cards and banners people sent to Shelby. Her roommate, Patty, would say, “Shelby, your room just cheers me up.”

Dad Greg adds, “It took some of the heartbreak out.”

She returned home, where she still undergoes therapy three times a week. In the meantime, four Knights of Columbus members from the St. Aloysius Council built a ramp in the Gruss’ garage to accommodate the wheelchair.
Just two weeks after coming home, Shelby returned to school at Bishop Luers.

A Luers’ couple set up a trust fund for Shelby and several high school basketball teams have made contributions as well as many individuals.

Bishop Luers rallied around Shelby hosting a very successful fundraiser at McDonald’s in Fort Wayne and began a bracelet campaign. Teachers and teammates worked at McDonald’s to assist the fundraiser.

And the team kept in contact with telephone calls and texts throughout the ordeal.

Shelby watched the Luers’ Lady Knights basketball team on the Internet when she could and attended games when she returned home.

Bishop Luers Principal Mary Keefer, who visited Shelby in Indianapolis delivering a care package of cards and banners from fellow students and teachers, tells Today’s Catholic: “Shelby Gruss was one of our front office workers at Bishop Luers. If she wasn’t running an errand for us, her nose was in her school work. Shelby did her homework with passion. She played her basketball with passion. I was with her in Indianapolis when she was working on her physical therapy. She did that task with passion. She is a wonderful young woman with a wonderful spirit.”

Keefer says, “Sometimes we have to dig deep to understand God’s plan. In this particular case, Shelby gives inspiration to me. She encourages me to do my best at all times and to always give 110 percent.”

Patty says of Bishop Luers, “They are more than just a school. They just really reached out to Shelby.”

And the outpouring from the community has been tremendous, notes Greg, “not only Bishop Luers, but I think almost every school in the city has sent Shelby something. When we were down in Indianapolis we had four schools that sent her something, (or teams) came (in for visits).”

“She has gotten so much from the community. It’s been overwhelming and really supportive. It’s kept her spirits up. There’s not a day that goes by that she doesn’t get something in the mail from somebody,” Patty adds.

The Norwell High School girls’ basketball team made up T-shirts asking people to pray for Shelby, and the Luers and Norwell teams wore the shirts the night they competed.

Shelby also heard from Zanesville United Methodist Church, where Shelby attended preschool which made up a prayer shawl. Along with the shawl came a note, “You may not remember us, but we remember you and we are praying for you,” Patty says.

Shelby has a lot of hope. “I believe that I’m going to walk again,” she says convincingly.

“She’s been absolutely tremendous, dealing with what she has been so far,” Greg says.

“I didn’t realize so many people cared. … It’s so surprising,” Shelby says. “It shows you the world really isn’t as bad as everyone says it is. It’s just a bad event has to bring us all together sometimes. But we really do have … good people.”