The following is a portion of a homily delivered by Bishop Rhoades at the annual Mass for the St. Vincent de Paul Society of South Bend on Nov. 27.

Today is the Feast of the Miraculous Medal. It’s not a feast on the universal calendar of the Church, but I believe it is a feast of Vincentians. Your founder, Blessed Frederic Ozanam, had a beautiful devotion to the Blessed Mother, a devotion that was especially influenced by the appearance of Mary to St. Catherine Laboure, whose feast day is tomorrow. Our Lady appeared to St. Catherine Laboure in the motherhouse chapel of the Daughters of Charity in Paris on this day, Nov. 27, in the year 1830, three years before Blessed Frederic founded the Society of St. Vincent de Paul.

What did St. Catherine Laboure see in that vision of Our Lady? She saw Mary standing on half a globe, holding a golden globe in her hands as an offering to heaven. On the globe in her hand was the word “France.” Our Lady explained that the globe represented the whole world, but especially France. Times were difficult in France then, particularly for the poor and unemployed, who were often refugees from war. France was first to experience many of the troubles that ultimately reached the rest of the world and remain even today. I don’t think it was a coincidence that Our Lady appeared in Paris, a city of miserable poverty and suffering, the city where in that same year, 1830, and in that very same month, November, Blessed Frederic moved to begin his studies at the Sorbonne, the University of Paris. 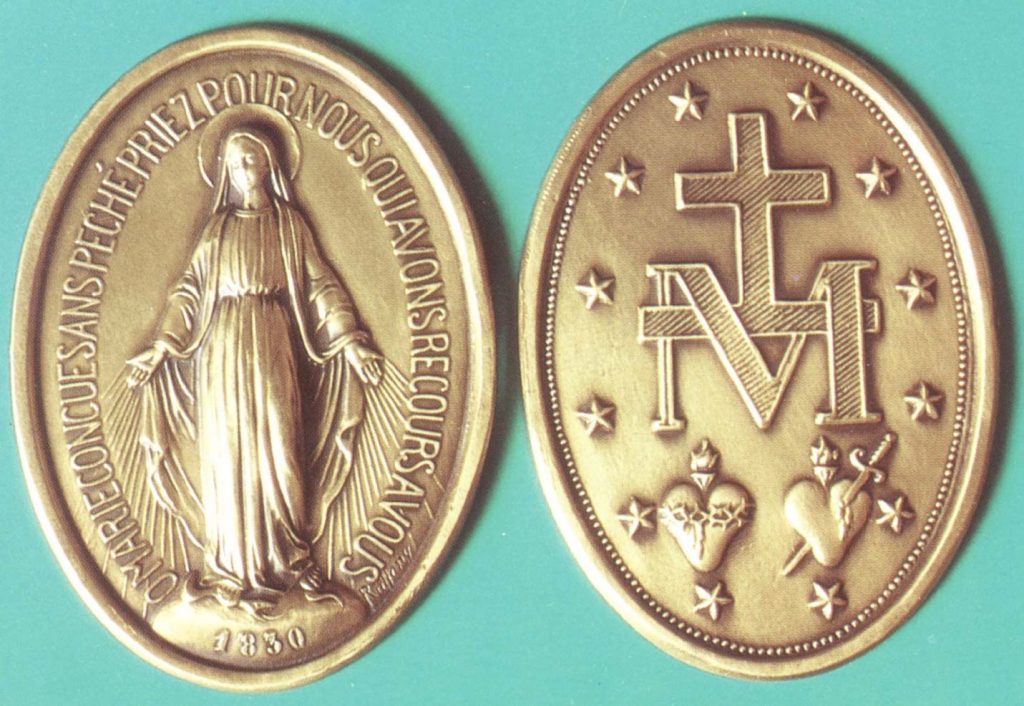 The vision that St. Catherine had of Mary then changed to show Our Lady with arms outstretched with dazzling rays of light streaming from her fingers. Our Lady told Catherine that the rays symbolize the graces she obtains for those who request them. Framing the figure was this inscription: “O Mary, conceived without sin, pray for us who have recourse to thee.” On the front side of the Miraculous Medal, Mary is standing on a globe, crushing the head of a serpent beneath her feet. Satan and all his followers are helpless before the Our Lady, the Queen of heaven and earth.

On the back side of the Miraculous Medal is a large M, standing for Mary. From the M a cross rises, symbolizing Christ and our redemption. The weaving of the M and the cross together shows Mary’s close involvement with Jesus and her part in our salvation. Twelve stars encircle the M and cross, recalling the vision of St. John in the book of Revelation of a woman clothed with the sun, who has on her head a crown of 12 stars. Below the M and cross are two hearts with flames arising from them: one encircled in thorns, representing the Sacred Heart of Jesus and His love for us, the other the Immaculate Heart of Mary pierced by a sword, representing the love of Mary for us.

The Blessed Virgin Mary asked St. Catherine Laboure to have this medal struck. She promised that those who wear it will receive great graces, especially if they wear it around the neck. The first medals were cast in 1832 and distributed. Among the first to wear the Miraculous Medal were the founding members of the St. Vincent de Paul Society. Blessed Frederic carried the Miraculous Medal with him during his whole life. The devotion to the Miraculous Medal spread like wildfire. Millions were distributed within a few years. When I think of the blessings that Mary promised to shower upon those who wore her medal, I think of the blessing of the St. Vincent de Paul Society, founded at that very time.

I also recommend wearing the Miraculous Medal as a reminder of Mary’s loving protection and as your model as Vincentians. Like Mary, we are called to give ourselves to God through service of our neighbor. St. Vincent de Paul offered Mary’s generosity and compassion in her visit to her cousin Elizabeth as our model of service to the poor.

St. Catherine Laboure was part of the Vincentian family. She was a Daughter of Charity in Paris, the religious community of sisters founded by St. Vincent de Paul and St. Louise de Marillac. It was a community devoted to the service of the poor. After St. Catherine Laboure received the apparitions and worked to carry out Mary’s instructions regarding the spreading of the Miraculous Medal, she spent the next 46 years of her life in a desolate suburb northeast of Paris in dedicated and compassionate care of the elderly sick and poor. People didn’t know she was the one who had received the vision of the Miraculous Medal until soon before her death. Because of her humility, she is often called the “Saint of Silence.” Humility is one of the virtues of Vincentian spirituality. You are called to serve the Lord with humility, like Mary, not seeking praise and attention for your good works. The humble St. Catherine Laboure is a good model for us.

I end this homily with the little prayer inscribed on the front side of the Miraculous Medal, a prayer that we can say often, asking for Our Lady’s intercession for ourselves and for the society: “O Mary, conceived without sin, pray for us who have recourse to thee.”