SAO PAULO (CNS) — A Brazilian nun who has moved into the finals of a TV cooking show said she received “divine help” and prayed the entire time she was cooking.

The “divine help,” she said, helped her notice that the shrimp she was supposed to cook were not deveined.

“If I had left them the way they gave them to me I would not have won,” said Sister Lorayne Caroline Tinti, a member of the Sisters of Our Lady of Resurrection. She prepared shrimp stroganoff and tiramisu for the episode of MasterChef Brasil. Sister Lorayne is now scheduled to compete in the show’s 2020 final contest at the end of December.

“Many people mentioned how calm I was throughout the episode, and I tell them it was because I was praying for Our Lord to help me get through it. That gave me confidence,” Sister Lorayne told Catholic New Service.

Sister Lorayne said she learned to cook early, with members of her family.

“My mother, aunt and grandmother always cooked so I learned from them. My father also was interested in the preparation of food,” she told CNS.

Her culinary skills, she noted, improved while living in the order’s mission house in the state of Minas Gerais.

“We had a bakery there which the sisters ran, so I learned about making pastries and bread,” she added.

While looking at her social media, Sister Lorayne came across a call for participants for MasterChef Brasil and decided to register.

“I needed authorization and, at first, the mother superior was not very keen on me leaving the convent to go on TV, but the sisters here convinced her,” she said with a chuckle.

Asked what motivated her to sign up for the contest, Sister Lorayne said the show gave her a chance to talk about the social projects that the sisters do with the elderly and children, and to encourage young people into looking to religious life as an option.

“After the show we had many lay persons call up asking how they could help our projects, and a few young people wanting to know more about religious life in general,” she said.

But it was not only laypeople who reached out to Sister Lorayne after the cooking challenge: “I received calls congratulating me for my participation from many religious, including two bishops.” 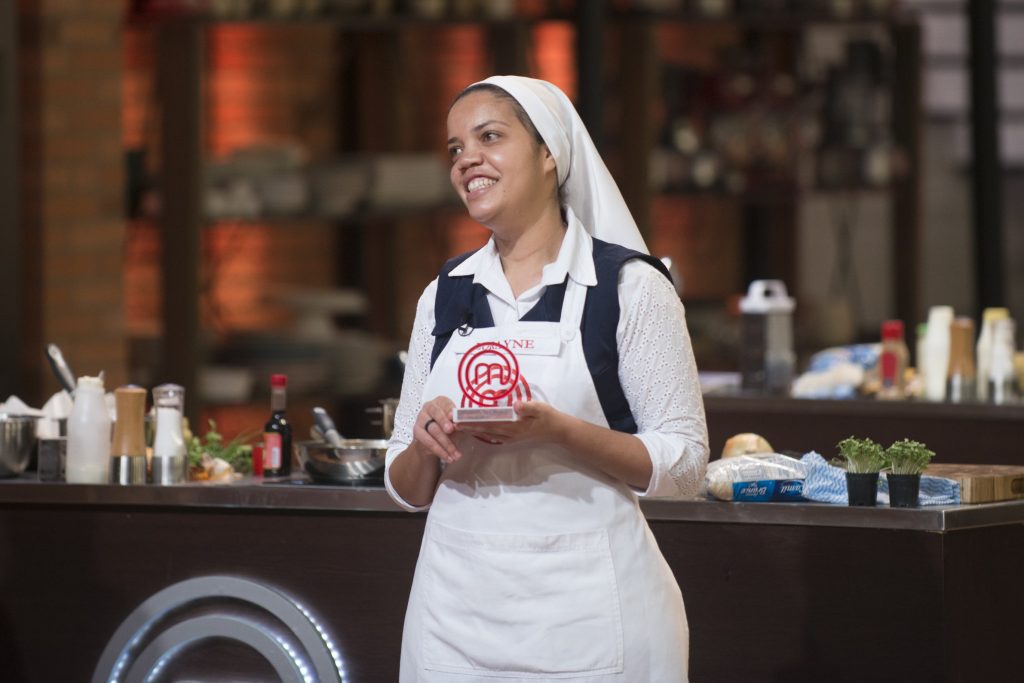 Sister Lorayne Caroline Tinti smiles while holding the trophy for her victory in the 17th episode of MasterChef Brasil Aug. 7, 2020. Sister Tinti, a member of the Sisters of Our Lady of Resurrection, is now scheduled to compete in the show’s 2020 final contest at the end of December. (CNS photo/Carlos Reinis, courtesy BandTV)

Asked about her favorite food to prepare, Sister Lorayne was quick to say eggplant.

Those who eat her meals, however, say she excels in pastries and deserts.

“Whenever there is a celebration, it is always ‘let Sister Lorayne bake the cake,’” she said as she laughed.

Sister Lorayne said she does not know what the organizers will ask her to cook for the finals, but she is certain of two things: She will once again ask for divine help and will pray while cooking.