Traditionally performed on the first Sunday in Lent, Bishop Kevin C. Rhoades celebrated the Rite of Election and Call to Continuing Conversion at St. Matthew Cathedral in South Bend March 1. From parishes located in the western half of the Diocese of Fort Wayne-South Bend, 131 catechumens and 97 candidates are preparing to enter into full communion with the Catholic Church.

At the service, Bishop Rhoades emphasized the love of God the Father for His children, which the catechumens and candidates seek to become in a deeper way. He quoted the second reading, from the Letter to the Ephesians, saying, “St. Paul writes: ‘in love, the Father destined us for adoption to Himself through Jesus Christ, in accord with the favor of His will, for the praise of the glory of His grace that He granted us in the beloved.’”

The Gospel reading for the day focused on the well-known Bible passage John 3:16, which clearly and concisely explains the depth of God’s love for us. This love also is illustrated by Jesus’ sacrifice for humanity by dying to redeem His people.

Regarding the love of God, Bishop Rhoades said, “Before the foundation of the world, before creation, this was God’s loving intent: that we have eternal life with Him. That’s why he gave His only Son, who assumed our human nature and suffered, died and rose from the dead. He has thus redeemed us so that we can share through Him in the life of the Most Holy Trinity.” 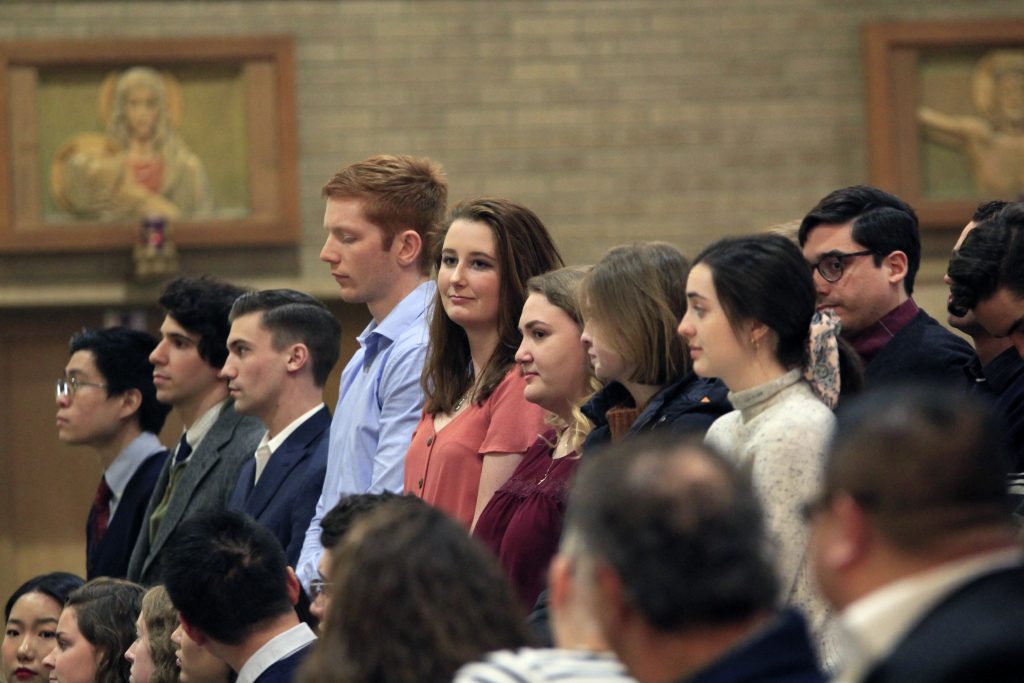 Photos by Jennifer Barton
Catechumens and candidates declared their intentions to enter into full communion with the Catholic Church during the Rite of Election and Call to Continuing Conversion March 1 at St. Matthew Cathedral, South Bend. At top, young people from the Basilica of the Sacred Heart, Notre Dame, stand as their names are called.

While there continues to be much discussion within the Church about the number of Catholic young people today who choose to reject their faith, Sunday’s rite was striking for the many young men and women demonstrating a desire for fuller membership in the Church. The combined total of catechumens and candidates from the University of Notre Dame and Holy Cross College was more than 20 students. Other colleges, including Goshen College, also had candidates presented to Bishop Rhoades. Aside from the colleges, there also were many grade school and high school youths presented at the Rite of Election and the Call to Continuing Conversion. 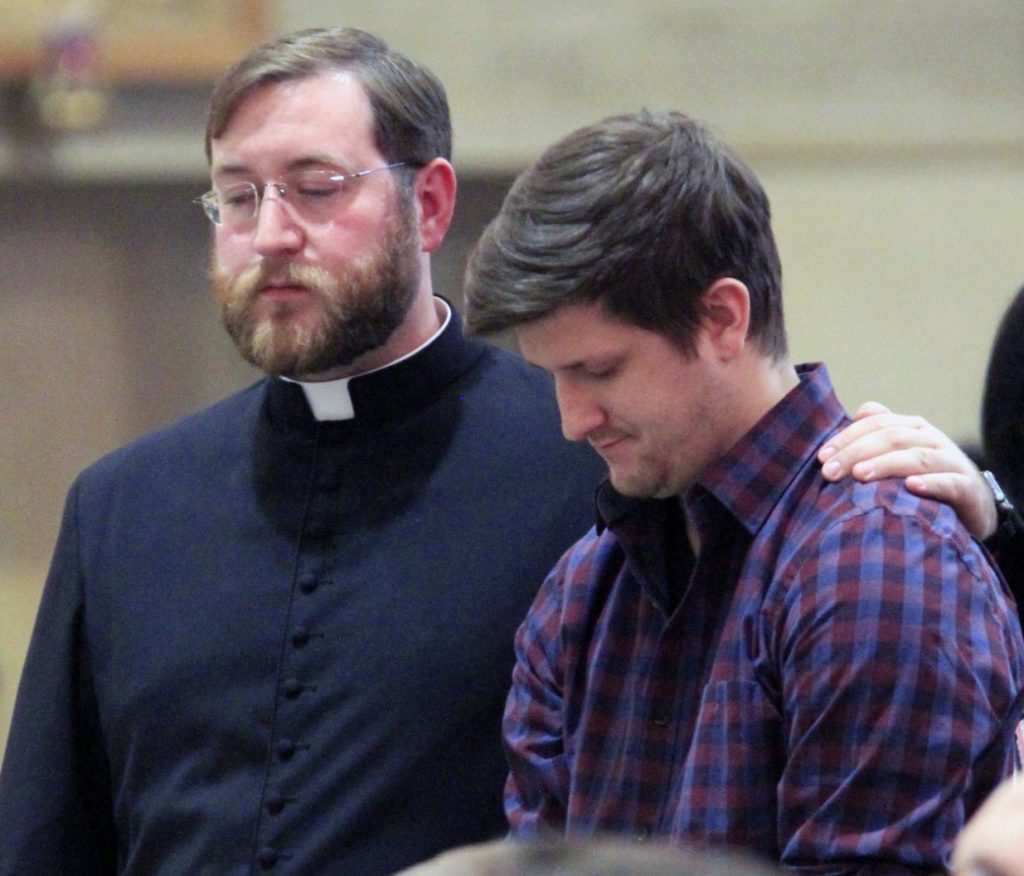 Alice He, a Notre Dame student, is now one of the elect. A native of China and raised near Hong Kong, He shared her story of conversion.

“I received a Bible from a missionary when I was 10 years old and I started reading it on my own,” she said. As she grew older, she began attending a Catholic church near her home.

“I came for college at Notre Dame: I wanted to go to a Catholic university,” she said. That was where, in November, she began the process of formation for acceptance into the Catholic Church. “I am really excited, knowing (Easter Vigil) is also the end of Lent.”

Another participant from South Bend was Joshua Crudup, a candidate from St. Therese, Little Flower Parish. “What led me to the Catholic Church is that I heard the call. I went to Saint Joseph High School and really learned more about Catholicism and the root of where Christianity started.” Crudup’s parents attend a non-denominational church, although he said his father is happy for him and the decision he is making to become Catholic. Crudup expressed appreciation that the RCIA director at his parish matched him with the perfect sponsor to guide him on the path.

In hindsight, Crudup said he can see how everything came full circle for him.

“I live two minutes away from St. Therese, and I always wondered about that church. I was only in it once before, when I was 6 years old, and a priest approached me and said, ‘I can see you becoming Catholic.’ God works in mysterious ways. He gives you hints, but you have to go back and connect the dots.”

Catechumens, those who have not received Christian baptism, prepare for their baptism into the Body of Christ on Easter Vigil. Through the sacraments, particularly that of baptism, the love of God pours over them. Bishop Rhoades affirmed this gift of God’s love and the new relationship with Him that the catechumens will begin at Easter. 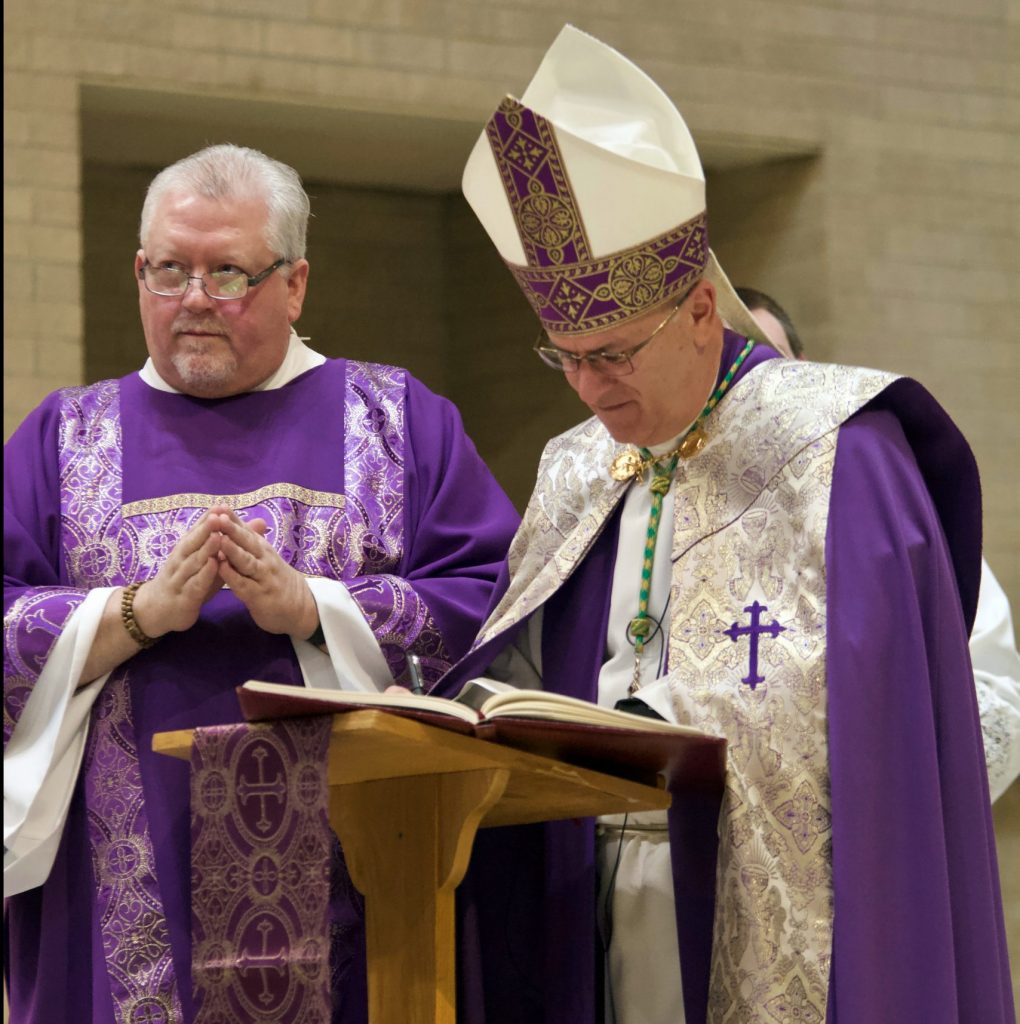 Bishop Kevin C. Rhoades signs the Book of the Elect with the names of a parish’s catechumens, assisted by Deacon Frederick Everett. See article and more photos on the back page of this week’s issue of Today’s Catholic.

“You will enter into this filial relationship with God. You will become adopted sons and daughters of God, partakers of the divine nature, new creatures. You will become brothers and sisters of Christ and temples of the Holy Spirit.”

Those who already have been baptized and now seek a deeper relationship with God through confirmation and first Communion are known as candidates. The bishop addressed the candidates saying, “Like our catechumens, you will receive the gifts of the Holy Spirit in the sacrament of Confirmation. And you will receive the true and holy Body and Blood of Christ in the Eucharist. You will be drawn more deeply into God’s Trinitarian life, into His communion of love.”

In closing his homily, Bishop Rhoades spoke powerfully to the catechumens and candidates about the new journey on which they would soon embark. “This is the answer, the fulfillment, to our deepest longings as human beings: the joy and peace of eternal life with God, who is love.” 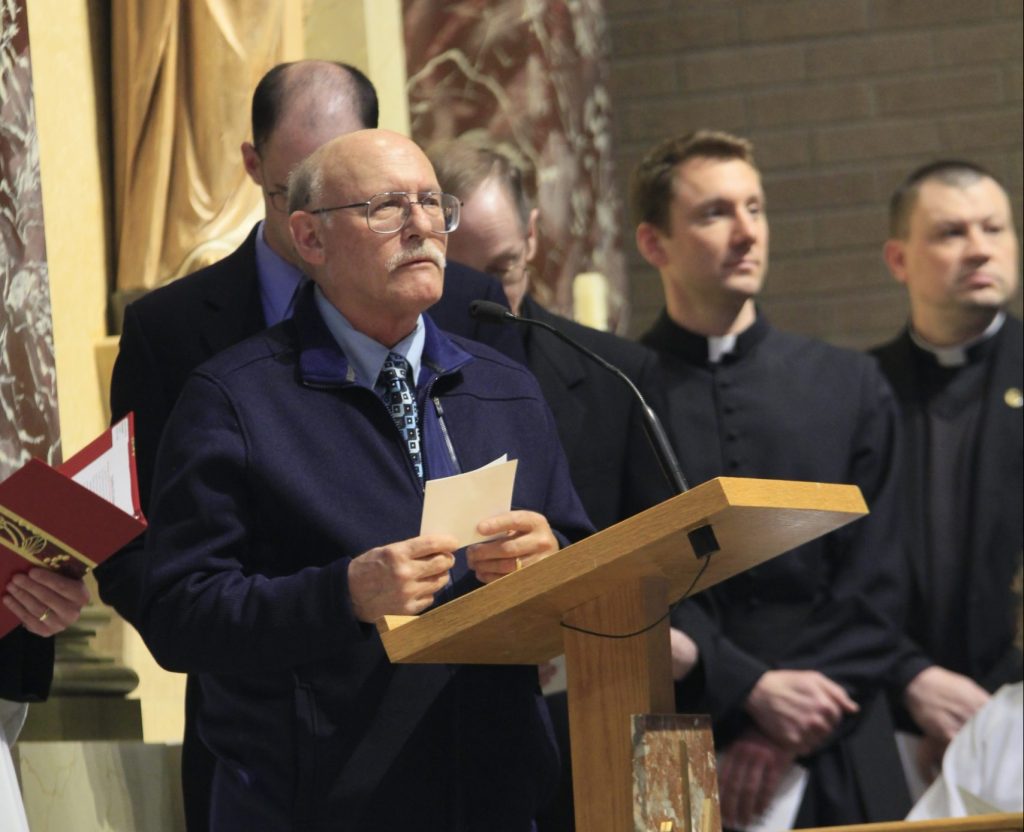 A representative of St. Mary of the Annunciation Parish in Bristol reads the names of the parish’s catechumens so Bishop Rhoades can enter their names in the Book of the Elect.