It took four years to craft and almost four months to install and tune, so expectations were high. Still, the brand-new Murdy Family Organ in Notre Dame’s Sacred Heart Basilica is surprising worshippers and musicians alike with its versatility and the beautiful sounds it makes. With 70 stops and over 5000 pipes, this is “an organ for the ages” that “will outlive us all,” according to master builder Bruce Shull.

The new organ was dedicated on Jan. 20, the feast of Blessed Basil Moreau, founder of the Congregation of Holy Cross. It is the fifth pipe organ to accompany worship at Sacred Heart since the 1850s, each one bigger and better. Paul Fritts and Company Organ Builders of Tacoma, Wash., were charged with creating an organ of “rare beauty, coherence and depth.” Choir director Karen Kirner calls the result “fantastic” and “stunning.” 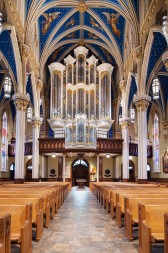 Gail Walton, long-time organist and liturgical choir director at the basilica, died in 2010. She is credited with the vision for a new organ. The Holtkamp Organ, installed in 1978, had become increasingly inadequate. Andrew McShane, director of music, explained that the organ at Sacred Heart gets much more use than a parish organ, which may be played once a day or even once a week. Long the only recital-quality organ on campus, it was used for concerts as well as liturgies, besides all the necessary practice time. Eventually, McShane said, the sound of the organ could barely reach the sanctuary, let alone the Lady Chapel behind the main altar. “The basilica has simply outgrown the Holtkamp organ and there was a need for a larger, better functioning organ to occupy the space and sustain the basilica for years to come.”

The new organ was made possible by a generous gift from Diana and Wayne Murdy of Colorado, whose children and grandchildren attended Notre Dame. The Murdys, who also endowed an engineering chair, claim no musical expertise. But they are good friends of basilica rector Father Peter Rocca, CSC, and they love the sound of the new organ.

In eighth grade, Fritts wanted to write a paper about becoming an organ builder. His workshop makes its own pipes, adopting European techniques like casting the metal on a smooth layer of silica sand and peanut oil several inches thick, rather than on cloth. The shop has crafted two previous pipe organs for the University, one in Reyes Organ and Choral Hall at DeBartolo Performing Arts Center and the other in the Gail Walton choir rehearsal room in the campus ministry building.

Preparation had to take place at Notre Dame as well as in Tacoma. Because the new organ is 9-1/2 tons heavier than the old one, steel-ribbed piers and concrete were used to reinforce the 145-year-old building. Changes were also made to the flooring in the basilica to improve the acoustics, and climate control was another important consideration.

The Holtkamp Organ’s unique three-keyboard console, whose keys all have a natural-wood finish, will be on display in the basilica museum. Sadly, there is no market for its case and internal works, but its 2,929 pipes have been donated for the new church at St. Pius X in Granger. There, organ builder Aaron Bogue is combining them with parts from the parish’s own old organ. He estimates that the Holtkamp pipes are worth $300,000 to $400,000.

After the organ was delivered on July 31, the Fritts team spent months assembling it piece by piece, tuning each pipe and voicing the organ to sound right in this unique space. They had to work off hours, putting their tools away when the basilica was being used for weddings and liturgies.

Now that the work has been completed, students in Notre Dame’s increasingly competitive undergraduate and graduate organ programs “will be able to explore and perform the breadth and depth of the organ literature of the last 400 years,” according to organist Craig Cramer. The two larger Fritts organs on campus “will be the best teachers these students ever have.”