This year marks 175 years since the founding of the University of Notre Dame.

The main event of the anniversary celebration will occur at the start of the semester in August. Called the Notre Dame Trail, the public is invited on a walking pilgrimage remembering the 320-mile journey from Vincennes to South Bend made by Father Edward Sorin and the Brothers of St. Joseph in 1842, which precipitated the founding of the university. The ND Trail will follow much of the original route, albeit shorter, only 67 miles, under covered bridges, verdant forests and abundant fields. There is still time for those interested in participating to plan and train for the once-in-a-lifetime event. 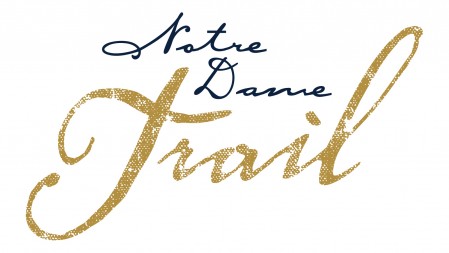 Sainte-Croix, or Holy Cross, is a congregation with two societies; that of priests and that of brothers. Also part of the Holy Cross family is three communities of women religious.

On the feast of Our Lady of the Snows, Blessed Basil Moreau, superior of the young congregation, sent Father Sorin and six Brothers of St. Joseph from the Motherhouse in Le Mans, France, by ship to the New World. The six brothers were Brother Vincent Pieau, 44 years old; Brother Joachim Andre, 32; Brother Francis Xavier Patois, 21; Brother Lawrence Menage, 26; Brother Amselm Caillot, 16; and Brother Gatian Monsimer, 15. A young nun, Sister St. Francis Xavier, a member of the Sisters of Providence, accompanied them. She was en route to Saint Mary-of-the-Woods in Terre Haute. She wrote back to France that they celebrated Mass six times on the ship to America, and although “the chalice is poor, only copper; the priest (Father Sorin) is gold.”

Father Sorin’s mission was one of education and evangelization, the same mission that the Congregation of Holy Cross holds today. Once in the frontier of Indiana, he discovered that there was already a college nearby, in the town of Vincennes. Additionally, the bishop preferred that the Holy Cross brothers focus on elementary education. Bishop de la Hailandiere continued the dream of his predecessor, Bishop Brute, for colleges and institutions of higher learning in the Diocese of Vincennes — which was complicated by the fact that the diocese included the entire state of Indiana.

In an attempt to resolve the conflict between the mission of Father Sorin and his own preference, Bishop de la Hailandiere gave over to Holy Cross 524 acres in the far northern area of the diocese; land that had been donated by the first priest ever ordained in America, Father Stephen Badin. Father Sorin accepted the far-off property and promised to start a college and novitiate. 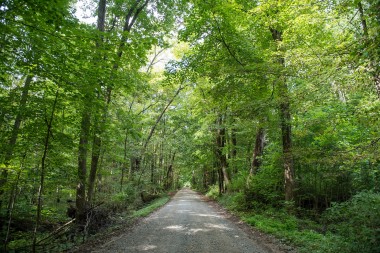 There was a small Catholic community in that area, a faithful remnant from early Jesuit French missionaries; the “black robes” who evangelized many in the late 1700s. Surrounded by mainly Anglo-Saxon Protestants, the other local Catholic groups were French fur traders, a few French Canadian and families, as well as a small band of Native Americans converts, mainly Potawatomi and Miami. There were also poor Irish immigrant laborers who had come to Indiana for work, digging the Wabash and Erie Canals. The newest group of Catholics were disillusioned German and Alsatian immigrants, allured by cheap land that was an opportunity for farming.

During the long and severe winter of 1842, Father Edward Sorin, the Brothers of St. Joseph and a guide, Colliche, set off toward the north for South Bend. Father Sorin was now 29 years old. Two of the brothers, Brother Gatien and Brother Francis Xavier, were French; Novice Patrick Connelly, Novice Basil O’Neill, Novice William O’Sullivan and Novice Peter Tully were Irish immigrants; and Novice Francis Disser was Alsatian. Leaving Nov. 16, the trip took them 11 days.

Father Sorin later wrote to his Superior, Father Basil Moreau, back in France: “Our first day out the cold became so biting that we could not go more than two and a half leagues” or about 8 miles. The total trip was over 250 miles.

They split into two groups as they traveled north, due to the freezing weather and the speed of the horses versus the slower ox cart. Sorin praised his companions as “industrious and courageous” as they tracked through ice, snow and frozen ground, guiding the animals along.

Following the Wabash River, the route went through Washington, then Vincennes and Terre Haute; it continued along tracks beside the river through to Lafayette, Logansport and then directly north to South Bend. The village had taken its name from the unique configuration of the St. Joseph River; however, the brothers took the village’s name as a grace from God. Father Marquette and the French explorer LaSalle used the same St. Joseph portage route years previously.

The first group arrived Nov. 26, 1842. The second group arrived a week later, on Dec. 6, 1842. A few months later, on Feb. 27, the remainder of the original group of Brothers of St. Joseph from France, six more novices and two postulants, arrived. 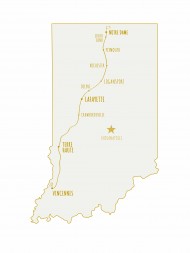 Later, in his famous letter of Dec. 5, 1842, to Father Moreau, Father Sorin wrote of his first view of Notre Dame du Lac.

“Everything was frozen over. Yet it all seemed so beautiful. The lake, especially, with its broad carpet of dazzling white snow, quite naturally reminded us of the spotless purity of Our August Lady, whose name it bears, and also of the purity of soul that should mark the new inhabitants of this chosen spot… May this new Eden be always the refuge of innocence and virtue! He ended the letter by saying: “Finally, dear Father, you cannot help see that this new branch of your family is destined to grow under the protection of Our Lady of the Lake and of St. Joseph. At least, that is my deep conviction. Time will tell if I am wrong.”

On Nov. 30, 1842, Father Sorin celebrated the first Mass at Notre Dame. He offered the Divine Mysteries in a rude chapel in a log cabin, which was the only structure standing on the grounds, in the midst of a mighty forest of oaks.

One hundred and seventy-five years later, the University of Notre Dame is still striving to live Father Sorin’s prophetic words. In remembrance and thanksgiving for his vision and zeal, its leadership sought to celebrate the monumental anniversary in a uniquely Catholic way, opting to commit to a pilgrimage tracing the footsteps of Father Sorin and the six Brothers of St. Joseph. By reliving the journey of the university’s founding on foot, as well as in heart and mind, they feel everyone can be open to the Holy Spirit’s promptings for the next hundred years.

Next August, from the 13th to the 26th, the once-in-a- lifetime pilgrimage retracing the footsteps of the founders is open to “women and men who have one thing in common, a desire to do good in the world,” said Katherine Lane, director of ND Trail.

“The mission endures, the journey continues and the work goes on. We will travel the Notre Dame Trail as a collective renewal of our determination, to rededicate ourselves to Notre Dame’s mission to seek God, study the world, and serve humanity — to forge our own trails through the next frontiers of knowledge and innovation, to boldly lead the way into the new chapters of our story.

“A pilgrimage is a journey of the soul,” Lane continued. “This is distinct in its Catholic roots and humble beginnings, but our mission is constant. We hope this is a celebration of the whole congregation, as well as an opportunity to educate the Notre Dame family and beyond about the rich history of Indiana, Notre Dame and the frontier all growing together.

“Lastly, this is a pilgrimage of Our Lady. Father Sorin wrote of this when he described his hopes to Father Moreau of the college to be ‘a powerful means to do good.’”

There are three ways one can participate in the ND Trail and anniversary celebration; a five-day journey, a three-day journey or the one-day celebration. The five-day journey will begin at Rochester and follow a 67-mile trail — complete with safety precautions. The three-day option will pick up in Plymouth and include a special Mass at St. Pius X Parish in Granger, the old St. Joseph Farm Parish, and include a lovely dinner at the St. Joseph Barn, celebrating the whole congregation —priests, sisters and brothers.

Just announced last week, the one-day celebration on Aug. 26 will be free. Starting at Howard Park in South Bend, a mere 3 miles south of campus, participants will walk along the St. Joseph River. They will follow the East Bank Trail to St. Mary Avenue and enter campus there, as the brothers first did. The first stop will be the Holy Cross Cemetery, to pay respects to Father Sorin and two of the original brothers, who are buried there. Next, the pilgrims will pray at the Grotto and the famous log chapel. Then they will visit the basilica and celebrate Mass outside on Bond Hall Quad, next to the lake where Father Sorin first arrived, giving thanks for all that has been and all that will be. Lunch, live music and a festive outside celebration on the South Quad will also be free and open to all pilgrims.

Registration, which is available online, is required. Visit https://trail.nd.edu.

This is the famous letter written by Father Sorin upon his arrival at the site that would become the home of the University of Notre Dame.

“When we least dreamed of it, we were offered an excellent piece of property, about 640 acres in extent. This land is located in the county of St. Joseph on the banks of the St. Joseph River, not far from the city of St. Joseph, (Michigan). It is a delightfully quiet place, about twenty minutes from South Bend. This attractive spot has taken from the lake which surrounds it the beautiful name of Notre Dame du Lac…. It is from here that I write you now.

Everything was frozen over. Yet it all seemed so beautiful. The lake, especially, with its broad carpet of dazzling white snow, quite naturally reminded us of the spotless purity of our august Lady whose name it bears, and also of the purity of soul that should mark the new inhabitants of this chosen spot. … We were in a hurry to enjoy all the scenery along the lakeshore of which we had heard so much. Though it was quite cold, we went to the very end of the lake, and like children, came back fascinated with the marvelous beauties of our new home. … Once more, we felt that Providence had been good to us, and we blessed God from the depths of our soul.

“Will you permit me, dear Father, to share with you a preoccupation which gives me no rest?

“Briefly, it is this: Notre Dame du Lac was given to us by the bishop only on condition that we establish here a college at the earliest opportunity. As there is no other school within more than a hundred miles, this college cannot fail to succeed. … Before long, it will develop on a large scale. … It will be one of the most powerful means for good in this country.

“Finally, dear Father, you cannot help see that this new branch of your family is destined to grow under the protection of Our Lady of the Lake and of St. Joseph. At least, that is my deep conviction. Time will tell if I am wrong.”