The survey was sponsored by the National Black Catholic Congress and Notre Dame’s Institute for Church Life and Office of the President.

Notre Dame social scientists Darren W. Davis and Donald B. Pope-Davis, who co-authored the report, set out to test the validity of anecdotal accounts that African American Catholics were becoming increasingly disengaged from their religion. Although the primary focus of the survey is on African American Catholics, the researchers utilized a significant comparative component with white Catholics, which resulted in several notable findings about both groups of Catholics.

The survey also is historic in that it represents the largest sample of African American Catholics ever surveyed on their faith. 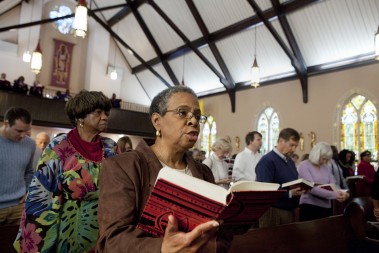 WASHINGTON (CNS) — African-American Catholics are much more engaged in their Church on a variety of levels than are white Catholics, concludes the first National Black Catholic Survey.

Whether in a majority black church, a mixed or mostly white parish, the survey found African-American Catholics feel satisfied and fulfilled in their parishes, explained retired Bishop John H. Ricard of Pensacola-Tallahassee, Fla., who is president of the National Black Catholic Congress.

By “engaged,” Bishop Ricard explained, the authors of the report mean African-Americans are involved in their parishes well beyond simply attending Mass somewhat regularly. That includes having strong networks of friends and family in their churches, participating in multiple parish activities and saying their spiritual, emotional and social needs are met there.

Bishop Ricard, who is rector of the Washington seminary of his religious order, the Josephites, said the results of the survey surprised and pleased him and the leaders of the National Black Catholic Congress who commissioned it, along with the University of Notre Dame’s Institute for Church Life and the office of the school’s president. The survey will be used as the basis of a pastoral plan for evangelization that will be presented during next July’s National Black Catholic Congress in Indianapolis.

“This is a bright spot for the Church,” said Bishop Ricard in an interview Nov. 28 at St. Joseph’s Seminary. Whatever their parish situation, a majority of African-American participants in the attitudinal survey conducted by Knowledge Networks, “feel affirmed and have decided they are going to stay Catholic,” he said. “It’s a very optimistic message.”

“Compared with other religious and racial groups, African-American Catholics behave and look like African-American Protestants,” said the executive summary written by study authors Darren W. Davis, a professor of political science and associate vice president for research at Notre Dame, and Donald B. Pope-Davis, professor of psychology and vice president and associate provost Notre Dame.

The survey was conducted this summer in phone calls to 3,215 people, including 2,104 African-Americans, proportionally representing Catholics and Protestants according to their ratio in the U.S. population. Seventy-six percent of those surveyed said their parish is not predominantly African-American. No margin of error was given.

Bishop Ricard said the finding that black Catholics are almost as at-ease in mixed or mostly white parishes as they are in majority black parishes shows that efforts have been successful in helping African-Americans to feel a part of the Catholic Church and make it their own.

That model could hold lessons for dioceses and churches that are struggling to help immigrants from Latin America and Asia feel like they belong, he said.

Like African-Americans, Latino and Asian immigrants have a strong cultural sense of community, Bishop Ricard said. “There is less emphasis on the individual and more on the communitarian aspects of a church.”

And there also are lessons for all types of parishes that are interested in having their members become more deeply engaged.

Bishop Ricard related the experience of a large Florida parish that made the effort to have the pastor or a member of the parish staff personally visit every one of the 2,000 registered families. Completed over the course of a year, these visits featured conversations about what people wanted from their Church, what was working and not working and what their everyday concerns were, he said.

“It had a significant effect on increasing people’s involvement,” he said. It wasn’t so much that the parish would be able to adapt to all those concerns, but a matter of “making people feel personally involved,” he said.

The survey did find various aspects of Church life where African-Americans consider improvement is needed. Among them that although most African-Americans do not consider the Church racist — 77 percent said they don’t consider it racist — nearly a third have felt uncomfortable being the only black in a church and a quarter have encountered people avoiding them or refusing to shake hands.

But there was also hopeful news when it comes to young adults being involved, the survey found.

It also found that black Catholics were much more likely than their white counterparts to say religion is important in their lives. They also are more likely to say they would turn to their pastor or another church leader for help in times of crisis such as a death in the family, marriage or alcohol problems.