LONDON (CNS) – Holy Cross Father John I. Jenkins, CSC, President of the University of Notre Dame, led a dedication ceremony on Oct. 27 to celebrate the Catholic university’s acquisition of the G.K. Chesterton Collection for its London Global Gateway.

The collection is a treasure trove of the writings, personal effects, art, and other items related to the life of the renowned 20th-century English Catholic writer, orator, apologist journalist, and literary critic. 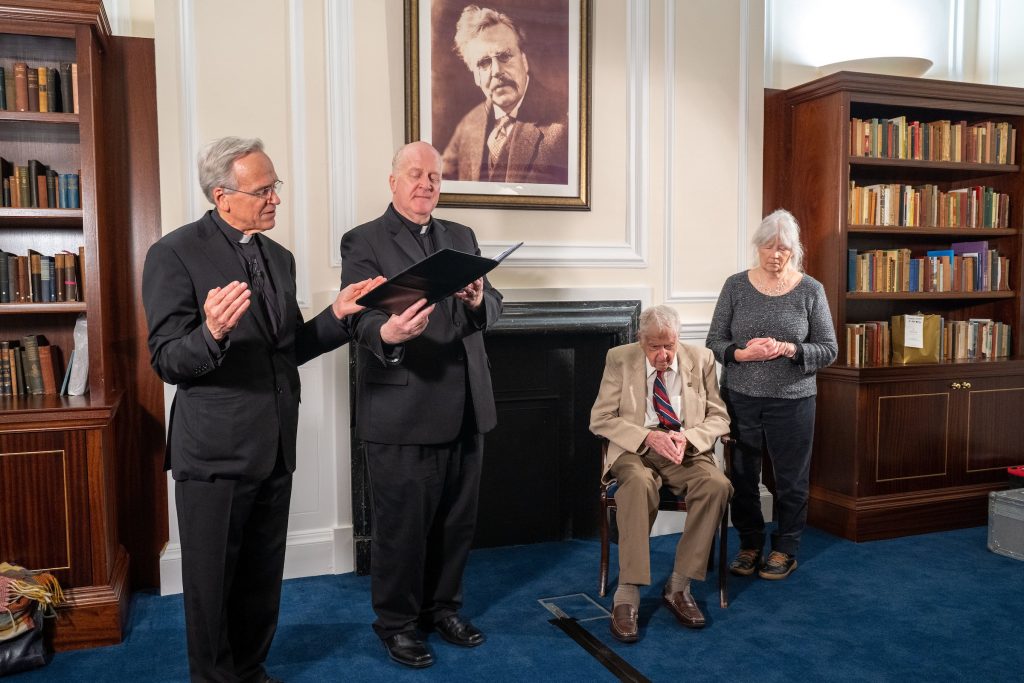 Holy Cross Father John I. Jenkins, president of the University of Notre Dame in South Bend, Ind., prays at the dedication and blessing of the Chesterton Archive at the Catholic university’s London Global Gateway Oct. 27, 2022. Also pictured are Holy Cross Father Jim Lies, senior director for academic initiatives and partnerships for Notre Dame’s London Global Gateway; Aidan Mackey, a G.K. Chesterton expert who founded and hosted the archive in his home for a time; and Mackeys daughter Patricia. (CNS photo/Matt Cashore, University of Notre Dame)

Over the course of several decades, Chesterton expert Aiden Mackey assembled the materials that make up the collection, which has moved from Oxford to the Notre Dame center in central London on Trafalgar Square.

A Notre Dame news release said the transfer of the collection makes the world and work of Chesterton more accessible to scholars and includes a public exhibit for Chesterton devotees who live in or visit London.

“We gather today to give thanks for the life and work of G.K. Chesterton and the remarkable dedication and commitment of Mr. Aiden Mackey in compiling this fine collection,” Father Jenkins said in his prayer of dedication. 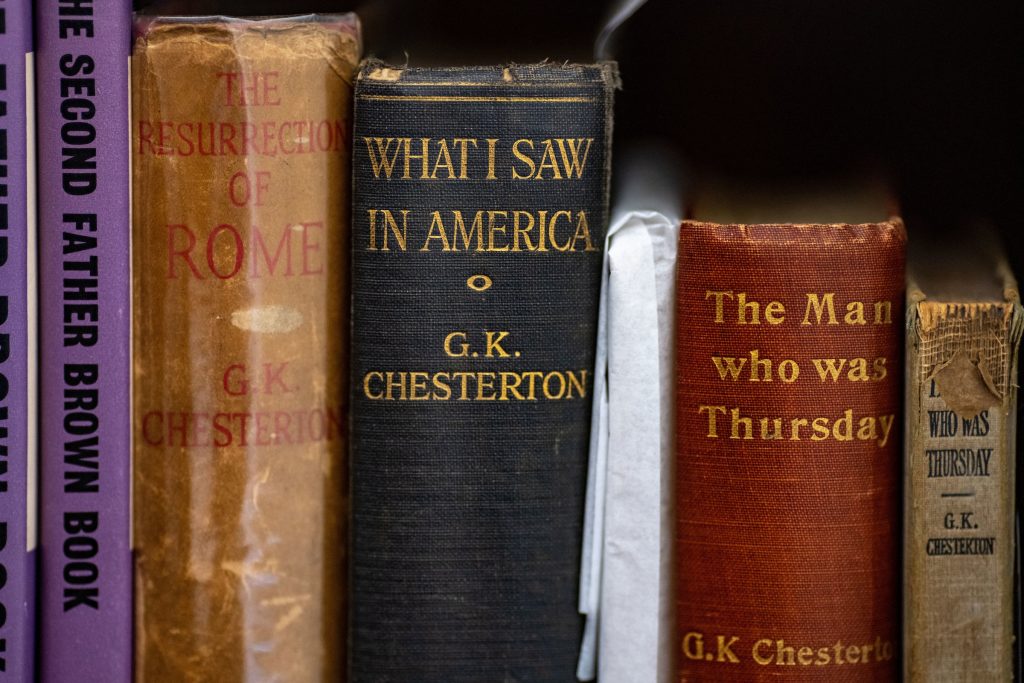 “May Notre Dame’s commitment to educating hearts and minds be furthered by this collection, and may the writings and life of G.K. Chesterton serve as a witness to faith and hope,” he added.

The 100-year-old Mackey attended the ceremony, which was hosted by Notre Dame. Previously he said of the transfer: “The collection’s elevation to so prestigious a home as the London Global Gateway is, for me, warming beyond measure.”

Gilbert Keith Chesterton’s many works include the Father Brown mystery series, the novel “The Man Who Was Thursday,” thousands of short stories, poems, and essays, and his defense of Christianity, “The Everlasting Man,” a book that influenced C.S. Lewis to convert to Christianity.

Notre Dame’s association with Chesterton began nearly 100 years ago. In 1930, at the height of his celebrity, he visited the university in South Bend to deliver 36 public lectures over six weeks and receive an honorary degree.

He attended the first football game at the new Notre Dame Stadium on Oct. 10 of that year, which inspired his poem “The Arena.”

The University of Notre Dame offers study abroad opportunities in more than 25 countries. Its London program, established in 1968, now hosts more than 400 undergraduates, 50 law students and many graduate students and faculty for a semester, summer, or full academic year.

The London Global Gateway also hosts more than 100 conferences and other events each year and places some 100 students in internships with British and international companies, medical centers, Parliament, nonprofits, and other organizations.