ROME (CNS) — With more than half of its seminarians already back in the United States, the Pontifical North American College in Rome is sending its students home.

“In consultation with our board of governors and the U.S. Embassy to the Holy See, we have asked all students at our two campuses to return to their home dioceses in the United States,” said a notice posted on the seminary’s Facebook page March 23, the day after students were informed.

The post said students “will undergo a 14-day quarantine once they arrive home and will continue to pursue formation via the online courses that have been in place for the last few weeks.”

The U.S. State Department March 20 issued a “Global Level 4 Health Advisory,” urging U.S. citizens to avoid all international travel due to the COVID-19 pandemic. “In countries where commercial departure options remain available, U.S. citizens who live in the United States should arrange for immediate return to the United States, unless they are prepared to remain abroad for an indefinite period,” the State Department said.

Particularly after Italy closed all schools and universities March 5 and then ordered a nationwide lockdown March 9, many dioceses already had called their students home, especially transitional deacons who are to be ordained to the priesthood in June.

As of March 16, only 92 of the 192 seminarians remained on the campus on the Janiculum Hill, Father Peter Harman, the rector, had told Catholic News Service. He did not say how many priests, doing graduate studies, were still living at the college’s separate facility, the Casa Santa Maria.

The notice said one of the factors influencing the decision to send all students home was Italian Prime Minister Giuseppe Conte’s announcement March 21 closing all “nonessential” business throughout the country.

Conte’s announcement, the NAC post said, raised questions “regarding the production of goods and the further restriction on the movements of workers.”

“While disappointing,” the post said, the decision to send all the students home “is based on our desire and responsibility to assure that, at this time, our students are closest to the emotional support systems of their diocese and families.”

The ban on travelers from Europe entering the United States was announced by President Donald Trump March 12 and went into effect the following day. U.S. citizens living in or visiting Europe are exempt from the ban, although many flights to the United States have been canceled and planes coming from Europe may land only at designated airports equipped to do a health screening of passengers entering the country. 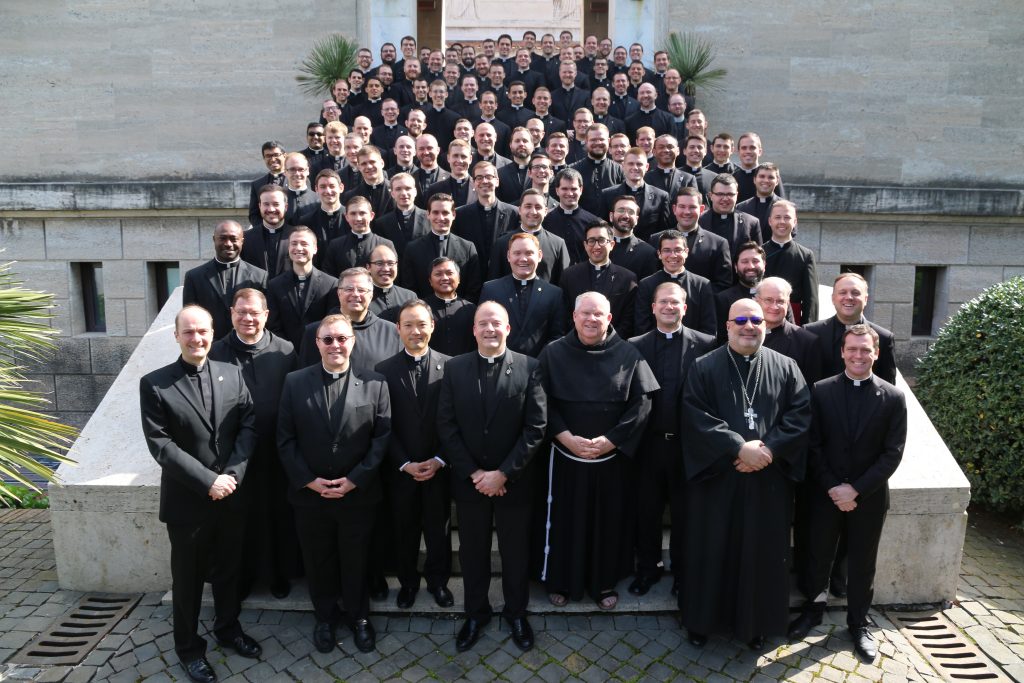 The staff and 92 seminarians at the Pontifical North American College in Rome pose for a photograph March 15, 2020, on the steps leading to the seminary chapel. A week later, the college informed the seminarians that they should return to the United States because of the ongoing COVID-19 pandemic. (CNS photo/courtesy of the Pontifical North American College)