“I didn’t sleep and I threw up all the time. It was very hard on my mother,” said the 16-year-old from Howe.

His allergies finally were identified when the youngster was 6. Both he and his brother Nathan, who is 13, were diagnosed with numerous food allergies, one of which was a wheat allergy that meant a sensitivity to gluten.

Individuals with gluten sensitivity do not produce the enzymes necessary to digest wheat, so their stomachs may not tolerate a regular Communion host.

For the Cook brothers and others like them, the desire to participate in the sacrament of holy Communion meant finding an alternative.

“So I would just go up to Communion and cross my arms,” he said. 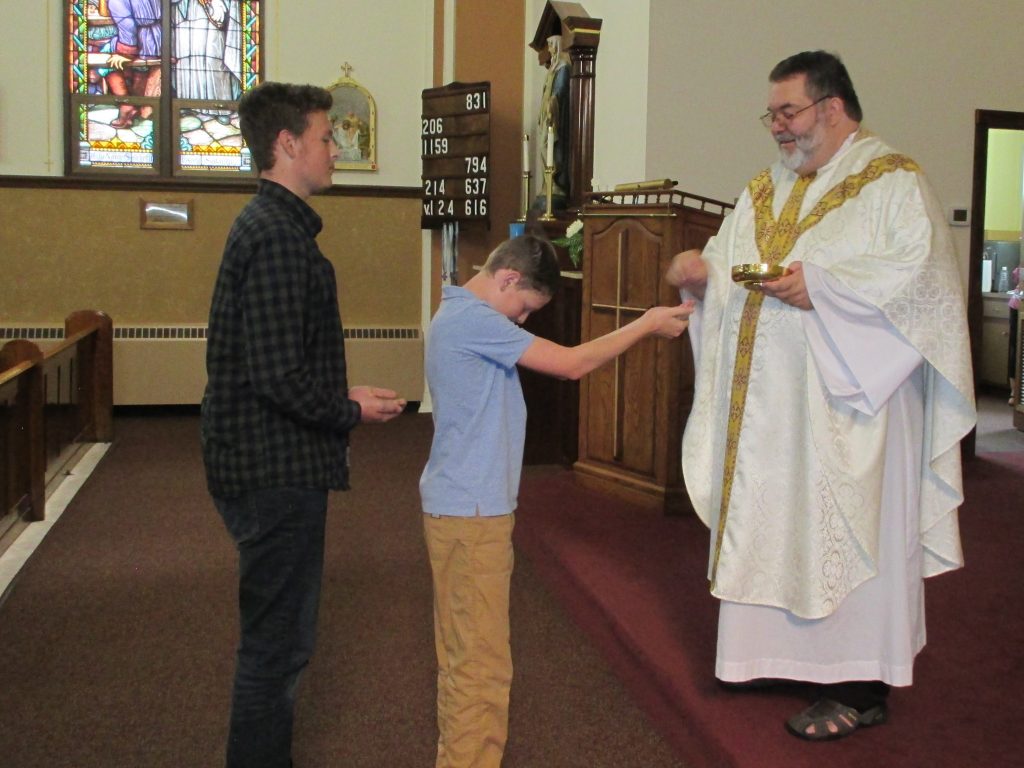 Father J. Steele suggested low-gluten hosts to the Cook brothers’ grandmother to ease concerns about their wheat allergies when he was administrator of St. Joseph Parish in LaGrange, where the family worships.

When his grandmother Delores Henderson talked about this with Father J. Steele, who administered St. Joseph Parish in LaGrange at the time, Father Steele suggested that Lucas and Nathan might be able to receive the Eucharist in the form of low-gluten hosts.

The family had the answer to their prayers. When the boys arrived for Mass they let Father Steele know they were there, and he would place the low-gluten hosts in a pyx for consecration separate from the wheat hosts.

“Given the serious health risk for those suffering gluten intolerance, it is important for pastors and other Church leaders not only to be aware of the reality, but prepared to address the situation of Catholics … who come to parishes and seek to receive Holy Communion in a safe, sensitive, and compassionate manner,” the USCCB guidelines state. 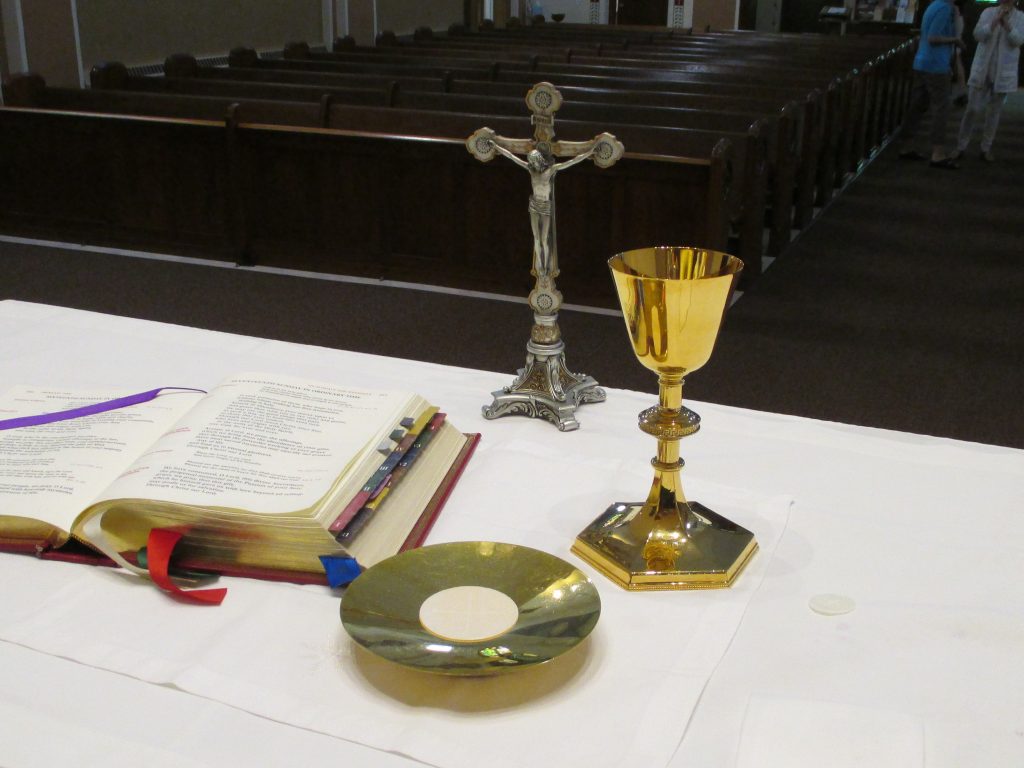 The Catholic Church teaches that a person receiving holy Communion under one or the other species, either the transubstantiated bread or wine, can be confident of the real presence of Christ in the Eucharist. — Photos by Janet Patterson

In 2003, then-Cardinal Joseph Ratzinger issued a letter to the presidents of the conferences of bishops reminding them that “for bread to be valid matter for the Eucharist, it must be made solely of wheat, contain enough gluten to effect the confection of bread, be free of foreign materials, and unaffected by any preparation of baking methods which would alter its nature.”

The letter went on to say that there is no minimum percentage or weight prescribed for validity, but there must be some gluten content.

For people who suffer from celiac disease, however, a small – even a trace – amount of gluten provokes a potentially deadly physical reaction.

In its guidelines for eucharistic ministry to those who have either celiac disease or gluten sensitivity, the U.S. Conference of Catholic Bishops quotes a 2012 Mayo Clinic-led analysis that estimated about 1.8 million Americans have celiac disease, which means they cannot safely ingest even a small amount of gluten.

Cardinal Ratzinger, who later became Pope Benedict XVI, wrote that the lay faithful who could not receive “Holy Communion at all under the species of bread, even of low-gluten hosts, may receive…under the species of wine only, regardless of whether the Precious Blood is offered to the rest of the faithful present…”

In the Catechism of the Catholic Church, No. 1390, and General Instruction of the Roman Missal, No. 282, the Church teaches that the faithful receive the whole Christ whether under the form of the body of Christ or His precious blood. 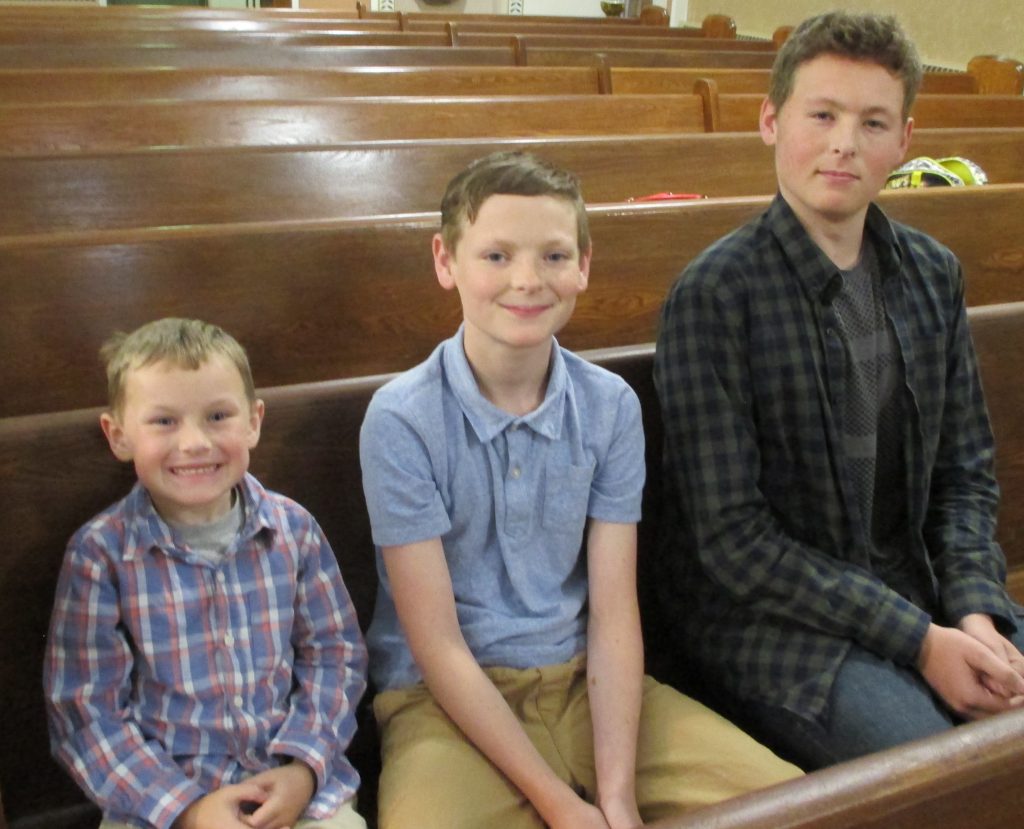 Both Lucas, 16, far right, and his brother, Nathan, 13, have wheat allergies, along with sensitivity to other foods such as dairy and citrus. Younger brother Koby, 5, is allergy-free.

Before Father Steele began to provide the low-gluten hosts for the Cook brothers, Lucas said he found that he could receive the precious blood without a reaction.

In late February, Bishop Kevin C. Rhoades issued a memorandum to pastors of the diocese asking them to keep in mind the faithful who cannot receive even low-gluten hosts because of allergies or celiac disease. Since the precious blood is not distributed in some parishes during flu season, he reminded pastors that it should be made available to those individuals who receive solely from the chalice.

He also reminded pastors that if more than just those with gluten sensitivity will receive the precious blood, “the designated chalice must not yet have been drunk from by anyone who has already received a host,” even a low-gluten host.

The issue of “cross-contamination” also extends to keeping the low-gluten hosts separate from the regular hosts.

Father Tony Steinacker, pastor of SS. Peter and Paul Parish in Huntington wrote about the reception of holy Communion for parishioners with gluten sensitivity in the parish’s March 24 bulletin.

His suggestions include letting an usher know of the need for the low-gluten host when arriving for Mass.

“When you do come up in the communion line, I ask that you come to the line in which the Priest who is offering the Mass is distributing communion. As you present yourself to him, please simply say ‘I need to receive the low-gluten Host or from the separate Chalice,’” he wrote.

“This is just one way that our Parish community can be more welcoming and accommodating to the needs of others,” he noted.

The USCCB states that no medical certification is required to receive low-gluten hosts, and the determination to use low-gluten hosts is delegated to the pastor of a parish by the diocesan bishop.

For more information about low-gluten hosts, go to www.usccb.org/prayer-and-worship/the-mass/order-of-mass/liturgy-of-the-eucharist/celiac-disease-and-alcohol-intolerance.cfm