In every conversation about the newly founded Noble County Right to Life chapter, the word “providential” echoes.

It all started two years ago, according to core team member Lucy Papaik. “We had a providential meeting with about 35 people attending to hear Allen County Right to Life director Abigail Lorenzen.” The meeting came out of several donations that the Rosary Sodality at Immaculate Conception Parish in Kendallville made to the Allen County group.

“The seeds were planted, so when Father (J.) Steele came to the parish in June and said that we need a Right to Life group, I knew it was for the glory of God,” Papaik said.

Before being transferred to Kendallville from St. Joseph Parish in LaGrange, Father Steele said he had been thinking and praying about working toward forming a Right to Life group. 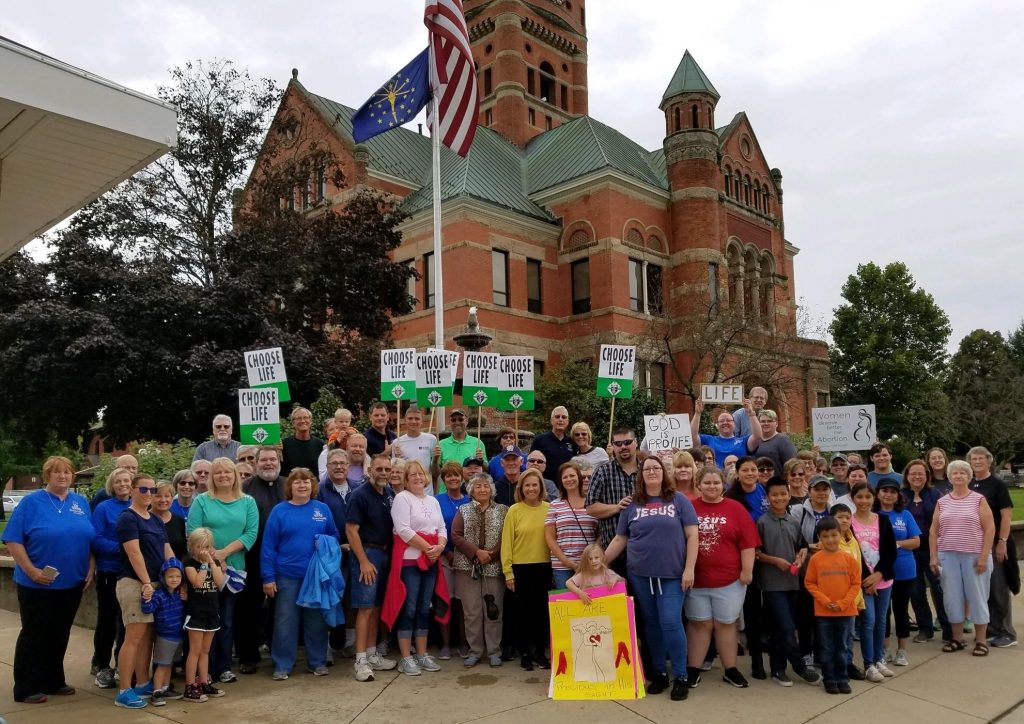 Janet Patterson
Founding members of Noble County Right to Life show support for life to passersby outside the Albion courthouse in mid-October. At the instigation of Father J. Steele and a parishioner of Immaculate Conception Parish, Kendallville, and following an ecumenical viewing of the movie “Unplanned” in September, the organization took form.

In the spring, he and some friends from St. Joseph went to see the movie “Unplanned.” The movie depicts the conversion of Abby Johnson, the youngest clinic director in the history of Planned Parenthood, to an anti-abortion activist.

“While I was sitting there watching the credits, I was thinking about how we can get this movie to other people.” He wanted to see the movie again to think and pray more about his idea; he invited some parishioners from Blessed Sacrament Parish in Albion, where he also serves, to join him.

The seed of his idea for a Right to Life group in the northeastern region of the Fort Wayne-South Bend diocese began to take shape when Father Steele was transferred to Immaculate Conception Parish in June.

“It was all so providential,” he said.

Around that time he heard from Cindy Turner, a board member with the Women’s Care Center in Auburn. “They were hoping to expand into Noble County.” Father Steele met with Turner, Lorenzen and Papaik to make a plan to engage the historic Strand Theater in Kendallville for a showing of “Unplanned.”

“We wondered if we’d even get enough people to fill the small theater,” he said. He began to talk to clergy from other churches in the area, and by the time the Sept. 15 showing was a few weeks away, more than 150 people had purchased tickets. “We sold about 245 tickets to people from 11 churches.”

In addition to his two parishes, Immaculate Conception and Blessed Sacrament, parishioners of St. Joseph in LaGrange, St. Joseph in Garrett, Immaculate Conception in Auburn, St. Gaspar del Bufalo in Rome City and St. Mary of the Assumption in Avilla were represented, along with evangelical churches from Kendallville and Rome City. Several signed up to be part of the new effort and receive membership cards.

Two weeks later more than 90 people gathered in front of the Albion courthouse bearing signs made the week before at Immaculate Conception and Blessed Sacrament to show support for life to passersby.

“It has been a good ecumenical effort,” Father Steele said of the growing effort.

More than 100 people, including members of Noble County Right to Life, also gathered Nov. 2 in the gazebo at Bixler Lake Park in Kendallville for a one-hour prayer service for the unborn that included prayer, music and testimonials in remembrance of the more than 2,000 fetuses found at the home of Ulrich “George” Klopfer, a former doctor who performed abortions in Fort Wayne, South Bend and Gary from 2000 to 2002.