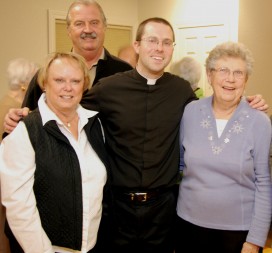 Father Adam Mauman, a descendent of the Nix family, is shown with his parents Cynthia and Richard Gene Mauman, and grandmother Marceline Wall.

Father Mauman’s wish was to say a Mass for Nix relatives at St. Catherine’s Parish as he is a descendant of the Nixes that started the parish.

Jacob Nix, a few generations back, had the first Mass in his home as early as 1848 for the area, before the first church was built. The name Nix Settlement came from the large number of Nix family members who lived in the area.

A large number of Nix relatives attended the Mass celebrated by Father Mauman and the reception following in the church hall. There were over 50 relatives attending, meeting and getting to know each other better and which branch of the Nix family they came from. Attending relatives came from as far away as California, Kentucky, Indianapolis, Muncie, Crown Point, Pleasant Lake, Fort Wayne and the surrounding area.

Seven families of the Nix heritage are currently parishioners of St. Catherine Parish.

Father Mauman was ordained on June 12, 2010. Shortly thereafter began his first assignment as associate pastor at Our Lady of Mount Carmel, in Carmel. He is the son of Richard Gene and Cynthia Mauman, of Marion, and grandson of Marceline Johnson-Wall of Huntington.