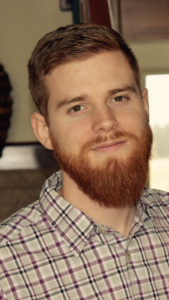 If new St. Therese principal Nick Bobay ever had any doubt that his teaching belonged in a Catholic school, it disappeared in 2013 when he temporarily left the Catholic school system to teach in Fort Wayne Community Schools.

“After graduating IPFW with a degree in music technology, I was immediately hired by Sweetwater Sound,” said the Bishop Dwenger High School graduate, who also possesses a teaching degree from Indiana Wesleyan and is currently finishing his master’s degree in educational leadership at IPFW.

“I soon began searching for something more rewarding than sales and in 2013, Sandra Guffey, who was principal when I attended St. Vincent de Paul elementary school as a student, hired me as a music teacher there. I had been baptized and married there as well, by Msgr. John Kuzmich. Then, in my third year of teaching I briefly left the Catholic school system to teach at North Side High School in Fort Wayne, and immediately found myself missing the Christ-centered approach to education that I had grown up with my entire life. God was definitely calling me back.”

Bobay applied for and was accepted at St. Therese for a position teaching computers and technology.

“Chuck Grimm hired me, and toward the end of that year we started talking about the possibility of me taking on assistant principal responsibilities,” Bobay said.

Last August, Grimm’s cancer became worse. He passed away and left Jeanette Donovan in his place and Bobay as assistant principal. He worked under Jeanette’s leadership for the entire year, but then St. Therese experienced another huge loss: Donovan passed away with just two weeks left in the school year. Bobay took over for the rest of the year, and after immense prayer, contemplation and a conversation with the priest, he came to the conclusion that this is truly what God was calling him to do.

“There is something really special about St. Therese School, which is a combination of the amazing, resilient staff and student body,” he said. “I am truly honored and humbled to assume this responsibility, and I hope to make my mentors Chuck and Jeanette proud.”

Bobay and his wife, Noelle, are the proud parents of a 1½-year-old daughter, Harper Willow. An active musician in the Fort Wayne music scene, Bobay plays with the Todd Harrold Band, which performs at northeast Indiana and Indianapolis shows. He has also played organ and drums in various churches part-time and as a substitute.

Some of his duties as principal include overseeing all the operations of the school and ensuring student and staff success on all levels, said Bobay, whose life has been guided by Proverbs 19:20, “Listen to advice, accept correction, to be the wiser in the time to come.”

“Another philosophy that has had some real guidance for me comes from entrepreneur, author and philanthropist Tony Robbins, who noted, ‘Life is a gift, and it offers us the privilege, opportunity and responsibility to give something back by becoming more.’”