WASHINGTON (CNS) — Supreme Court Justice Ruth Bader Ginsburg, who died Sept. 18 at age 87, has been described in countless tributes as a cultural icon and a giant despite her small size. “Our nation has lost a jurist of historic stature. We at the Supreme Court have lost a cherished colleague. Today we mourn, but with confidence that future generations will remember Ruth Bader Ginsburg as we knew her — a tireless and resolute champion of justice,” said Chief Justice John Roberts in a statement released by the court. Ginsburg was surrounded by her family at her home in Washington when she died from complications of metastatic pancreatic cancer. The second woman appointed to the court, who served there for more than 27 years, is primarily remembered for her pioneering work for gender equality and for writing pointed dissents and asking tough questions. In anti-death penalty and pro-immigrant opinions, she sided with Catholic Church leaders, but she differed with them in her support for legalized abortion, same-sex marriage and the mandate that contraception be covered in all health insurance plans.

PITTSBURGH (CNS) — When it comes to social distancing, cloistered religious communities are way ahead of everyone. For thousands of years, secluded religious orders have been devoted to prayer and work, ordinarily in silence. The physical separation that is part of a cloistered life is a central aspect of their sacrifice for the greater good. Passionist nuns founded, with the help of Passionist fathers, their first American monastery in Pittsburgh in 1910. The nuns then formed the first retreat house for women in the region that includes Pennsylvania, Ohio and West Virginia. Three members of the Passionist nuns in Pittsburgh recently spoke about their lives amid the pain and uncertainty of the COVID-19 pandemic. Sister Mary Grace, who trained in her earlier life as a pharmacist and has been a Passionist for 15 years, said it’s understandable that many people are having difficulty coping during the pandemic. “God made us in his own image, and God is Trinity, Father, Son and Holy Spirit, in relationship,” she said in an interview for Catholic News Service. “Human beings are made for relationship. That’s who we are. And so, to have that dimension cut off is a very painful and difficult thing.”

WASHINGTON (CNS) — Support for Republican President Donald Trump and Democratic presidential nominee Joe Biden from voters who identify as religious appears to adhere to earlier patterns, a Pew researcher told a Georgetown University panel Sept. 15. According to recent Pew Research Center polling, 59% of white Catholics say they’re voting for Trump, with 40% supporting Biden. Hispanic Catholics shift the other direction, favoring Biden 65%. Ninety-two percent of Black Protestants say they’re voting for Biden, and as for Trump, 83% of white evangelicals say they’re either voting for him or leaning in his direction. Elizabeth Podrebarac Sciupac, senior researcher at Pew, said the data also was consistent with exit polls from 2016. “Those might not be too surprising for anyone following these trends,” she observed. Trump voters appear to be more deeply motivated. About two-thirds of white evangelicals say, “their vote for (Trump) is a true vote for him” and not just a vote against Biden, Sciupac said. Abortion, survey results indicate, is a more important issue for white evangelicals (61%) than for white Catholics (38%), Hispanic Catholics (39%) or Black Protestants (33%). The response on abortion trailed the COVID-19 pandemic, foreign policy, immigration and climate change as top election issues.

Knights of Holy Sepulchre give $3.5 million in emergency aid to Holy Land

VATICAN CITY (CNS) — As members of the Equestrian Order of the Holy Sepulchre of Jerusalem around the world were experiencing their own COVID-19 lockdowns, they contributed some $3.5 million to a special fund to support the Latin Patriarchate of Jerusalem, especially its schools and charitable outreach. “Despite the difficult conditions on a global level, generosity was not lacking,” said a statement Sept. 17 from the order’s Vatican headquarters. About 30,000 Catholic men and women around the world are knights or dames of the Holy Sepulchre, pledging to support the church of Jerusalem. Cardinal Fernando Filoni, grand master of the order, announced in May a special COVID-19 Humanitarian Support Fund because “the Holy Land, where the very economic lifeblood of thousands of families lies in religious pilgrimages and tourism, has been seriously affected.

VATICAN CITY (CNS) — It is important to have Christian media that provide quality coverage of the life of the Church and that are capable of forming people’s consciences, Pope Francis said. Professional Christian communicators “must be heralds of hope and trust in the future. Because only when the future is welcomed as something positive and possible does the present become livable, too,” he said. The pope made his remarks Sept. 18 in a private audience at the Vatican with staff members of Tertio, a Belgian weekly magazine specializing in Christian and Catholic perspectives. “In the world we live in, information makes up an integral part of our daily life,” he said. “When it is quality (information), it lets us better understand the problems and challenges the world is called to face,” and it inspires people’s attitudes and behaviors. “The presence of Christian media specializing in quality information about the life of the Church in the world, capable of contributing to the formation of consciences, is very important,” he added.

WASHINGTON (CNS) — Catholic pro-life leaders say they are seeing some progress in the development of vaccines with the use of ethical animal cell lines instead of cell lines derived from abortions. A case in point is the decision by Sanofi Pasteur to no longer use an aborted fetal cell line in producing its polio vaccines, a move recently approved by the U.S. Food and Drug Administration. Sanofi Pasteur, the largest biotech company in the world devoted entirely to vaccines, requested the agency’s approval for switching from using an aborted fetal cell line called MRC-5 to using an ethical animal cell line to produce its polio combination vaccines Pentacel and Quadracel. The vaccines division of the French multinational pharmaceutical company Sanofi is one of the companies currently developing a COVID-19 vaccine by utilizing “cell lines not connected to unethical procedures and methods.” Sanofi Pasteur also recently ended production of its stand-alone polio vaccine, Poliovax, which also had been manufactured using MRC-5, according to the president of the National Catholic Bioethics Center, based in Philadelphia. The corporation will retain another stand-alone polio vaccine, IPOL, that is ethically produced. Joseph Meaney, in a recent statement posted on the centers’ website, www.ncbcenter.org, congratulated the company for its recent initiatives. “The NCBC is pleased to see that progress is being made in this area.” 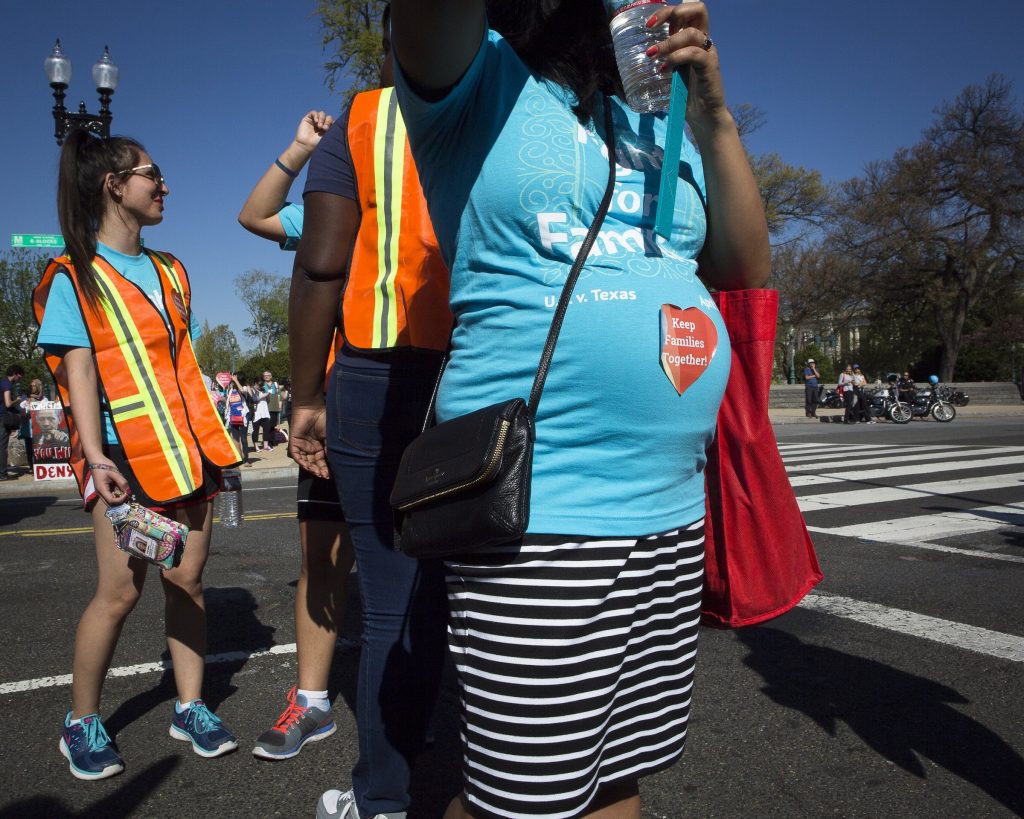 A pregnant woman is seen outside the U.S. Supreme Court in Washington in this 2016 file photo. The Pregnant Workers Fairness Act was passed with a bipartisan vote by the House Sept. 17, 2020. (CNS photo/Tyler Orsburn)