WASHINGTON (CNS) — The U.S. bishops’ migration committee chairman Sept. 15 welcomed a move by House members to include language in the $3.5 trillion budget reconciliation bill to provide a pathway to U.S. citizenship for beneficiaries of the Deferred Action for Childhood Arrivals program and other immigrants. “We are pleased that the House Committee on the Judiciary has taken this important step, setting up an opportunity for many undocumented persons to receive legal status and a pathway to citizenship,” said Auxiliary Bishop Mario E. Dorsonville of Washington, who heads the U.S. Conference of Catholic Bishops’ Committee on Migration. “Undoubtedly, Catholic social teaching will be implicated by many aspects of this budget reconciliation bill, but this is a welcome milestone for many families and the common good,” he said in a statement. Bishop Dorsonville added: “For decades, the bishops of the United States have been proponents of such reforms, which promote integration and family unity. We cannot persist in relegating these members of our society to the margins, especially when we simultaneously depend on so many of them for our collective well-being.” If the budget reconciliation bill passes, the language on citizenship would apply to those covered by DACA, often called “Dreamers,” as well as Temporary Protected Status holders, Deferred Enforced Departure beneficiaries, and agricultural workers and other essential workers who are in the country without legal permission.

WASHINGTON (CNS) — Helping workers win their rights and achieve dignity in the workplace is just one of the many activities funded by national grants from the Catholic Campaign for Human Development, the U.S. bishops’ domestic anti-poverty program. Workers’ rights were front and center during a Sept. 15 webinar, “CCHD and Worker Justice,” sponsored by the Catholic Labor Network. The focus was on the Chicago Workers’ Collaborative, which has been the recipient of national CCHD grants since the 2000s. “The Catholic Church was the first grantor, and has supported us throughout our journey,” said Tim Bell, executive director of the collaborative. The collaborative helped Barry Rose, who took part with Bell in the webinar. Rose called himself “a temp worker and returning citizen.” After his release from prison, Rose said, he heard the familiar taunts that he would soon be returning to jail. Rose signed up with a temp agency in Chicago called Elite Staffing, which sent him to a factory. “It was OK, but the conditions I saw were really, really too hot,” he recalled. “We was sweating up a storm.” Rose lasted eight months until he complained. He next got a temp job at Gold Standard Bakery, which supplies bread products to Burger King and Starbucks locations in the Chicago area. Once he was hired as a permanent worker — no longer a temp — “the people elected me to be on the (union) bargaining committee. So when I was fighting for their raises … they elected me to be the union steward,” Rose said. Bell said there are an estimated 800,000 temp workers in Illinois. “Barry helped get the Responsible Jobs Creation Act passed, the strongest temp workers jobs law in the country.”

Pope: Bishops must handle Communion debate as shepherds, not with censures

ABOARD THE PAPAL FLIGHT FROM SLOVAKIA (CNS) — The debate about denying Communion to politicians who support abortion must be handled in a pastoral way, not by public condemnations that seek to “excommunicate” Catholics who are not in line with Church teaching, Pope Francis said. During his return flight from Bratislava, Slovakia, Sept. 15, the pope said that while there is no question that “abortion is homicide,” bishops must take a pastoral approach rather than wade into the political sphere. “If we look at the history of the Church, we can see that every time the bishops did not act like shepherds when dealing with a problem, they aligned themselves with political life, on political problems,” he said. The pope told journalists that when defending a principle, some bishops act in a way “that is not pastoral” and “enter the political sphere. And what should a shepherd do? Be a shepherd. Not going around condemning. They must be a shepherd, in God’s style, which is closeness, compassion and tenderness.”

VATICAN CITY (CNS) — Pope Francis praised Catholic lay movements and associations for living out the Gospel in their everyday lives and for promoting education, social support and evangelization in the world’s peripheries. They show how “we don’t have to wait for a priest to come, for the priest to evangelize or a missionary,” he said, applauding the way many movements have reawakened the understanding that all the baptized have the duty to evangelize and be a missionary of the Church. However, just like the world’s religious orders and congregations, the pope said, lay movements and associations of the faithful are just as susceptible to abuses and problems, all of which stem from an abuse of power. All associations, not just some or just the large ones, must learn what good governance entails, he added. The pope spoke Sept. 16 in the Vatican’s synod hall to people taking part — online and onsite in Rome — in a meeting organized by the Dicastery for Laity, the Family and Life, focusing on the issue of responsible governance in lay movements and associations. Participants included “moderators” of associations of lay faithful, movements and new communities. The pope told them: “To govern is to serve. The exercise of governance within associations and movements is a topic that is particularly close to my heart, especially considering — what I said before — the cases of different kinds of abuse which have occurred in these situations, too, and that they always find their roots in the abuse of power.”

WASHINGTON (CNS) — The Basilica of the National Shrine of the Immaculate Conception in Washington has collected and donated nearly half a million dollars to assist the restoration and rebuilding efforts of the Notre Dame Cathedral in Paris, which was extensively damaged in a fire two years ago. The donation was made Sept. 16 during a Mass celebrated by Washington Cardinal Wilton D. Gregory in the national shrine’s Crypt Church. He called the gift to “our sisters and brothers in France” for the cathedral’s repair “an expression of our deep affection and support as they continue the restoration of Notre Dame de Paris. Our local response (to the blaze) in the United States of America was to join millions of people in pledging to help to restore this world treasure,” Cardinal Gregory said. Cardinal Gregory, who as archbishop of Washington is chairman of the national shrine’s board of trustees, was the principal celebrant of the Mass. Concelebrants included Msgr. Patrick Chauvet, archpriest and rector of the Paris cathedral; Msgr. Walter Rossi, rector of the national shrine in Washington; and Msgr. Vito Buonanno, the shrine’s director of pilgrimages. Noting the Notre Dame Cathedral “has welcomed countless millions of people for centuries — some have actually been saints while others were great sinners,” Cardinal Gregory said, “May our gift assist the people of Paris in restoring a place of prayer and beauty for those who visit that world famous shrine in the centuries that will follow.”

MEXICO CITY (CNS) — A Vatican official urged Mexican bishops to prioritize migrant ministries — even in dioceses without significant migrant flows — saying, “No diocese exists in Mexico that can avoid this call.” In a Sept. 13 virtual presentation for Mexican priests and bishops, Cardinal Michael Czerny, undersecretary for migrants and refugees at the Vatican Dicastery for Promoting Integral Human Development, described a deteriorating situation for migrants traveling through the country and seeking asylum and noted, “All of Mexican territory is being impacted by emigration, transmigration, immigration, returned people or internal displacement.” The cardinal’s call for prioritizing migrants comes as the number of migrants arriving at the U.S. southern border reaches levels not seen in two decades, while Mexico is again acting as a buffer country to stop migrants deep within its own territory. In southern Chiapas state in recent weeks, Mexican security forces have broken up four caravans — mobilizations of migrants, including many Haitians, living in squalor as they wait for safe-passage documents or asylum claims to be processed. On the northern border with the United States, migrants are being returned to Mexico under Title 42 — which facilitates expulsions due to health conditions — and Mexico has been asked to go along with a plan known as Remain in Mexico for keeping asylum-seekers in Mexico as their cases are heard in U.S. courts. Cardinal Czerny called on bishops to raise awareness and organize to meet migrants’ social and spiritual needs. He also said a response could come through “instructions and messages, which illuminate congregations and attack the causes that force people to abandon their homelands.” 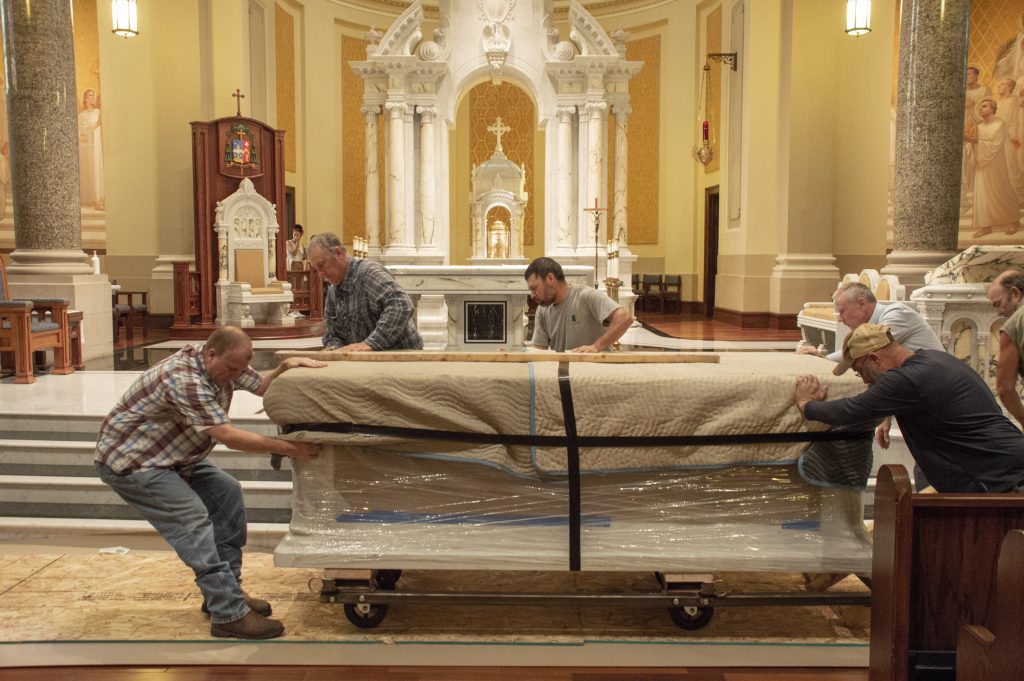 Workmen in the Cathedral of the Immaculate Conception in Wichita, Kans., move a marble tomb Sept. 13, 2021, where the remains of Father Emil Kapaun will be interred. (CNS photo/Christopher M. Riggs, Catholic Advance)