MADRID (CNS) — A Spanish court has convicted a former Salvadoran colonel for the murders of five Jesuit priests in 1989 — a rare act of justice for an atrocity from El Salvador’s brutal civil war. In a Sept. 11 ruling, former Col. Inocente Orlando Montano, 77, was found to have planned and ordered the murders of the five Jesuit priests — all Spanish nationals — Nov. 16, 1989, at their residence on the campus of Jesuit-run Central American University in San Salvador. The five Spaniards were Father Ignacio Ellacuria, university rector, along with Fathers Ignacio Martín-Baro, Juan Ramón Moreno, Amando López and Segundo Montes. Salvadoran Jesuit Father Joaquín López and Julia Elba Ramos, a housekeeper, and her teenage daughter Celina, also were killed in the attack. The court could only rule on the cases of the five Spanish Jesuits as a condition of Montano’s extradition to Spain from the United States in 2017. Montano resided in the United States prior to his extradition.

PORTLAND, Ore. (CNS) — While the foothills of Oregon’s Cascade Mountains have been ablaze, creating red apocalyptic skies and leaving five small towns in ashes, most of the churches in the Archdiocese of Portland have not burned and many have offered shelter to thousands of evacuees. On Sept. 9, two deaths in Marion County and one in Jackson County were reported, but Oregon Gov. Kate Brown said she feared that many more lives were lost. Ann Brophy, pastoral associate at Sacred Heart Church in Medford, stood on her front porch the night of Sept. 8 and watched the small towns of Phoenix and Talent incinerate just a few miles south. “It was terrifying,” said Brophy, who lives in an area where residents are to be ready to leave at a moment’s notice. One Sacred Heart parishioner in Phoenix lost her mobile home to flames not long after gathering up photographs of her husband, who died two years ago. Brophy said she expects that many more parishioners will report being suddenly homeless.

VATICAN CITY (CNS) — European countries can turn the migration crisis into a “window” of opportunity, dialogue and encounter between migrants and their citizens, Pope Francis said. “No one can remain indifferent to the human tragedies that continue to occur in different regions of the world. Among these, we are often challenged by those that have as their theater the Mediterranean, a border sea that is also, however, a sea of encounter among cultures,” the pope said Sept. 10 during a meeting with members of Snapshots from the Borders. According to its website, Snapshots from the Borders is a three-year project co-funded by the European Union. Its goal is “to improve the critical understanding of European, national and local decision makers and of public opinion” about the flow of migrants in Europe “to promote more effective policy coherence at all levels.” Welcoming the group to the Vatican, the pope praised the project, which allows European societies “to give a more human and coordinated response to the challenges of contemporary migration.”

PORTLAND, Ore. (CNS) — Megan Kreft, a young Catholic physician assistant in the Portland area, hopes her story of being fired by a Catholic medical group for wanting to practice her faith in the medical field will help others struggling to do the same. “I’ve known I wanted to go into medicine for a long time,” Kreft told the Catholic Sentinel, newspaper of the Archdiocese of Portland. She was cautious about pursuing work in women’s health and primary care, knowing that so many of the ethical dilemmas she would face would be in those fields. Still, Providence Medical Group in Sherwood, Oregon, impressed her. “I was blown away by the clinic, the support, the staff and their enthusiasm for great patient care,” said Kreft, adding that Providence appealed to her because of its Catholic identity. She was offered a position in January 2019. Before Kreft was hired, an administrator at her clinic reached out asking which services she’d perform. On the list were vasectomies and inserting intrauterine devices, as well as prescribing hormonal contraception and emergency contraception. “I told my manager these services violated my religious beliefs and conscience,” said Kreft. When it became clear to Kreft that she was expected to provide these services or refer patients to another of the clinic’s providers for them, her opinion of the clinic changed. She refused to refer patients for the controversial services. Since her dismissal, she has filed a civil rights complaint with the Office of Civil Rights of the Department of Health and Human Services.

VATICAN CITY (CNS) — In a letter to people participating in a virtual Marian pilgrimage, Pope Francis offered words of encouragement to families struggling amid the COVID-19 pandemic. The pope’s message, which was signed on his behalf by Cardinal Pietro Parolin, Vatican secretary of state, was sent to Bishop Stefano Russo, secretary general of the Italian bishops’ conference, and to participants in the 13th Annual National Pilgrimage for Families to Pompei and Loreto. The Vatican published the message Sept. 13. In it, Cardinal Parolin conveyed the pope’s gratitude to the promoters of the pilgrimage for organizing the event “in this time in which families are suffering particularly from the hardships due to the pandemic,” and he encouraged them to “draw hope and strength from prayer and fraternal communion in order to move forward.”

ALBANY, N.Y. (CNS) — This is a typical story, really about Paulist Fathers, a floating Tiki bar and a kayaker. It all started when Greg Barrett, a captain for Tiki Tours, offered the Paulist Fathers — two fathers and five seminarians — a free, relaxing tour around Lake George, which is 60 miles north of Albany, in August. Paulist Father Frank Desiderio is the director of St. Mary’s of the Lake, the summer retreat for the fathers since 1875, and Barrett lives next door to the retreat’s housekeeper, Vicki Butz. Barrett was talking with Butz one night on his back porch about taking the Paulist Fathers out on the boat saying, “My mother was a very devout Catholic, and I said these guys need to come out on the Tiki boat. (And a couple of months later,) the guys said, ‘Let’s go!’ During the outing they spotted a man struggling with his capsized kayak on the lake and pulled him out of the water and onto the boat, which made national news. The seminarians and novices, who are studying at The Catholic University of America in Washington, were staying at the retreat for 10 weeks this summer to get out of the city during the pandemic. 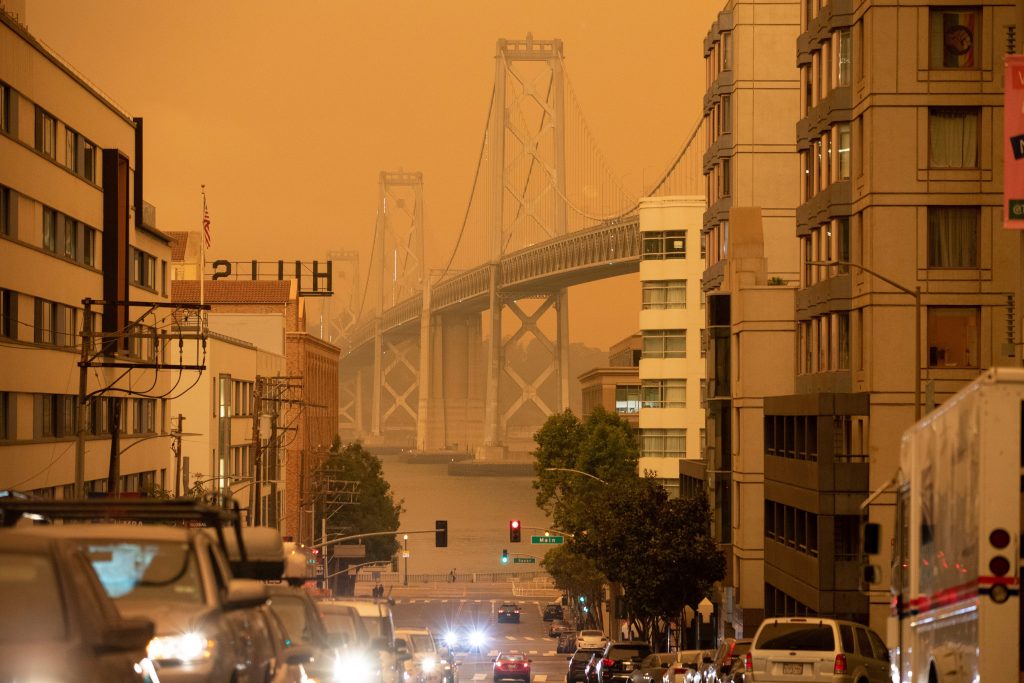 The Bay Bridge in San Francisco is seen Sept. 9, 2020, under an orange sky darkened by the smoke from wildfires. (CNS photo/Stephen Lam, Reuters)