WASHINGTON (CNS) — Archbishop Jose H. Gomez of Los Angeles, president of the U.S. Conference of Catholic Bishops, has asked his fellow bishops to consider having  their parishes take up a special collection to aid dioceses and parishes stricken by recent natural disasters. “The traditional storm season has only just begun and already we have witnessed the devastating impact of Hurricane Laura and the California wildfires,” the archbishop wrote in a letter to his fellow bishops. “Thousands of homes, businesses, and churches have been severely damaged or destroyed and the impacts will be long-lasting.” Archbishop Gomez acknowledged the severity of the impact of COVID-19 on parish and diocesan activities and its challenging impact on fundraising, but he also expressed hope in the generosity of the faithful and their care for those in need. “We offer our prayers to families who have lost loved ones, homes and businesses,” Archbishop Gomez said. Funds collected will become part of the Bishops Emergency Disaster Fund and will be used to support the efforts of Catholic Charities USA and/or Catholic Relief Services, according to Archbishop Gomez. The U.S. Conference of Catholic Bishops will also be allotted some of the collections’ proceeds for pastoral and reconstruction needs of the Church. The collection will take place in the Diocese of Fort Wayne-South Bend the weekend of Sept. 19-20.

Lack of respect for life, for nature have same root, pope says

VATICAN CITY (CNS) — A lack of respect for human life from conception to natural death and a lack of respect for the environment are both signs of a person claiming power over something that is not theirs to control, Pope Francis said. “They are the same indifference, the same selfishness, the same greed, the same pride, the same claim to be the master and despot of the world that lead human beings on the one hand to destroy species and plunder natural resources and, on the other, to exploit poverty, to abuse the work of women and children, to overturn the laws of the nuclear family (and) to no longer respect the right to human life from conception to its natural end,” the pope said Sept. 3. Pope Francis made his remarks in a speech written for a group of laypeople advising the French bishops’ conference on ways to promote and implement the teaching of “Laudato Si’, on Care for Our Common Home.” The group, which included the actress Juliette Binoche, traveled to Rome by train as a carbon-saving alternative to traveling by plane. The Vatican press office said the pope handed his prepared text to members of the group and then had an unscripted conversation with them, telling them that his own “ecological conversion” began in 2007 by listening to Brazilian bishops at the Latin American bishops’ meeting in Aparecida, Brazil.

WASHINGTON (CNS) — Given the “somber” realities imposed by the coronavirus pandemic, for companies to put profits over safety is “unjust,” said Archbishop Paul S. Coakley of Oklahoma City, chairman of the U.S. bishops’ Committee on Domestic Justice and Human Development, in the U.S. bishops’ annual Labor Day statement. Even before the pandemic, “a significant number of Americans were trapped in low-wage jobs, with insecurity around food, housing and health care, and with little opportunity for savings or advancing in their career,” Archbishop Coakley said in the statement, issued Sept. 2. “Those same workers have been hit particularly hard, and, it is devastating to say, many have paid with their life. As one New York subway worker put it: ‘We are not essential. We are sacrificial.’” Archbishop Coakley quoted Pope Francis in his exhortation,”Evangelii Gaudium,” saying: “Today we also have to say ‘thou shalt not’ to an economy of exclusion and inequality. Such an economy kills. What was wrong before the pandemic has been accelerated now,” Archbishop Coakley said. “What may have been hidden to some is now revealed. Against this backdrop, the murder of George Floyd was like lighting a match in a gas-filled room.”

VATICAN CITY (CNS) — Pope Francis will travel to Assisi Oct. 3 to sign an encyclical on the social, political and economic obligations that flow from a belief that all people are children of God and therefore brothers and sisters to one another. The Vatican press office, confirming the pope’s trip, said the document will be titled “Fratelli Tutti” in Italian. In English, the phrase could be translated as “Brothers and Sisters All,” but apparently it is inspired by what is known as St. Francis of Assisi’s “sixth admonition” to the friars, all of whom were men. Conventual Franciscan Father Mauro Gambetti, custodian of the Assisi convent, said the document “will indicate to the world a style for the future and will give the Church and people of goodwill the responsibility for building it together.” Pope Francis is scheduled to arrive at the Assisi convent at 3 p.m. to celebrate Mass at the tomb of St. Francis and sign the document. Because of ongoing concerns and restrictions due to the COVID-19 pandemic, the Mass and the rest of the pope’s visit will be private, the Vatican press office said.

WASHINGTON (CNS) — Father Augustus Tolton, who in 1886 became the first identified Black priest ordained for the United States, challenged the status quo to bring about social change. Father Tolton lived a life of joy, rooted in his desire to help others and humbly work to achieve equality and justice for all, said participants of a panel discussion about the priest’s legacy. The online presentation Aug. 29, titled “Tolton’s Legacy: A Roadmap to Unity,” was organized by the Tolton Ambassador Corps, a nationwide group of Catholics commissioned to spread awareness about the significance of Father Tolton’s cause for sainthood. The Archdiocese of Chicago opened Father Tolton’s sainthood cause in 2010. Pope Francis declared him “venerable” in June 2019 after a theological commission unanimously recognized his “virtuous and heroic life.” Two steps of the process remain: beatification and canonization. Father Tolton served as a parish priest in Chicago, where he died in 1897 at age 43.

VATICAN CITY (CNS) ‚— Franciscan Father Francesco Patton, custos of the Holy Land, asked Catholics around the world to make a virtual pilgrimage to the Holy Land and make a real donation to support the Church in the region. “Here in Jerusalem, we haven’t seen a pilgrim in six months,” he told the Vatican newspaper, L’Osservatore Romano. Pilgrimages are a major source of support for the Catholic Church in the region, “but most of all they are the exclusive source of income for thousands of families, especially Christians,” who work in the tourist industry, Father Patton said. Because of the COVID-19 lockdown, Pope Francis transferred the date of the Good Friday collection for the Holy Land to Sept. 13, the eve of the feast of the Exaltation of the Cross. Speaking to L’Osservatore Romano Sept. 8, Father Patton said he knows Catholics around the world are struggling financially because of the pandemic, but all Christians have a connection to the land where Jesus was born, lived, died and rose from the dead. 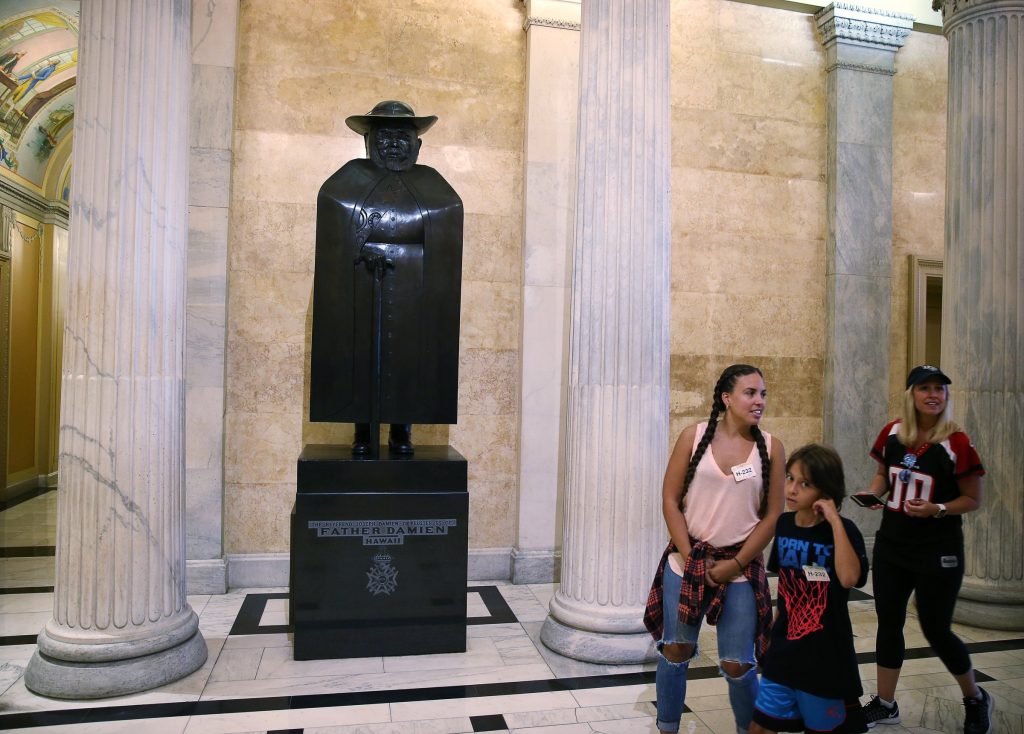 A sculpture of St. Damien of Molokai is seen at the U.S. Capitol in Washington in this 2017 file photo. (CNS photo/Tyler Orsburn)