ALEXANDRIA, Va. (CNS) — With several Northeast states now joining major metropolitan regions in the Gulf Coast as Hurricane Ida-related disaster areas, Catholic Charities agencies are using virtual deployment systems refined during the coronavirus pandemic to maximize their outreach to those in need. Prolonged power outages or record flooding are making quick disaster response access to the greater New Orleans and New York City areas an impossibility following the remnants of Hurricane Ida as it marched north after making landfall Aug. 29 in Louisiana. Right now, disaster response teams are turning to digital workaround solutions using staff members well outside the disaster zones. “COVID set the stage for being able to do virtual deployment: instead of a physical person on the ground, staff can assist by doing phone calls, setting up shared documents on the internet, and taking an administrative burden off the local staff,” said Kathleen Oldaker, senior director of disaster strategy for Catholic Charities USA. As it did during Hurricane Katrina, Catholic Charities in the Diocese of Baton Rouge, Louisiana, is expected to serve as the central supporting role in recovery efforts in hard-hit New Orleans and Houma-Thibodaux.

WASHINGTON (CNS) — The chairmen of two U.S. bishops’ committees echoed Pope Francis’ invitation to cultivate an “ecological conscience” in response to growing environmental challenges that affect human life in a message for the World Day of Prayer for the Care of Creation. “Our times require robust consciences, capable of wise discernment in the face of complex moral problems,” said Archbishop Paul S. Coakley of Oklahoma City, chairman of the Committee on Domestic Justice and Human Development, and Bishop David J. Malloy of Rockford, Illinois, chairman of the Committee on International Justice and Peace. Observed Sept. 1, the day opens the Season of Creation, a five-week period set aside annually to allow individuals to reflect and pray about how they can protect the earth from the unfolding ecological crises resulting from climate change, widespread pollution and degradation of the environment. While focusing largely on the pressing need to address environmental concerns, the prelates’ message also quoted Pope Francis’ March 2021 speech celebrating St. Alphonsus Liguori as a doctor of the Church. The pope then cited “countless challenges” to humanity, including the defense of life, advancing artificial intelligence, threats to democracy and “the urgency of brotherhood. These ‘countless challenges’ must be met with a deep and well-formed faith,” the three-page statement said. “Indeed, one of the underlying drivers of our current crisis, both moral and ecological, is a radical world view that has placed excessive trust in the power of mankind and disregarded God.” The full statement is available online at bit.ly/2WOWqA6.

INDIANAPOLIS (CNS) — This is the way Emily Mastronicola dreamed it would be. On the last day of a grueling, weeklong journey that tested people’s hearts and spirits, the 26-year-old Catholic woman from Indianapolis took the lead of a team of cyclists preparing to meet with other groups from across the country for a triumphant, last-mile ride together toward the “Celebration of Life” finish line in St. Louis. Even the challenge of riding her bike up a 15-mile stretch of daunting hills couldn’t sap the joy that Mastronicola was feeling July 17, the final day of the national ride of “Biking for Babies.” The pro-life organization’s mission is: “renewing the culture of life, one pedal and one pregnancy resource center at a time.” With those 15 miles behind her — on a day when she rode 120 miles — Mastronicola could not stop smiling as she lined up with the other 49 riders who had biked from Ohio, Alabama, Colorado and Wisconsin for that final mile together. “Everyone was so tired but full of joy to be there and meet the other people,” she recalled. “Riding in together was beautiful, really beautiful.”

Mexican bishops concerned over fate of migrants, including Haitians

MEXICO CITY (CNS) — The Mexican bishops’ migrant ministry has disavowed a proposal from Mexico’s National Immigration Institute that would establish a camp for migrants and asylum-seekers stuck in the southern city of Tapachula, near the border with Guatemala. The issue seems to have generated some confusion. In a brief statement issued Sept. 2, the bishops’ ministry said the idea of a camp for Haitians in Tapachula was proposed publicly to the migrant ministry during a conference on migration “without the existence of any agreement or acceptance of this topic. The (ministry) is concerned about the conditions in which migrants find themselves in Tapachula: overcrowding, insecurity or lack of work, which can lead to violations of the human rights of these people,” the bishops’ statement said. Responding to the National Immigration Institute, the Mexico office of the U.N. High Commissioner for Refugees said in a Sept. 2 tweet that the institute “had just sent the request” and the “issue of the Haitians is complicated.” The statements followed news of three caravans of migrants — involving many Haitians — setting out from Tapachula, in an attempt to reach central and northern Mexico and the U.S. border. Mexican immigration and security forces have impeded the caravans, which have proceeded along a coastal highway in Chiapas state.

MANCHESTER, England (CNS) — The Anglican bishop of Ebbsfleet stepped down from office after announcing that he will become a Roman Catholic. The resignation of Bishop Jonathan Goodall was announced by Anglican Archbishop Justin Welby of Canterbury in a Sept. 3 statement released by Lambeth Palace. Bishop Goodall is a former ecumenical secretary to a previous archbishop of Canterbury and was ordained in 2013 to serve as a “flying bishop” of a diocese erected to cover traditionalist parishes that would not accept women priests. “I am deeply grateful to Bishop Jonathan for his ministry and many years of faithful service,” Archbishop Welby said. “My prayers are with him and Sarah, both for his future ministry and for the direction in which they are being called in their continuing journey of dedicated service to Christ,” he said. He continued: “With regard to the see of Ebbsfleet, we will be starting a process of consultation with colleagues and others — including the parishes to whom Bishop Jonathan ministers — to determine what the next steps will be.”

Vietnamese archbishop as COVID-19 surges: ‘How can our hearts not ache?’

HO CHI MINH CITY, Vietnam (CNS) — Archbishop Joseph Nguyen Nang of Ho Chi Minh City has encouraged people in his archdiocese, a COVID-19 epicenter, to cling to hope and support one another. He said local people have been in lockdown for three months to contain the delta variant outbreak but remain at grave risk of infection, reported ucanews.com. “Difficulties and challenges now are no longer just food and medical and financial supplies, but psychological and spiritual suffering because our loved ones are infected or have passed away hastily without immediate cremation. They will return in urns of their ashes,” he said. The Center for Disease Control in Ho Chi Minh City reports an average of 241 deaths daily. Archbishop Nang noted priests and religious have died of COVID-19, while many others have recovered. Binh An Parish recorded 70 deaths during July and August, and many other parishes have 10-20 deaths. Many families have two or three dead relatives, while some families have no one left, ucanews.com reported. “How can our hearts not ache when we witness these distressing scenes and see children left alone because their families died from COVID-19?” Archbishop Nang asked. 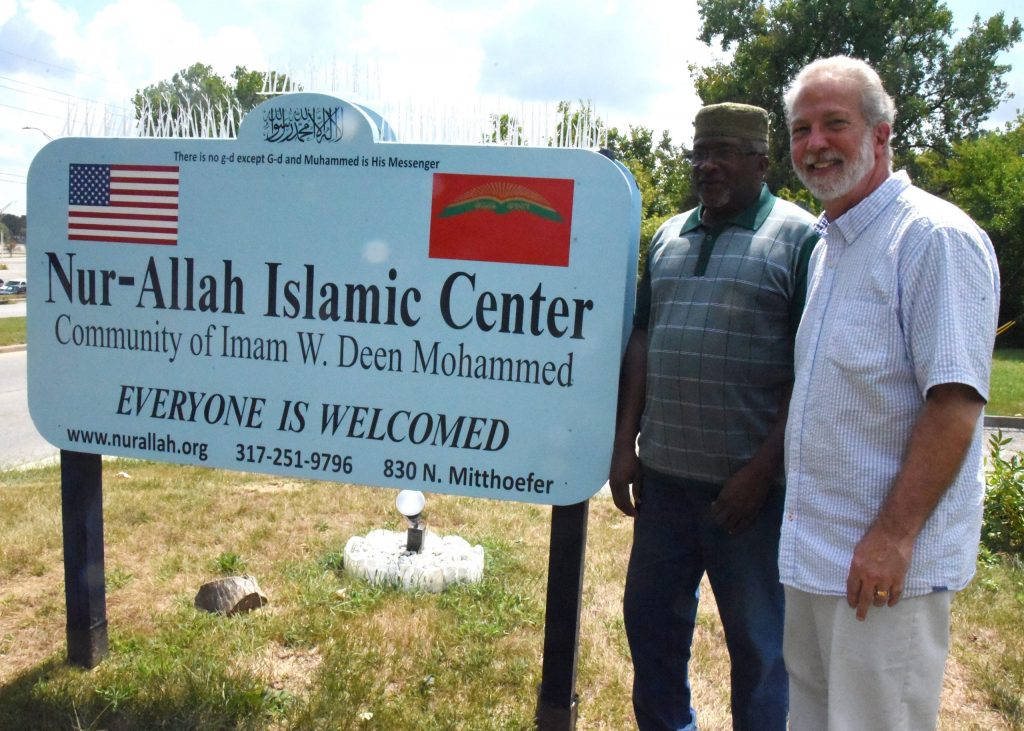 Michael Saahir, left, and John Mundell stand by the sign of the Nur-Allah Islamic Center in Indianapolis Aug. 26, 2021. The pair and other Muslims and Catholics in Indianapolis have had a close relationship since 1997 that was tested in the days following the terrorist attacks of Sept. 11, 2001. (CNS photo/Sean Gallagher, The Criterion)