DHAKA, Bangladesh — Weeks after devastating floods affected millions and killed more than 100 people in Bangladesh, many families are reeling from a lack of aid as the country suffers an outbreak of waterborne diseases. Monsoon flooding in 28 of the country’s 64 districts affected more than 7 million people, left tens of thousands of houses uninhabitable and destroyed crops over vast areas, ucanews.com reported. During a week of flooding, at least 114 people died and 14,000 others became ill from various diseases and infections, according to government data. The crisis eased somewhat in recent weeks as the rains eased and water levels receded, allowing government and disaster relief agencies to distribute emergency supplies. However, many victims said the support fell far short of the need. Jamal Khan, 40, a father of three from the flood-affected northern district of Sirajganj, said his family was struggling to get back to normal. “The government handed out some food and a charity (Caritas) also offered food and cash, but the aid was not enough,” Khan, a Muslim, told ucanews.com. “My wife, son and I have been struggling maintain the family by working as day laborers, but after flooding, there is less opportunity to find work.”

Migrant children will suffer most under new detention rule

WASHINGTON (CNS) — The chairman of the U.S. bishops’ migration committee said Aug. 23 sees “heartbreaking consequences for immigrant children” in a final rule issued by the Trump administration that allows the federal government to hold immigrant children in family detention indefinitely. The new rule was issued jointly by the Departments of Homeland Security and Health and Human Services that will end a long-standing legal agreement put in place in 1997— known as the Flores Settlement Agreement — to ensure the safety and care of children in immigration detention settings. Pope Francis has deemed immigrant children “the most vulnerable group’ among migrants,” and they will be most affected by this new rule, said Bishop Joe S. Vasquez of Austin, Texas, who is chairman of the U.S. bishops’ Committee on Migration. (This) is an attempt by the administration to circumvent existing obligations and undermine critical protections for these children,” the bishop said in a statement. “This rule will jeopardize the well-being and humane treatment of immigrant children in federal custody and will result in children suffering long-lasting consequences of being held for prolonged periods in family detention. We oppose this rule that we believe is unlawful and inhumane. Countless children will be harmed by this new rule and this is simply not acceptable,” he said.

VATICAN CITY (CNS) — A patriotic love for one’s country and culture does not mean closing off oneself to others, particularly those in need, said the Vatican foreign minister. “No one calls into question the sovereignty of a country, of a nation,” Archbishop Paul Gallagher, the Vatican secretary for relations with states, told Vatican News Aug. 22. The problem is an “exaggerated view of sovereignty” that calls for “total closure to others,” he said. “Perhaps it has a certain theoretical, pragmatic attraction, but I don’t think it is the path to take,” he said. The archbishop was in Rimini, Italy, where he was addressing a large annual meeting sponsored by the lay movement, Communion and Liberation. In the interview with Vatican News, he said that everyone is “interconnected,” and it is too difficult for one nation to guarantee by itself all of its people’s needs, for example, for peace, defense and security. “We very much value patriotism, the love of one’s country, one’s culture, the people,” he said. “In the Catholic faith — and I believe in other Christian denominations, too — there is a view of openness toward others,” which is rooted in an understanding that “there are more things we have in common than things that divide us.”

WASHINGTON (CNS) — A globetrotting warrior for life and human dignity has taken up a new gauntlet as president of the National Catholic Bioethics Center, where he will use his global expertise and Catholic bioethics education to defend against what he termed life-degrading “science fictions” that are becoming reality. Joseph Meaney, former director of international outreach and expansion for Human Life International, assumed the presidency of the National Catholic Bioethics Center, taking over from the former president of 22 years, John Haas. The new president earned his doctorate in bioethics from the Catholic University of the Sacred Heart in Rome. In an interview with Catholic News Service, Meaney said he foresees helming a difficult and fast-paced battle against an encroaching “culture of death. There are a lot of things developing at breakneck speed. We are at an unprecedented point in U.S. history. We have never seen this speed of scientific change,” Meaney said. “There are huge developments in robotics, movements to replace organs and limbs with robotic parts, artificial intelligence implants directly into the brain. These all were science fiction so recently. We are taking something you would talk about in a Hollywood film and turning it into reality.”

WASHINGTON (CNS) — The Thomistic Institute in Washington has launched “Aquinas 101,” a free online video course that instructs interested viewers in the thought of St. Thomas Aquinas. “Aquinas 101” will consist of 85 to 90 videos released over the course of the year. The series will introduce the basics of the Catholic intellectual tradition with St. Thomas Aquinas as a guide. The first three videos can now be viewed on aquinas101.com or on YouTube.com. The videos in the course each feature a Dominican friar/professor and are animated to illustrate the doctrines described. The priests featured include Fathers Dominic Legge, Thomas Joseph White, Thomas Petri, James Brent and Gregory Pine. The course proceeds through an introduction to St. Thomas, a basic description of his philosophy and an in-depth study of his masterwork: “Summa Theologiae.” “At the end of the course, the viewer can expect to have gained a basic mastery of the essentials of Aquinas and to have acquired the tools to engage many difficult issues of faith and science, reason and revelation, and beyond,” said a news release from the Thomistic Institute announcing the course. More about the institute can be found online at https://thomisticinstitute.org.

WHEELING, W.Va. (CNS) — Bishop Mark E. Brennan was welcomed Aug. 22 at the Cathedral of St. Joseph in Wheeling as the ninth bishop of the Diocese of Wheeling-Charleston, which encompasses the state of West Virginia, in a ceremony filled with song and applause. After processing into the cathedral, the bishop, who until now was an auxiliary bishop of Baltimore, listened as Msgr. Walter Erbi, charge d’affaires at the apostolic nunciature in Washington, read the papal bull of his appointment. Bishop Brennan held up the official document to the congregation “for those with good long-range vision,” he said to laughter and sustained applause. Asked by Msgr. Erbi if he accepted the responsibility for which Pope Francis chose him, the bishop said, “With faith in Jesus Christ and with the help of God, I do accept the pastoral care of the people of God of the Diocese of Wheeling-Charleston. I resolve to serve faithfully the spiritual needs of the local church.” Msgr. Erbi represented Archbishop Christophe Pierre, apostolic nuncio to the Unites States, who could not attend due to a meeting in Rome. Then Baltimore Archbishop William E. Lori, who has been apostolic administrator of Wheeling-Charleston since last September, led Bishop Brennan to the cathedra, the bishop’s chair, and handed him his new crosier, a wooden pastoral staff — taller than the bishop himself — with a large curve at the top. Archbishop Lori noted that he has known Bishop Brennan since their days in the seminary. “He is the strong, loving and wise shepherd we have been praying for.” 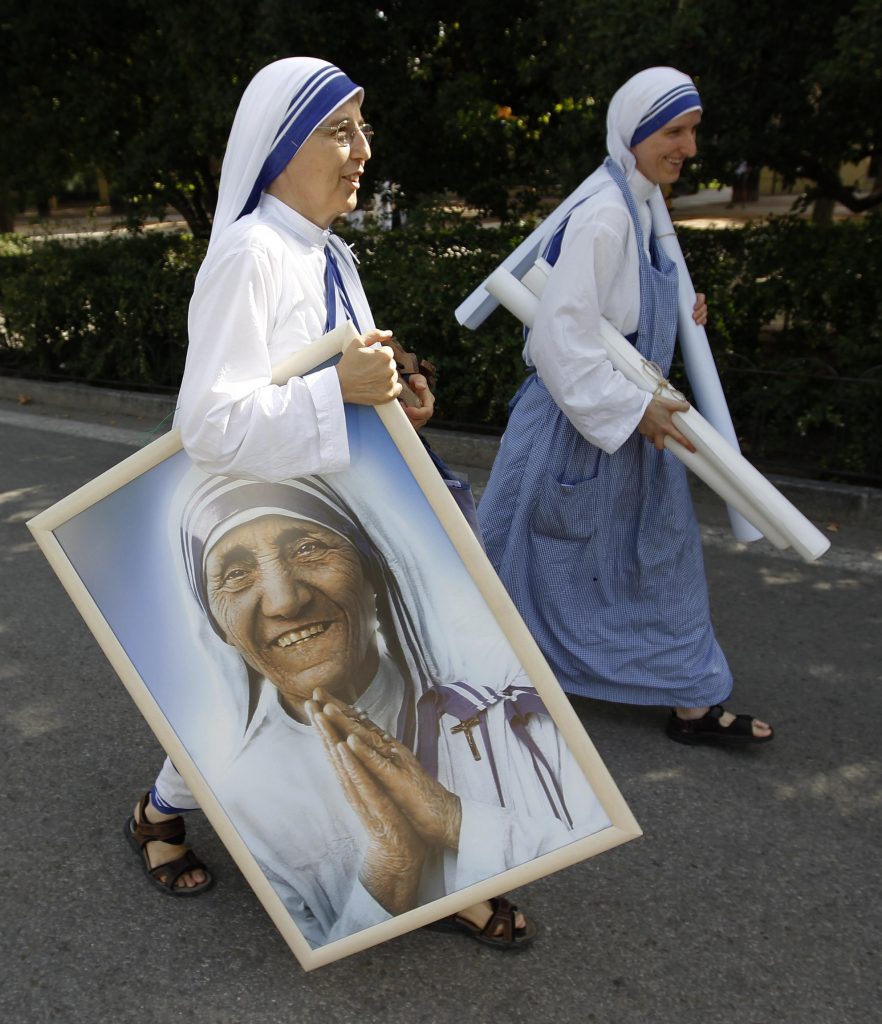 In this 2011 file photo, a member of the Missionaries of Charity carries a portrait of St. Teresa of Kolkata in Madrid’s Buen Retiro park. (CNS photo/Andrea Comas, Reuters)