WASHINGTON (CNS) — Catholic Charities USA has unveiled a $1 million award program that officials hope will lead to innovative efforts to address poverty. Called the Innovation Challenge, the program will see three member agencies receiving identical $333,333 awards for the “reduction, elimination and prevention of poverty. Innovation is the key word,” explained Steve Bogus, who is Catholic Charities USA’s vice president of social enterprise and workforce development. Dominican Sister Donna Markham, president and CEO, announced a yearlong competition Sept. 26 during the agency’s annual gathering in Albuquerque, New Mexico. She invited diocesan member agencies to submit proposals for new programs to meet peoples’ needs. The winners will be announced during the organization’s annual gathering Oct. 28-30, 2020, in Cleveland. Awards will be given to three diocesan agencies based on the size of their operation. That way, Bogus told Catholic News Service, a small agency will not be competing with an agency in a much larger budget and staff. The competition is meant to inspire Catholic Charities staffers around the country to think of new ways to address poverty, Bogus said.

Mexican state lawmakers: Abortion no longer a crime in Oaxaca

GUATEMALA CITY (CNS) — Lawmakers in the southern Mexican state of Oaxaca have approved a measure to decriminalize abortion, despite vocal Church opposition. The measure passed the Oaxaca state legislature, 24-10, amid shouts in the session from boisterous supporters and opponents. It allows for abortion in the first 12 weeks of pregnancy. Oaxaca becomes the second Mexican jurisdiction to decriminalize abortion and follows Mexico City, which approved decriminalization in 2007. The Archdiocese of Oaxaca voiced displeasure with the decision, posting on its Facebook page immediately after the measure was approved, “Only God decides who is born and who is not born.” In a statement released later that day, Archbishop Pedro Vazquez Villalobos said, “Making laws that promote the death of the unborn causes a grave moral deterioration, continues deforming our values and does not protect the defenseless nor defend the weak.” The archbishop added, “We continue praying that this situation makes us aware of what we want and what kind of society we want to shape so that, as true Christians, we continue to be defenders and promoters of human life.”

‘Christ Our Hope: In Every Season of Life’ is Respect Life Month theme

WASHINGTON (CNS) — This year’s theme for Respect Life Month, “Christ Our Hope: In Every Season of Life,” is “particularly suited for our times,” said the chairman of the U.S. bishops’ Committee on Pro-Life Activities. “Attacks against human life seem to grow ever more numerous and callous,” said Archbishop Joseph F. Naumann of Kansas City, Kansas, and he urged Catholics who feel discouraged by these attacks to “hold fast to Christ, our hope. We know that Christ has conquered sin and death. Through our Christian hope in the Resurrection, we are given the grace to persevere in faith,” he said in a Sept. 26 statement. The need to “cherish, protect and defend human life” is year-round, Archbishop Naumann noted, but he said the U.S. Catholic Church sets aside each October as Respect Life Month to bring special attention to all life issues. The first Sunday of October, Oct. 6 this year, is Respect Life Sunday. Every October, the U.S. Conference of Catholic Bishops launches a new yearlong cycle of the Respect Life Program — a nationwide effort “to help Catholics understand, value and help cultivate respect for human life.” The USCCB’s Secretariat of Pro Life Activities has prepared a packet for the 2019-20 program containing materials and resources. The materials are available online at https://www.respectlife.org/october.

VATICAN CITY (CNS) — U.S. Cardinal William J. Levada, former head of the Vatican’s doctrinal congregation and retired archbishop of San Francisco and Portland, Oregon, died Sept. 26 in Rome. He was 83. When Cardinal Joseph Ratzinger was elected Pope Benedict XVI in 2005, he named then-Archbishop Levada to replace him as head of the Congregation for the Doctrine of the Faith, the Vatican agency charged with protecting and promoting the Church’s teachings on faith and morals. It was the first time a U.S. prelate had headed the congregation, and Cardinal Levada served in that position until 2012. Before his Vatican appointment, he had served as archbishop of San Francisco since 1995; archbishop of Portland, Oregon, 1986-95, and an auxiliary bishop of Los Angeles, 1983-86. For decades, he was a frequent collaborator with the Vatican and with the future Pope Benedict. He was a doctrinal congregation staff member from 1976 to 1982 and was a bishop-member of the congregation beginning in 2000. In the 1980s, he worked with then-Cardinal Ratzinger as one of a small group of bishops appointed to write the “Catechism of the Catholic Church.” Cardinal Levada was a key figure in the Church’s efforts to eliminate priestly sexual abuse. He headed the Vatican agency that oversaw the handling of priestly sexual abuse cases; in 2002, he was a member of the U.S.-Vatican commission that made final revisions to the sex abuse norms in the United States, which laid out a strict policy on priestly sex abuse and provided for removal from ministry or laicization of priests.

WASHINGTON (CNS) — Refugee advocates are opposed to the decision announced by the Trump administration Sept. 26 that it plans to admit no more than 18,000 refugees in the next fiscal year, the lowest number since the resettlement program was created in 1980. “The U.S. must remain the beacon of hope to people who feel forgotten and abandoned by the world and maintain its status as a leader of refugee policy for all nations to follow,” said Dominican Sister Donna Markham, president and CEO of Catholic Charities USA. A Sept. 27 statement by the organization said it “strongly opposes” the administration’s plans to “historically reduce the number of refugees welcomed into the United States” and urged it to “consider the refugee resettlement program’s mission to provide protection to those in need for humanitarian reasons. The program should return to consistent refugee numbers rather than focus primarily on its use for partisan-based purposes,” the statement added. The State Department released the refugee cap proposal and the White House issued a separate order saying states and localities must approve refugee resettlement in their regions before refugees can be sent to them. A final decision on the number of refugees the U.S. will admit will be made after consultation with Congress.

WASHINGTON (CNS) — The Vatican Congregation for Catholic Education temporarily lifted a decree that had taken away the Catholic status of Brebeuf Jesuit Preparatory School in Indianapolis. The decree was issued three months ago by Indianapolis Archbishop Charles C. Thompson when the school refused to dismiss a gay employee in a same-sex marriage. Its suspension is just until the congregation makes a final decision since the Midwest province of the Society of Jesus, which administers Brebeuf, has appealed the archbishop’s decision to the Vatican congregation. “We have just learned that the Congregation for Catholic Education has decided to suspend the archbishop’s decree on an interim basis, pending its final resolution of our appeal,” Jesuit Father Bill Verbryke, Brebeuf’s president, said in a Sept. 22 letter to the school community, posted on the school’s website. He said in light of the congregation’s temporary decision, Archbishop Thompson said the school is free to resume Masses, which would include a Mass for the feast of St. Jean de Brebeuf Oct. 24. Father Verbryke stressed that the temporary suspension of the archbishop’s decree “does not mean that the matter has been resolved, or that any permanent decision has been made. It also does not mean that anyone should infer that the Congregation for Catholic Education is leaning one way or the other on any of the issues at hand. The Congregation has simply granted a temporary suspension of the archbishop’s decree until it makes a final decision,” he wrote. 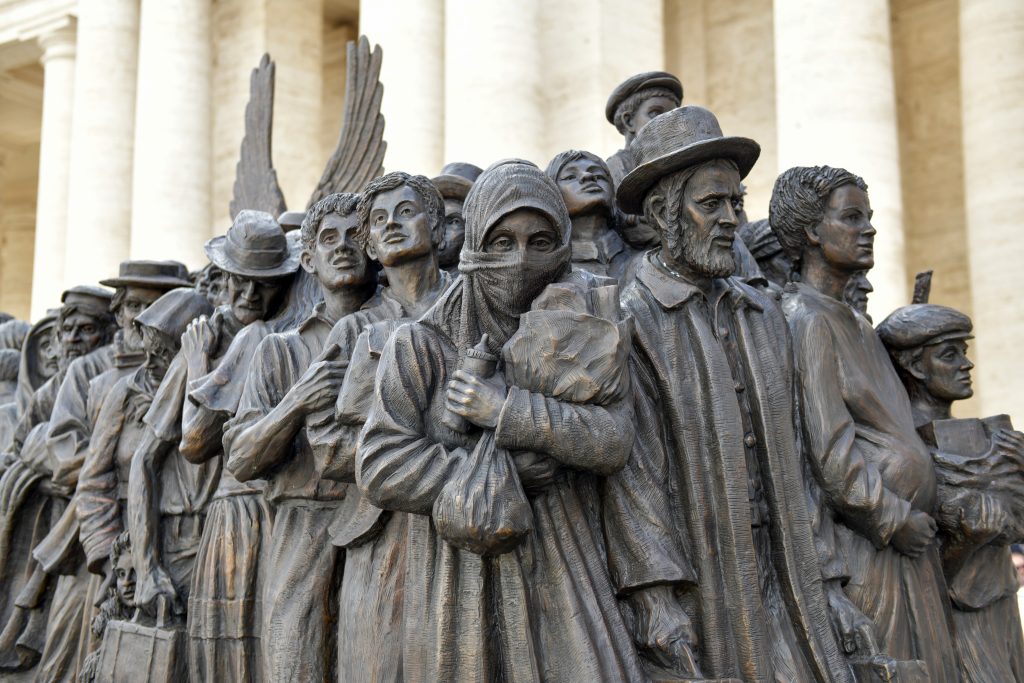 Migrants and refugees are pictured on a large bronze statue in St. Peter’s Square at the Vatican Sept. 29, 2019. Pope Francis attended the unveiling of the statue after celebrating a Mass for World Day of Migrants and Refugees. (CNS photo/Paolo Galosi, pool)