VATICAN CITY (CNS) – Saying it is committed to “respectful dialogue” with China’s communist government and to “fostering the mission of the Catholic Church and the good of the Chinese people,” Vatican officials announced a renewed agreement with China on the appointment of bishops. The “provisional agreement,” forged in 2018 and renewed in 2020, has been extended for another two years, the Vatican announced on Oct. 22. The text of the agreement has never been made public, but Vatican officials said it outlines procedures for ensuring Catholic bishops are elected by the Catholic community in China and approved by the pope before their ordinations and installations. In the past four years, only six bishops have been named and installed under the terms of the agreement. Cardinal Pietro Parolin, Vatican Secretary of State, interviewed by Vatican News on Oct. 22, noted that the achievements of the agreement also included the lifting of the excommunications or irregular status of seven bishops who had been ordained with government approval, but not the Vatican’s consent and, he said, “the first six ‘clandestine’ bishops have also succeeded in being registered and thus have had their position made official, being recognized as bishops by public institutions.” Many dioceses are still without bishops or have very elderly bishops, he said, but the process is continuing. However, Cardinal Parolin also acknowledged “there are dioceses in which, despite all efforts and good will, no fruitful dialogue exists with local authorities.”

VATICAN CITY (CNS) – As France begins a national debate on euthanasia, Pope Francis urged politicians from the country’s northern region to reject the “throwaway culture” and instead focus on providing care and relief to those nearing the end of their lives. “I dare to hope that on such essential issues the debate can be conducted in truth to accompany life to its natural end and not to get caught up in this throwaway culture that is everywhere,” the pope said on Oct. 21 as he met with mayors and other elected local, regional, and national officials making a pilgrimage sponsored by the Archdiocese of Cambrai. French President Emmanuel Macron, who is scheduled to meet with Pope Francis on Oct. 24, announced in early September the beginning of a nationwide discussion about allowing euthanasia in some cases; he called for local debates, country-wide consultations with health care workers, and discussions with political parties to reach a decision in 2023. Pope Francis began his talk to the pilgrims by noting how much the region and people of Cambrai had suffered with shuttering of coal mines, steel mills, and textile factories, and he urged the officials to pay particular attention to the region’s poor and needy. “Welcome and care” must be the guiding principles of their public policies, the pope told them.

YAOUNDÉ, Cameroon (CNS) – Catholic clergy who were abducted by separatists in Cameroon have pleaded with their bishop to secure their release in a video. “It is quite difficult, and we are only begging … that you do everything possible to get us out of here. It is a matter of do or die,” Father Cornelius Jingwa, one of the priests, said in the 45-second video. “If you look at us, you’ll see our faces are very dismal and unhappy.” The video, released on social networks on Oct. 19 and run by the Cameroonian News Agency, showed the five priests with a nun, Sister Jacinta Udeagha, seated in a forest, accompanied by three distressed lay catechists. All nine were seized on Sept. 16 when 60 attackers destroyed St. Mary’s Catholic Church in the southwestern village of Nchang, close to the Nigerian border. In the video, Father Jingwa said he had fallen ill since his abduction and pleaded with Bishop Aloysius Fondong Abangalo of Mamfe to take steps to obtain the hostages’ release. “My brothers, too, are not feeling fine at all – so please, kindly, my lord, get us out of here,” the priest said. “Do whatever it takes to listen to these boys and do what they ask of you.”

ACCRA, Ghana (CNS) – Religious leaders called for a week of fasting and prayer for the environment because of the devastation that illegal mining, or “galamsey,” is causing, including adversely affecting people’s health and the economy. “We are calling for a week of fasting and prayers to pray for change of hearts and for God’s mercy upon our nation for the destruction we have caused the environment,” said Archbishop Philip Naameh, President of the Ghana Catholic Bishops’ Conference, on Oct. 17. He spoke on behalf of the Christian ecumenical bodies, which include Christian and Muslim leaders, among others. “With immediate effect, we call on religious leaders to wear red armbands to show our deep concern for the destruction of our environment through galamsey,” he said. “For many years now, our sovereign country Ghana has been witnessing, under our very naked eyes, the saddest environmental coup d’état ever unleashed upon our nation, heralding a programmed and complete ecological disaster or destruction.” Archbishop Naameh said that in pastoral and social visits around the country, “we see, denounce, and cry over the wicked and greedy destruction of our forest resources.” He decried the cutting down of cash crops on a massive scale, degrading of the land, and polluting the rivers with mining chemicals like mercury, chlorine, and cyanide, which kill aquatic life.

Bishop in South Sudan Appeals for Food Amid Continued Atrocities

NAIROBI, Kenya (CNS) – The bishop of a diocese in South Sudan is appealing for food as his region in the county’s south has been hit by rebel atrocities. In a video message, Bishop Alex Lodiong Sakor Eyobo of Yei said the militant Sudan People’s Liberation Movement in Opposition had committed atrocities, particularly in Morobo County, within Central Equatoria state. “The people are fleeing the affected areas due to these meted out atrocities by these militant rebels,” the bishop said. He mentioned rape, murder, and the burning of food storage facilities. He stressed the fleeing people were in dire need of food. “Humanitarian organizations really need to respond to these people fast to make sure that our brothers and sisters are rescued from that condition created by our own people,” said Bishop Sakor Eyobo. The Sudan People’s Liberation Movement in Opposition is a mainly South Sudanese political party and rebel group. In 2013, it split from the Sudan People’s Liberation Movement due to political tensions between President Salva Kiir and Vice President Riek Machar, tensions that eventually led to the outbreak of civil war in 2013.

LVIV, Ukraine (CNS) – After Ukrainian women were released in a prisoner swap with Russia, the head of the Ukrainian Catholic Church said their stories “simply break the heart, make the blood run cold in your veins. This war will go down in history as one in which Russia uses sexual violence as a weapon against Ukraine,” said Archbishop Sviatoslav Shevchuk of Kyiv-Halych. On Oct. 17, more than 100 Ukrainian women were released from Russian captivity. Andriy Yermak, head of the Ukrainian Presidential Office, said it was the first female-only exchange, and he called it “especially emotional and truly special. Mothers and daughters, whose relatives were waiting for them, were held captive,” Yermak said. On Oct. 18, Archbishop Shevchuk thanked God that the women were able to return to their families. “Let us wrap these women together today with our attention, love and prayer, and warm them up with our national warmth,” he said. 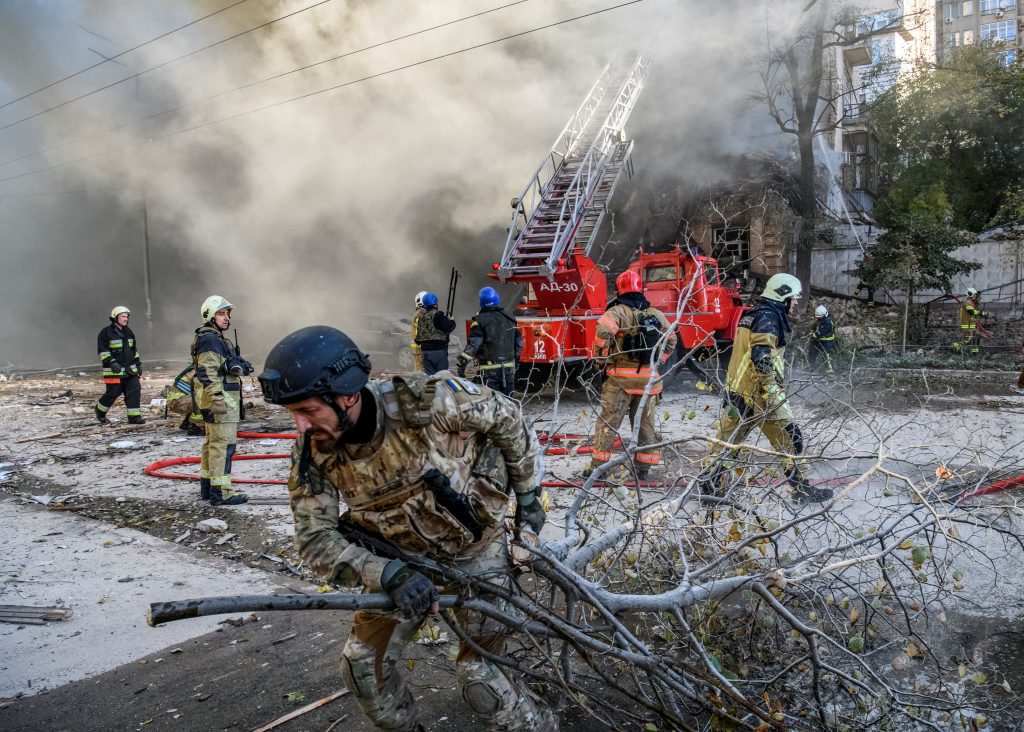