VATICAN CITY (CNS) — World leaders must commit to rooting out the evil of racism, xenophobia and racial discrimination through meaningful legislation and action, said Archbishop Paul R. Gallagher, Vatican foreign minister. Addressing a high-level U.N. meeting Sept. 21, Archbishop Gallagher also said that violence against religious groups as well as prenatal diagnostics that lead to a denial of the right to life “because of disability, sex, or other traits” must not be ignored. “Universal human rights are indivisible and interdependent and thus cannot exist in opposition. Laws and norms that seek to root out discrimination and intolerance must therefore respect the right to freedom of opinion, thought, religion and conscience,” he said. The high-level meeting marked the 20th anniversary of the Durban Declaration and Program of Action, a U.N. document that proposed concrete measures to combat racism, racial discrimination, xenophobia and related intolerance. The Vatican’s commitment to fight racism, Archbishop Gallagher said, is “rooted in the erroneous and evil claim that one human being has less dignity than another.”

VATICAN CITY (CNS) — A living faith draws strength from remembering the past while continuing to grow in love of God and service to others, Pope Francis said. The pope said he saw that kind of faith on display Sept. 12-15 as he visited Hungary and Slovakia. Reviewing the trip Sept. 22, Pope Francis told people at his weekly general audience that the roots of identity and faith must be “conserved — not like museum exhibits, not ideologized and exploited out of interests of prestige and power (or) to consolidate a closed identity” — but as reminders of what God has done and as inspiration for growing closer to God and to other people. In Hungary Sept. 12, Pope Francis celebrated the closing Mass of the International Eucharistic Congress where, he said, participants were “embraced by the cross that stood above the altar, showing the same direction indicated by the Eucharist, namely the path of humble and selfless love, of generous and respectful love toward all, of faith that purifies from worldliness and leads to what is essential.” With liturgies in the Roman and Eastern rites, ecumenical gatherings, meetings with members of the Jewish community, with Roma and with the homeless, Pope Francis said his trip was “a pilgrimage of prayer in the heart of Europe, beginning with adoration and ending with popular piety.”

Bill to codify Roe called one of most ‘extreme’ abortion bills seen in U.S.

WASHINGTON (CNS) — The Women’s Health Protection Act of 2021, introduced in the U.S. Senate and House June 8 and currently moving through various committees in both chambers, “is nothing short of child sacrifice,” said Archbishop Salvatore J. Cordileone of San Francisco. The “misnamed” measure, he said, “shows to what radical extremes the supposedly ‘pro-choice’ advocates in our country will go to protect what they hold most sacred: the right to kill innocent human beings in the womb,” he said in a Sept. 21 statement. Denver Archbishop Samuel J. Aquila also weighed in with a statement a day later, echoing the San Francisco prelate in urging the bill be defeated. “Today, the abortion industry and its supporters are pushing one of the most extreme national abortion bills this country has ever seen, and doing it under the lie that abortion is a form of health care that must be protected and promoted,” the Denver prelate said. If Congress passes the bill and it becomes law, it would invalidate nearly all existing state limitations on abortion. The House and Senate bills — H.R. 3755 and S. 1975 — would codify the U.S. Supreme Court’s 1973 Roe v. Wade decision in law legalizing abortion nationwide. It would establish the legal right to abortion in all 50 states under federal law.

VATICAN CITY (CNS) — The establishment of an Ecclesial Conference of the Amazon that involves both the laity and the clergy is a sign of a Church that listens to God through the voice of his people, Peruvian Cardinal Pedro Barreto Jimeno of Huancayo said. Participants at the 2019 Synod of Bishops for the Amazon had recommended forming “an episcopal organism that promotes synodality among the Church of the Pan-Amazon region.” Instead of creating a regional bishops’ conference, however, the bishops in 2020 formed the “ecclesial” conference to include representatives of all the Church’s membership. The Amazon synod, as well as the upcoming synod on “synodality,” are a manifestation of Pope Francis’ desire of “going from the periphery to the center as an evangelizing criterion,” Cardinal Barreto told Catholic News Service Sept. 22. “The Church is moving from the periphery to the center,” the cardinal said. “The message is clear, and this is not something invented by Pope Francis; this is in the documents of the Second Vatican Council.” The Peruvian cardinal, who serves as president of the Pan-Amazonian Church Network, known as REPAM, met with Pope Francis at the Vatican Sept. 20 to update him on the work of the organization, which also was involved in establishing the Ecclesial Conference of the Amazon.

LEWISTON, Maine (CNS) — Bishop Robert P. Deeley of Portland, Maine, told the congregation at the diocese’s annual Blue Mass Sept. 19 that “a good thing” brought them all together that morning. They gathered to thank first responders, pray for their safety and remember the fallen, including those who lost their lives during 9/11. “We are here to perform an act of duty. We are here to remember,” the bishop said. The Blue Mass — so named for the blue uniforms that firefighters, law enforcement and other first responders wear — began with the sound of marching heels walking down the main aisle of the Basilica of Sts. Peter and Paul in Lewiston. Visible on the street next to the basilica were ladder trucks from the Lisbon and Lewiston Fire Departments displaying a massive American flag high in the air as a multijurisdictional honor guard comprised of members of four different public safety departments solemnly posted the colors in front of the sanctuary. An assembly of hundreds stood in silence, with the pews full of either first responders or those wishing to thank them. Moments later, Bishop Deeley, priests and deacons processed in, starting the 2021 Blue Mass, a tradition that dates to 1934 in the U.S. Catholic Church. The events of 9/11 prompted the Portland diocese to institute the special Mass locally.

Catholics should debate issues, not debase each other, cardinal says

ROME (CNS) ­— Honest and open debate about different points of view in the Catholic Church are fundamental, but Catholics should not be demonizing the individuals with those views, Cardinal George Pell said. Asked about the different polarized positions among Catholics that can be found online, he said that many of the issues being discussed are “very important, and I don’t think there can be any compromise on the fundamental issues of what is the apostolic tradition.” The Church’s stance on issues should be clearly explained, but there is “a hierarchy of truths, not everything is equally important,” which means Catholics “should not be disagreeing violently over too much at all but certainly not over matters which are of less importance,” he said in an interview in Rome streamed live Sept. 23 and uploaded the next day by the Pontifical University of the Holy Cross.

As Catholics try to choose among many sources and offerings online, what they should be looking for and contributing to “is regular courtesy, a regular commitment to the truth, to dialogue, debating, arguing about the issues” themselves and not attacking the people who hold a different point of view, said the cardinal, who is the former prefect of the Vatican Secretariat for the Economy and retired archbishop of Sydney. The interview was part of the university’s biennial “The Church Up Close” seminar offered to journalists who report on the Catholic Church. This year’s seminar was held online and focused on “Covering Catholicism in the Age of Francis.” 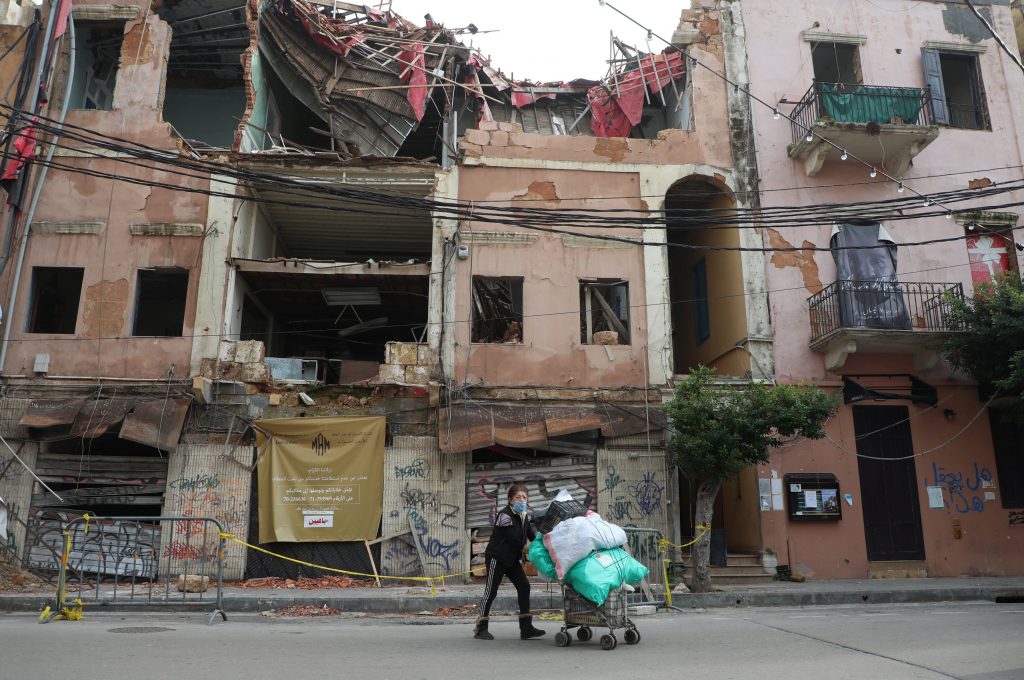 A woman wearing a protective masks pushes a cart past damaged buildings in Beirut Jan. 26, 2021, during the COVID-19 pandemic. According to the United Nations, 78% of Lebanese now live below the poverty line. (CNS photo/Mohamed Azakir, Reuters)