QUEBEC CITY (CNS) — Many experts fear the Quebec government’s legislation on education will further dismiss religion and spirituality from the province’s schools. Among the changes announced in a bill presented Oct. 1, the government plans to abolish the Ministry of Education’s religious affairs advisory committee and to remove all references to spirituality from the Education Act. The legislation, Bill 40, coincides with ongoing debates about the place of religious beliefs in schools, especially after the adoption in June of a secularism bill that prohibits teachers from wearing religious symbols during work hours. “At a time when Bill 21 on secularism in the school system is being applied, when the future of the ethics and religious culture course is being questioned, the government is abolishing the committee that is able to give notices on these issues,” said Jean-Philippe Perreault, a professor at Laval University’s Faculty of Theology and Religious Studies. A specialist in ethics and religious culture, Perreault is a member of the Religious Affairs Committee. In 2000, in the wake of the deconfessionalization of the Quebec school system, the two former Catholic and Protestant committees of the Ministry of Education were replaced by the Religious Affairs Committee, whose role became only advisory.

Inadequate formation a factor in lack of vocations, bishops say

VATICAN CITY (CNS) — Existing formation programs are not preparing priests and other pastoral workers to be leaders in a Church with an Amazonian and indigenous face, according to bishops participating in the synod for the Amazon. “It’s not the same to evangelize in the city as in the Amazon,” Bishop Rafael Cob Garcia of Puyo, Ecuador, told journalists at an Oct. 12 press briefing. “The needs are different.” Formation must be adapted to meet those needs, he said. Synod participants repeatedly have mentioned the lack of sufficient priests to celebrate the Eucharist and other sacraments in the thousands of communities scattered throughout huge Church jurisdictions in Amazonia. Some bishops have pointed to the Church’s mandatory celibacy requirement as an obstacle to indigenous vocations. In many indigenous cultures, a young man is not considered an adult and a full member of the community until he has a family. Another obstacle is academic, because quality education is lacking in rural villages, Bishop Cob said. When young men from villages go to a seminary in the city, they often find themselves behind their urban classmates academically and drop out. When a young man goes from an indigenous village to an urban seminary, he also is uprooted from his culture, Franciscan Father Joao Messias Sousa, who ministers among the Munduruku people in Brazil’s Tapajos River basin, told Catholic News Service.

Celibacy is a gift, not an obstacle, indigenous priest says

VATICAN CITY (CNS) — While indigenous cultures may have difficulty accepting the concept of celibacy, indigenous candidates for the priesthood are more than capable of understanding that it is a gift from God, said an indigenous priest from Brazil. “Celibacy is not something that is born in a human person; it is something that is established some time during one’s life,” Salesian Father Justino Sarmento Rezende told journalists Oct. 17 during a press briefing on the Synod of Bishops for the Amazon. “People from any culture that exists in the world can live celibate lives from the moment that he or she freely — not forcibly — says, ‘I want to live that lifestyle,’” he said. Father Rezende was responding to a question regarding comments made in the synod’s first week by retired Bishop Erwin Krautler of Xingu, Brazil, who said that when it comes to ordaining married “viri probati,” or men of proven virtue, “there is no other option. The indigenous people don’t understand celibacy; they say that very openly and I see it,” Bishop Krautler said Oct. 8. “When I go to an indigenous village, the first thing they ask is, ‘Where is your wife?’ And I tell them, ‘I don’t have one.’ Then they look at me with pity.”

ST. AUGUSTINE, Fla. (CNS) — Bishop Felipe J. Estevez of St. Augustine made a surprise announcement during Mass Oct. 11 that the U.S. Conference of Catholic Bishops has elevated the Shrine of Our Lady of La Leche to national shrine status. For many years, the shrine at Mission Nombre de Dios in St. Augustine has been a renowned landmark for pilgrims who visit from all over the world. It is America’s oldest Marian shrine. Among the more than 200 people who attended the Mass on the feast of Our Lady of La Leche were benefactors, members of the recently reinstated Confraternity of Our Lady of La Leche, Knights and Dames of Malta, and many others who cherish the devotion to the Virgin Mother nursing the infant Jesus. In his homily, Bishop Estevez spoke about how Mary exemplifies what it means to have a relationship with God. “Mary recognizes the living God who closes the door to the mighty of this world and raises up the little ones, the poor in spirit, who are blessed by God,” he said. “She praises God in his great mercy toward those who obey him and open their hearts to him.” According to the USCCB, the term “shrine” signifies a church or other sacred place to which the faithful make pilgrimages for a particular pious reason with the approval of the local ordinary. The distinguishing mark of a shrine is that it is a place to which the faithful make pilgrimages.

WASHINGTON (CNS) — “Nones,” those who profess no religious affiliation, are now the largest subgroup in American society, their numbers having grown in the past decade while the percentage of Catholics in the United States slipped over the past 10 years. In a Pew Research Center “religious landscape” report issued Oct. 17, nones have jumped from 17% of the adult population in 2009 to 26% in 2019. Catholics, meanwhile, have slipped from 23% in 2009 to 20% today. Meanwhile, the Catholic Church can no longer claim a majority of the nation’s Hispanic population. The figure dropped from 57% in 2009 to 47% in 2019, although the latter number still represents a plurality. The percentage of Hispanics who say they are unaffiliated climbed from 15% in 2009 to 23% in 2019, and those who say they are Protestant went up 1 percentage point from 23% to 24%. Amid a number of setbacks for religionists outlined in the study, it did say 62% of those who profess Christianity say they attend services at the same rate they did in 2009 — at least twice a month. Overall, 65% of respondents described themselves as Christians. However, the study’s numbers also suggest that the overall number of Christians has dropped in the United States over the past decade, from 178 million in 2009 to about 167 million today, while the number of Americans who are religiously unaffiliated grew by close to 30 million. 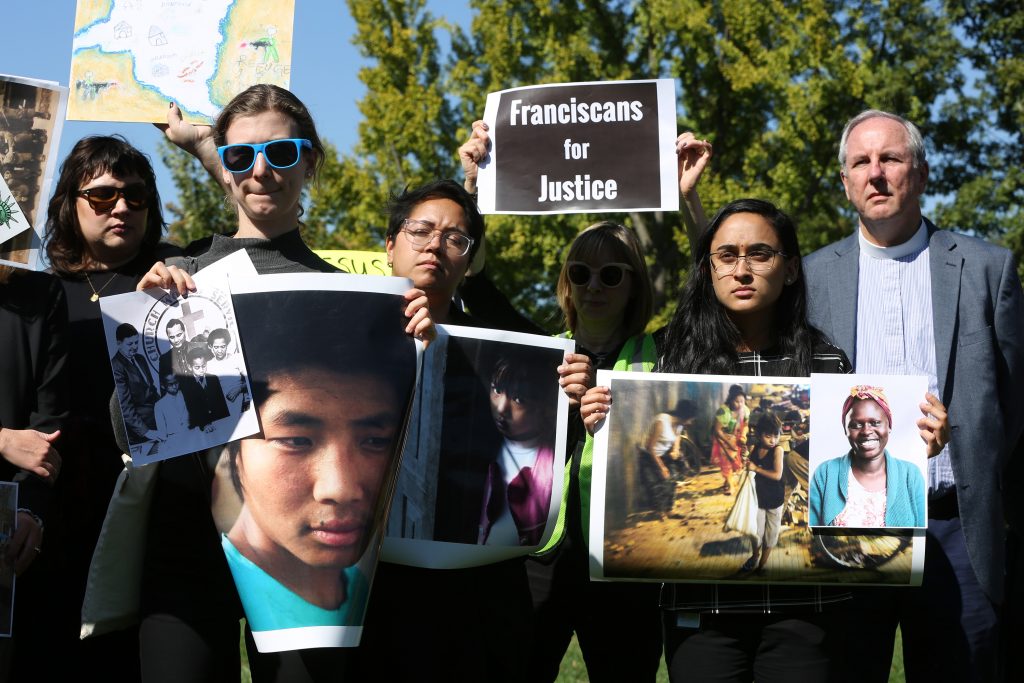 Activists hold signs during a protest Oct. 15, 2019, outside the U.S. Capitol in Washington against the Trump administration’s cuts in the number of refugees to be admitted under the U.S. resettlement program. (CNS photo/Bob Roller)