WASHINGTON, D.C. (CNS) – In oral arguments on Oct. 11, the Supreme Court considered the case of Texas inmate Rodney Reed, who has been on death row for more than 25 years and has gained the attention of Catholic leaders and celebrities for his claims of innocence. In this case, the justices were specifically looking at a procedural question: whether Reed had been too late in filing his civil rights lawsuit against state officials who had rejected his requests for DNA testing of crime-scene evidence he hoped would clear him. Reed, who is Black, was convicted by an all-white jury of the 1996 murder of a white woman, Stacey Stites. He has consistently maintained his innocence, explaining that he was in a secret relationship with Stites. His attorneys and activists have said that evidence unearthed since Reed’s trial points to Stites’ fiancé as the murderer. So far, the state has denied Reed’s request for DNA testing, saying that evidence from the crime scene should not be tested because the items were improperly stored and could be contaminated. A Texas district court agreed in 2014 and three years later, the state’s Criminal Court of Appeals affirmed that decision. Reed took his case to U.S. District Court in Texas and argued that the Texas law about post-conviction DNA testing violated his right to due process. The state in turn argued that his claims have a statute of limitations of two years that began in 2014 when the state district court made its initial decision not to test the DNA. A decision in Reed v. Goertz is expected next year.

Nuncio Urges More Accountability by Nations for ‘Crimes Against Humanity’

UNITED NATIONS (CNS) – The Vatican’s permanent observer to the United Nations told a committee of the world body that “civilian populations continue to be victims of widespread and systematic attacks.” Where there is “credible evidence” of such attacks, “there must be accountability,” he said. “Crimes against humanity are among the most serious crimes under international law and their prevention and punishment concerns the entire international community,” Archbishop Gabriele Caccia said on Oct. 11. He made the remarks in a statement he delivered to the U.N. General Assembly’s Sixth Committee during its plenary meeting on crimes against humanity. Attacks against civilian populations “are a reality of our times,” but they are “clearly prohibited under customary international law,” the archbishop said, adding that “the perpetrators of these heinous crimes continue to enjoy impunity. Although crimes against humanity are conceptually distinct from war crimes, we must acknowledge that civilians are particularly at risk wherever war rages,” he said, deploring “massacres, torture, rape, and the deliberate, indiscriminate targeting of civilian areas and humanitarian corridors.”

WASHINGTON, D.C. (CNS) – Authorities in Central America feared the number of dead would increase after the weather system known as Julia left much of the region buried in mud or covered in floods in early October. Five members of the armed forces of El Salvador are part of 28 reported fatalities related to Julia as of early Oct. 11, but the death toll is expected to rise. The country’s secretary of environment said late on Oct. 10 that El Salvador had received the equivalent of about 15 percent of its annual rainfall in one day. Catholic churches there opened their doors to those seeking shelter from the storm. Nicaragua, where Julia made landfall as a Category 1 hurricane on Oct. 9, reported one death, though many doubt the government’s account. The online news site Divergentes said reports from social media document at least two deaths. Authorities in El Salvador, Guatemala, and Mexico, however, reported widespread mudslides, flash floods, overflowed rivers, and thousands in shelters awaiting the system to dissipate as it travels north. Guatemala reported destroyed homes as well as roads and bridges washed away by Julia as authorities scrambled to look for people trapped under fallen trees and structures. Five soldiers in El Salvador, who had been monitoring a community for criminal activity, died when a wall from a house collapsed and buried them, one of the national newspapers reported.

Ian is Affecting Jobs, Housing for Many in Florida, Not Just Coastal Area

MIAMI (CNS) – With the full picture of the widespread fallout and damages Hurricane Ian brought to southwest Florida still coming into focus, the Miami region looks on with a collective sigh of relief: What if that had hit here? From Naples, just two hours west of Fort Lauderdale across Interstate 75, up throughout the greater Fort Myers, Port Charlotte, and Sarasota region, many residents and parish communities are facing a challenging close to 2022 and with the holiday season just around the corner. The post-Hurricane Ian landscape is expected to trigger housing, employment, and other cost-of-living complications for the entire state and in particular on the Gulf Coast. “We saw wind damage and heard stories of those who stayed for the hurricane and the trauma they went through but some areas we have been to saw significant flood damages, the waters had subsided, but the needs are going to be there,” said Peter Routsis-Arroyo, CEO of Catholic Charities of the Archdiocese of Miami. He served as CEO of Catholic Charities of the Diocese of Venice before moving to Miami. Routsis-Arroyo’s remarks followed a second tour he took of the area following Hurricane Ian. He connected with his Catholic Charities counterparts in the Venice Diocese and offered moral support during stops at churches and drive-up emergency distribution sites in Fort Myers, Arcadia, Bonita Springs, and more.

WARSAW, Poland (CNS) – Christian dissidents in Belarus accused officials of intimidation after one of the country’s best-known Catholic churches was ordered to close following a suspicious fire. Belarus’ Emergencies Commission said it was terminating the parish’s permit to use the Church of Sts. Simon and Helena, popularly dubbed the Red Church, following the Sept. 26 fire, pending repairs and safety checks. The commission ordered the removal of all religious objects by Oct. 12. Archbishop Iosif Staneuski of Minsk-Mohilev urged the return of the church and its rectory, noting, “Many residents of our capital are greatly concerned about having no opportunity to pray or simply visit this church, while Minsk itself has been, in a certain sense, orphaned.” In an Oct. 13 pastoral letter, Archbishop Staneuski encouraged Catholics “to pray for restoration of parish activities as soon as possible.” The opposition-linked Christian Vision organization said an “immediate public investigation” should be launched into the fire, which was blamed officially on faulty wiring. The organization said Catholic representatives should also be allowed access to assess the church’s current condition. 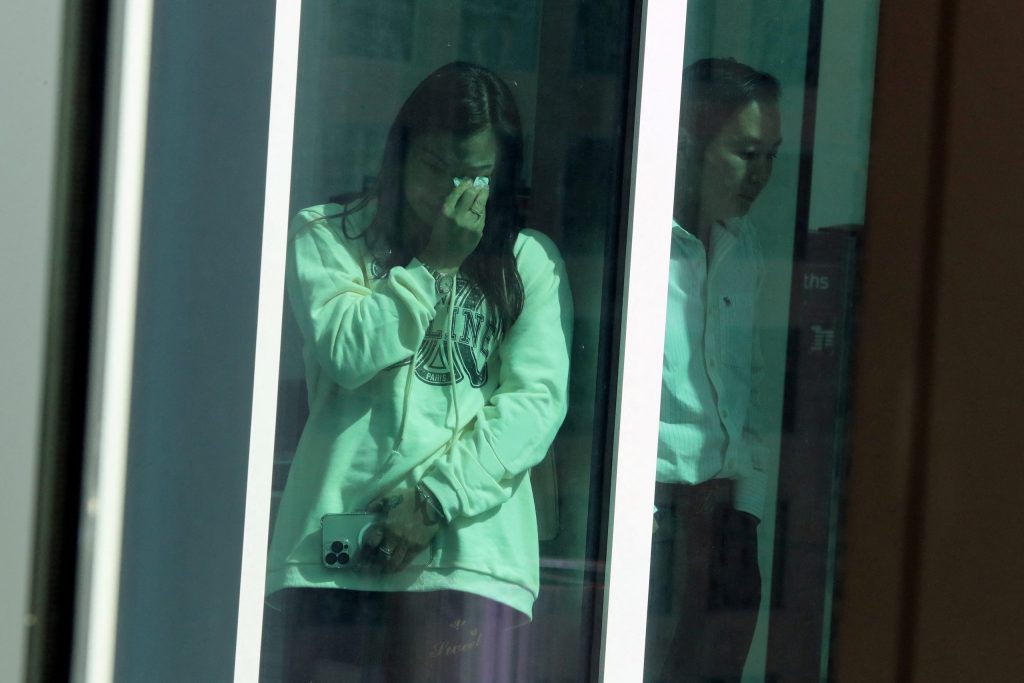 Hui Wang wipes away a tear at the Broward County Courthouse in Fort Lauderdale, Fla., Oct. 13, 2022, after a jury rejected a death sentence for Nikolas Cruz, the Marjory Stoneman Douglas High School shooter. Cruz killed Wang’s son Peter, along with 16 other people, Feb. 14, 2018, at the high school in Parkland, Fla. The jury recommended that he be sentenced to life without parole. Cruz, now 24, pleaded guilty last year to 17 charges of premeditated murder and 17 counts of attempted murder. (CNS photo/Amy Beth Bennett, South Florida Sun Sentinel, Pool via Reuters)