NASHVILLE, Tenn. (CNS) — The people who help refugees from around the world resettle in the Nashville area and across Tennessee are waiting to see if the Trump administration’s decision to reduce the number of refugees to be admitted to the country to 18,000 in the next fiscal year, the lowest number since the resettlement program was created in 1980, will stand. “The agencies are waiting and crossing their fingers, and in the meantime continue doing what they do. And they do it well,” said Holly Johnson, director of the Tennessee Office for Refugees, which oversees the resettlement program in the state. The U.S. State Department released the Trump administration’s refugee cap proposal Sept. 26 and the White House issued a separate order saying states and localities must approve refugee resettlement in their regions before refugees can be sent to them. A final decision on the number of refugees the U.S. will admit will be made after consultation with Congress. A moratorium on admitting refugees has been put in place until Oct. 22, according to Johnson. “The resettlement programs we have in Tennessee are exceptional,” she told the Tennessee Register, newspaper of the Nashville Diocese. “They are strong programs that serve a lot of people and serve them really well.” Catholic Charities of Tennessee’s Refugee and Immigration Services office is one of five resettlement agencies operating in the state and one of two in the Nashville area.

WASHINGTON (CNS) — The Little Sisters of the Poor filed a petition with the Supreme Court Oct. 1 asking the court to once again protect them from the contraceptive mandate of the Affordable Care Act. This has a familiar ring because in 2016 the Supreme Court granted the sisters a religious exemption from the government’s mandate requiring them to include coverage of contraceptives in their employee health plans or pay hefty fines. Then, one year later, they were given further protection by an executive order issued by President Donald Trump requiring the U.S. Department of Health and Human Services to write a comprehensive exemption to benefit the Little Sisters and other religious ministries from the contraceptive mandate. HHS provided this exemption in 2018 but several states challenged it, including California, Pennsylvania and New Jersey, saying HHS didn’t have the power to give this exemption. The states of Pennsylvania and New Jersey were able to obtain a nationwide injunction against the rules protecting religious objectors from the contraceptive mandate and that injunction was then upheld by the 3rd U.S. Circuit Court of Appeals, based in Philadelphia. The Little Sisters are appealing the 3rd Circuit’s ruling to the Supreme Court. “It is time for the Supreme Court to finally put this issue to rest,” said Mark Rienzi, president of Becket, a nonprofit religious liberty law firm that represents the sisters.

WASHINGTON (CNS) — The Catholic Church’s opposition to the death penalty stems from its view on the sacredness of human life and the value of mercy, said U.S. bishops in a roundtable discussion about capital punishment Oct. 10. The discussion, which was livestreamed by Catholic News Service, took place on the World Day Against the Death Penalty and highlighted not only the consistency of church teaching against capital punishment but also what Catholics could do to learn more about what the Catholic Church has to say on this issue. The panelists were Archbishops Paul S. Coakley of Oklahoma City and Wilton D. Gregory of Washington and Bishop Frank J. Dewane of Venice, Florida. Bishop Dewane is chairman of the U.S. Conference of Catholic Bishops’ Committee on Domestic Justice and Human Development and Archbishop Coakley is its chairman-elect. “The death penalty is wrong, I believe, in many different ways,” but particularly because it is “coarsening society,” said Archbishop Coakley, who stressed that capital punishment is “not a way forward” and instead is compounding the violence already present in this country. When the bishops were asked how opposition to the death penalty can be seen as a pro-life issue, Archbishop Gregory said: “It makes us violent to do violence against another human being” whether that person is waiting to be born, has reached the end of life or has committed a serious crime. They all “belong to God’s creation,” he said.

LOUISVILLE, Ky. (CNS) — St. William Church in Louisville reaffirmed its status as a sanctuary parish at a news conference on the steps of the church Oct. 8. Leaders of the parish, including parish administrator Sharan Benton, issued a public statement declaring its “long-standing commitment as a sanctuary parish.” While the parish has no plans to house migrants or immigrants, as it did for Central Americans in the 1980s, it will continue to be a voice for those fleeing violence and persecution, its leaders said. “St. William strives to embody the central principle of Catholic social teaching, which is to uphold the dignity of human persons,” said Dawn Dones, pastoral associate at St. William. In the 1980s, St. William and a number of other area churches housed Central American refugees who were fleeing oppressive governments in their countries. “In 2019, our commitment to sanctuary looks different. We are no longer equipped to house persons in the building adjacent to the church which is now a youth retreat center. “Our sanctuary declaration is instead a public rejection of the brutal and racist policies of the present administration, and a commitment to support the leadership of immigrant-led groups who work diligently to establish justice for all,” Dones said.

Journalist talks about reconciling faith and career of covering executions

HOUSTON (CNS) — Michael Graczyk, a parishioner at a Catholic church in Montgomery County, Texas, has personally witnessed more than 400 executions of Texas inmates in death penalty cases in his career as a journalist. An Associated Press reporter since 1983, Graczyk retired last year and still freelances for AP, continuing to witness executions, including nine scheduled through the end of this year. “When you walk into the death chamber, you check your emotions at the door. I usually check my emotions at the prison gate,” he said. “I’ve gotten to know many of the inmates through interviews. I also have sentiments for the families of the victims, who have to wait 10 or 20 years for the punishment to be carried out.” Since Catholic teaching is pro-life, from conception to natural death, Graczyk reconciles the two parts of himself with a Scripture passage. “I look to the biblical passage ‘render unto Caesar what is Caesar’s.’ Since this is the government doing these, I can remain faithful to the teachings of the Church,” Graczyk told the Texas Catholic Herald, newspaper of the Archdiocese of Galveston-Houston. “The Catholic Church many times has been alone in its protection of life from conception to natural death. Liberals opposed to capital punishment are often times in favor of abortion. Conservatives are against abortion, but then favor the death penalty,” he said.

WASHINGTON (CNS) — On the second day of the Supreme Court’s new term, a divided court Oct. 8 heard oral arguments from three cases concerning protections for gay, lesbian and transgender employees under Title VII of the Civil Rights Acts. At the end of the two hours, for two consolidated cases about fired gay employees and a separate case concerning a fired transgender worker, it was not clear how the court would lean, absent the previous swing vote of now-retired Justice Anthony Kennedy. But questions and comments by Justice Neil Gorsuch seemed to bridge the divide with remarks in support of the employees but also a concern about the potential of “massive social upheaval” if the court ruled in favor of these employee protections and wondered if it might be something Congress should instead address. Gorsuch commented that what the court had to determine was a “really close” case on the law, but Solicitor General Noel Francisco, arguing for the Trump administration on the side of the employers, disagreed. “I don’t think it’s that close. Sex and gender identity, like sex and sexual orientation, are different traits,” he said, but then he also agreed in part with Gorsuch saying it is “an issue better left to Congress.” 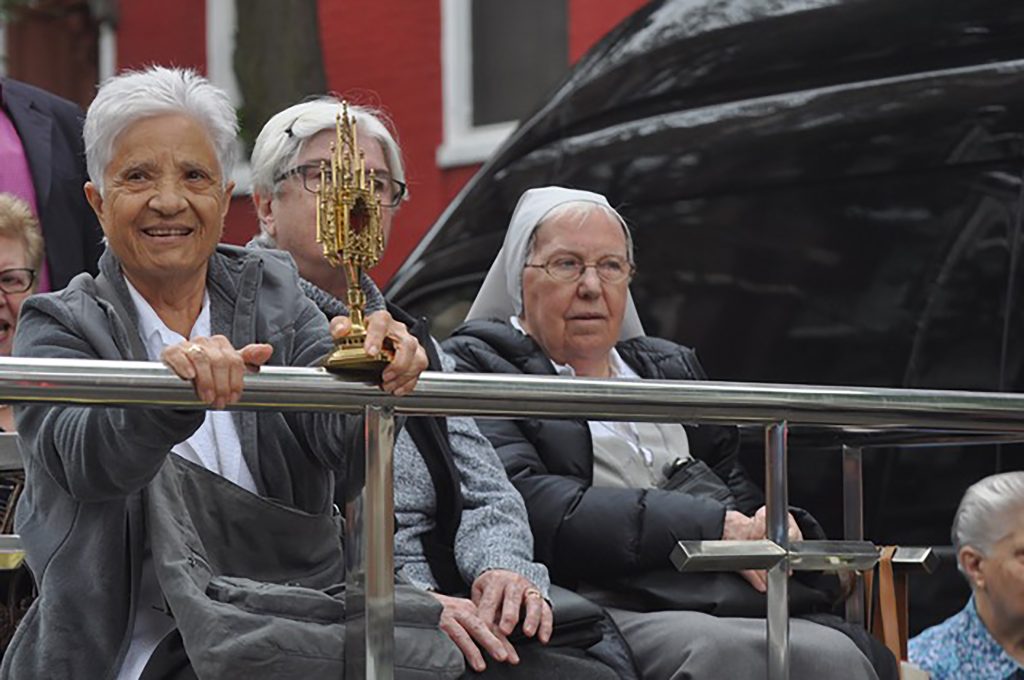 Sister Maria Loretta Caeti holds a relic of St. Frances Xavier Cabrini, who is the patroness of immigrants and once lived in Brooklyn, N.Y., during an Oct. 6, 2019, procession in Brooklyn. She was one of 14 sisters from the Missionary Sisters of the Sacred Heart of Jesus, Mother Cabrini’s order, who joined a crowd of over 1,000 rallying in support of the saint getting a statue in Brooklyn as part of the She Built NYC project. (CNS photo/Ed Wilkson, The Tablet)