WASHINGTON (CNS) — The COVID-19 pandemic, abortion and the Supreme Court, and race were among the top issues debated by Sen. Kamala Harris, the Democratic vice presidential nominee, and Vice President Mike Pence Oct. 7 at Kingsbury Hall on the campus of the University of Utah in Salt Lake City. “I am pro-life. I don’t apologize for it,” Vice President Mike Pence said, adding that he and President Donald Trump would like to see Roe v. Wade overturned. “I will always fight for a woman’s right to make a decision over her own body. It should be her decision, not that of Donald Trump or Mike Pence,” said Harris. Pence said he does not know how Trump’s nominee to the high court, Judge Amy Coney Barrett, would vote on overturning Roe if she is confirmed and if such a case would ever reach the court. He does hope Barrett, a Catholic, gets a fair confirmation hearing and is not subjected to “the kinds of attacks on her Christian faith that we saw before,” referring to the 2017 hearing for her current seat on the U.S. Court of Appeals for the 7th Circuit. At that time, Sen. Dianne Feinstein, D-California, told Barrett: “The dogma lives loudly within you, and that’s a concern.” Barrett stated her Catholic beliefs “would not bear in the discharge of my duties as a judge.”

PARIS (CNS) — The French bishops’ conference has urged Catholics to join mass protests against a government-backed bioethics bill that would liberalize abortion and embryo research and allow in vitro fertilization for lesbians and single mothers. “Pressure is mounting on the National Assembly to further extend abortion terms under the guise of women’s rights and equality and to reduce filiation to a simple act of will by those wishing to become parents — a child is no longer received, but sought, produced and chosen,” said the conference’s 10-member Permanent Council. “We invite all citizens, especially Catholics, to inform themselves about these matters and make their reservations and opposition known. Our society must not let itself be surreptitiously drawn along a dangerous path for humanity’s future,” it said. The message was published Oct. 6 ahead of a nationwide weekend of demonstrations against the draft “Law Concerning Bioethics,” set to be cleared this fall for final enactment. It said France’s Catholic bishops had long voiced concerns about the measure, which is widely expected to spur similar legislation in other countries, and counted on legislators to “take the subject seriously.”

ARLINGTON, Va. (CNS) — It began, as many good things do, with a trip to Michaels. Alison Rizzuto had been given several religious medals since she came into the Catholic Church a few years ago and she wanted a way to wear them. “I wanted something kind of funky, something modern, and I couldn’t find it,” she said. “So, I thought, ‘Oh, I’ll just make it.’” She put her daughter Charlotte on the back of her bike, and they rode to the nearby craft store. What started as a hobby has become Humble Mission Beads, a shop on the website Etsy — etsy.com/shop/HumbleMissionBeads — and it’s where Rizzuto has sold more than 1,000 pieces of faith-inspired jewelry and other products. The platform and the profits support her passion of helping women who have experienced a miscarriage. Rizzuto’s jewelry collection ranges from chunky, 10-bead rosary bracelets to delicate silver and gold necklaces, all featuring a dangling religious medal. The medal often sets the tone for the piece. The Our Lady of the Snows bracelet is made with pearls and white stones; the St. Francis of Assisi bracelet has wooden beads; and a Holy Spirit bracelet has beads meant to be dipped in essential oils so the fragrance can linger for hours. All the Humble Mission items have one thing in common: “God gives me a story for every piece of jewelry,” said Rizzuto. “The idea is a gift. It’s definitely inspiration that I get.”

ALBANY, N.Y. (CNS) — New York Gov. Andrew Cuomo’s order closing all schools in “hot zones” where cases of COVID-19 seem to be increasing is “a broad-brush approach that penalizes all schools, children and families needlessly,” said the New York State Catholic Conference. “We strongly urge that any action taken addresses actual problem schools where there is a sustained high rate of infection,” the conference said in an Oct. 5 statement issued on behalf of the New York archdiocese and the Brooklyn diocese. “The Catholic schools throughout our state and, particular in the densely populated New York City metropolitan area, have rightly been held up as a model for safety in these uncertain times,” the statement said. “Our Catholic schools opened for full-time, in-person learning weeks before the New York City public schools and have had no significant COVID-19 outbreaks to date.” Based in Albany, the state capital, the conference is the public policy arm of New York state’s Catholic bishops. Reporting on Cuomo’s Oct. 5 news conference at the Capitol, where he announced the closures, WXXI News said the governor has targeted certain ZIP codes.

WASHINGTON (CNS) — In his new encyclical, “Fratelli Tutti, on Fraternity and Social Friendship,” Pope Francis reminds the faithful that “God’s plan for humanity has implications for every aspect of our lives,” said the president of the U.S. Conference of Catholic Bishops. These aspects range “from how we treat one another in our personal relationships, to how we organize and operate our societies and economies,” said Archbishop José H. Gomez of Los Angeles in a statement Oct. 4, the day the encyclical was released by the Vatican. He called the pope’s teaching “profound and beautiful,” and said that “like ‘Laudato Si’’ before it, ‘Fratelli Tutti’ is an important contribution to the Church’s rich tradition of social doctrine. In analyzing conditions in the world today, the Holy Father provides us with a powerful and urgent vision for the moral renewal of politics and political and economic institutions from the local level to the global level, calling us to build a common future that truly serves the good of the human person,” Archbishop Gomez said. “For the Church, the pope is challenging us to overcome the individualism in our culture and to serve our neighbors in love,” he said, “seeing Jesus Christ in every person, and seeking a society of justice and mercy, compassion and mutual concern.”

WASHINGTON (CNS) — The U.S. Supreme Court is temporarily allowing drugs used to medically induce abortions to be mailed or delivered without requiring the recipient to make a doctor’s visit during the coronavirus pandemic. In an unsigned order Oct. 8, the nation’s high court rejected an emergency appeal from the Trump administration to reinstate a U.S. Food and Drug Administration rule requiring in-person visits to a hospital or clinic to pick up these pills. The requirements were suspended by a federal district court judge this summer due to the pandemic. The high court ordered that the federal judge in Maryland who made the ruling on the drug’s distribution to “promptly consider” within 40 days whether this ruling should be withdrawn or amended. The FDA, in August, had asked the Supreme Court to block the district court’s order while it appealed it. The drug in question, Mifeprex, is the brand name for mifepristone, also called RU-486, which is used to end pregnancies during the first 10 weeks. FDA regulations have required patients to receive the drug in person after signing a form acknowledging risks associated with it. Catholic Church leaders have been vocal in their opposition to this drug since it was given FDA approval in 2000 and in 2016 when the FDA relaxed rules for its use, saying it could be administered with fewer visits to a doctor.

CLEVELAND (CNS) — The president of Catholic Charities USA said the agency would turn to Capitol Hill to get a pandemic relief bill passed after it called President Donald Trump’s decision to suspend talks on the legislation “heartless.” Dominican Sister Donna Markham told Catholic News Service early Oct. 7 that the president’s decision the day before to pull out of talks and to wait until after the Nov. 3 election to negotiate a bill would stress families that are struggling with unemployment because of the economic recession caused by the coronavirus pandemic. “I’m extremely concerned about the food shortage and the inability of people to purchase food for their families or to pay their rents. To deprive them of their well-being and the well-being of their children in this time seems to me to be extremely cruel,” Sister Markham said. Her comments followed the agency’s strong reaction soon after Trump said he was suspending talks with congressional Democrats on a measure. “This heartless decision is incomprehensible,” Catholic Charities USA said Oct. 6. Archbishop Paul S. Coakley of Oklahoma City, chairman of the U.S. Conference of Catholic Bishops’ Committee on Domestic Justice and Human Development, also urged reconsideration of the move. “I ask the president to reverse his decision, and for all parties to return to negotiations as soon as possible,” he said Oct. 7. 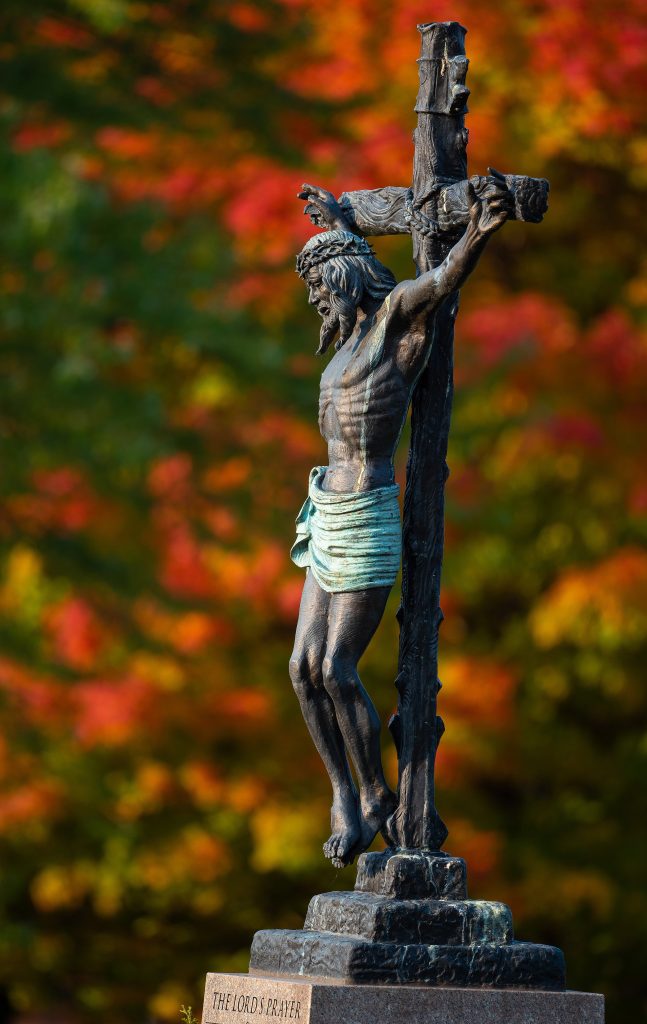 A bronze statue of Jesus on the cross at Allouez Catholic Cemetery in Allouez, Wis., is surrounded by fall colors Oct. 9, 2020. (CNS photo/Sam Lucero, The Compass)