DETROIT (CNS) — Amanda Ross and Hanan Ismail lay prostrate before Christ in the Eucharist at the Cathedral of the Most Blessed Sacrament in Detroit and vowed themselves to the Lord as consecrated virgins. During a liturgy rich in symbolism and imagery, Archbishop Allen H. Vigneron presided over their consecration. There are now seven consecrated virgins in the Detroit Archdiocese, who are part of a worldwide movement of women choosing to live a radical, ancient vocation as brides of Christ in the world. Their small, but growing, presence in the archdiocese mirrors something of a trend seen nationwide, said Judith Stegman, president of the U.S. Association of Consecrated Virgins, based in Lansing, Michigan. The vocation dates to the early days of the Church, and is considered the first form of consecrated life, Stegman said. “Women in the early Church would go to the Apostles and ask to be consecrated as a bride of Christ,” Stegman told Detroit Catholic, the archdiocesan news outlet. “This has always been an act of the Church through the bishop (consecrating) women; the setting aside and setting apart of the person as a bride of Christ.” Although there is no formal registry for the number of consecrated virgins, Stegman said the association’s records show there are 267 living consecrated virgins in the United States.

ROME (CNS) — The coronavirus pandemic has not only shed light on the issues and societal ills plaguing the world, it also has provided a unique opportunity for humanity to band together for the common good, said Ecumenical Patriarch Bartholomew of Constantinople. Addressing the opening assembly of the 35th International Meeting for Peace in Rome Oct. 6, the patriarch said that although the world before COVID-19 “is no more,” all men and women “have in our hands the possibility to build a new beginning, a new beginning that can only be together. Let us begin again by affirming what the pandemic has made more evident: The belonging to one human family of all the peoples of the earth and the attention to caring for creation, which has been able to rest and renew itself, allowing us to rediscover life in many places where it was impossible to imagine it until a few months before,” he said. The Oct. 6-7 gathering was organized by the Rome-based Community of Sant’Egidio. The community has invited religious, political and cultural leaders from around the world to gather for dialogue and to pray for peace each year since St. John Paul II’s interreligious prayer for peace in Assisi in 1986. The meetings include panel discussions and workshops on various themes related to peacemaking, interreligious dialogue and service to the poor.

Barron: If religion becomes an afterthought, ‘our society loses its soul’

NEW ORLEANS (CNS) — With tensions rising over the proper role of religion in society, the broader culture appears to be compartmentalizing religious faith and moral thinking into something akin to “a hobby,” said Los Angeles Auxiliary Bishop Robert E. Barron Oct. 4. He made the comments in his homily at St. Louis Cathedral at the Red Mass of the Archdiocese of New Orleans, which drew judges, lawyers and politicians. “Today, it seems to me the far greater threat is coming from the side of an ideological secularism that would like to shuffle religion off the playing field altogether or, at the very least, to confine it to the realm of privacy so that it would function as a kind of hobby,” said Bishop Barron, founder of Word on Fire Catholic Ministries. The annual Red Mass was attended by Louisiana Gov. John Bel Edwards, members of the Louisiana Supreme Court, other members of the judiciary and public officials. If religious principles were relegated to an afterthought, Bishop Barron said, “then our society loses its soul, our laws lose their rootedness in the moral and spiritual law and our democracy loses its cohesiveness. I would say that resistance to this sort of secularizing attack on religion should be of paramount importance for Catholics within the legal and political establishment.”

VATICAN CITY (CNS) — Pope Francis met privately at the Vatican Oct. 9 with U.S. House Speaker Nancy Pelosi, who was in Rome to speak at a meeting of legislators from around the world in preparation for the U.N. climate summit. The Vatican released photos of Pelosi’s meeting with the pope, but provided no details of the encounter, which took place before Pope Francis addressed the Pre-COP26 Parliamentary Meeting. Pelosi, a Catholic, supports legalized abortion. In September, her archbishop, Archbishop Salvatore J. Cordileone of San Francisco, asked “all Catholics and others of goodwill” to join a prayer and fasting campaign for Pelosi’s “conversion.” In her keynote address to fellow legislators from around the world meeting in Rome Oct. 8, Pelosi said world governments must take bold action in their own countries and when they meet for COP26 in Glasgow, Scotland, in November. “It would be a dereliction of duty for us not to go into the future in a green way and (one) that responds to the urgency of the climate crisis. It’s all about the children,” she said. “We will leave them a world where they can be healthy, where they can thrive and reach their fulfillment.” In his speech to the parliamentarians Oct. 9, Pope Francis spoke of the “important, and indeed, crucial” role of governments in slowing climate change and restoring a healthy environment.

Summit looks at how St. Joseph can play bigger role in lives of Catholics

GARDEN GROVE, Calif. (CNS) — One of the first things anyone learns about St. Joseph, the foster father of Jesus Christ, is that there’s very little information out there on the man himself. He’s mentioned briefly in the Gospels of Matthew and Luke and is believed by some biblical historians to have been quite a bit older than Mary, and to have died before Jesus began his public ministry. For New York Cardinal Timothy M. Dolan, a participant in the online St. Joseph Summit, held Sept. 30 to Oct. 3, “he’s a quiet, effective, humble man and he doesn’t want a lot of attention.” Scott Hahn, a professor of biblical theology at the Franciscan University of Steubenville, Ohio, calls Joseph “a father in the shadows.” Even Marian Father Donald Calloway, whose book “Consecration to St. Joseph: The Wonders of Our Spiritual Father” sparked the summit, acknowledged that for many, Joseph “is in the corner of those Christmas cards.” But he considers Joseph a strong model of humility and service and the best example “of what it means to be a father, to be a man.”

VATICAN CITY (CNS) — Women religious have an essential role in the process of creating a more synodal Church and in preparations for the Synod of Bishops, not just through their prayers and participation, but also by listening to people not usually part of such Church activities, Pope Francis said. “You consecrated women are an irreplaceable presence in the great community on the move, which is the Church,” the pope said Oct. 11 during an audience with members of the general chapter of the Sisters of Charity of St. Jeanne-Antide Thouret. “Consecrated women are an extension of the female presence which walked with Jesus and the Twelve, sharing the mission and making your own unique contribution,” the pope said, noting that the Gospel of St. Luke even names some of the women: Mary Magdalene, Joanna and Susanna. As the Catholic Church takes up its commitment “to grow in synodality,” he said, the Sisters of Charity and other consecrated women have an essential role. While the Sisters of Charity have no “ready-made answers” to what they will bring to the process, which the pope launched Oct. 10, he said the theme of their general chapter provides a clue. The theme of the gathering was “Starting afresh from Bethany, with Martha’s concern and Mary’s listening.” The summit — organized in the Diocese of Orange, California — drew between 30,000 and 40,000 attendees in the United States and about 10 other countries. The summit had 64 speakers and 72 hours of content.

WASHINGTON (CNS) — A U.S. court of appeals temporarily stayed the recent injunction on the Texas abortion law while it reviews the state’s request to reinstate the ban on abortions after six weeks of pregnancy. The ruling was issued the evening of Oct. 8 in one-page order by a three-judge panel of the 5th U.S. Circuit Court of Appeals. This newest order was issued just two days after a U.S. District Court judge had temporarily blocked Texas from enforcing the abortion law. The appeals court accepted the request of Texas state officials to temporarily set aside the ruling by U.S. District Judge Robert Pitman. This gives the Biden administration — which had sued Texas for its abortion law which it called unconstitutional — until Oct. 12 to respond. “Great news tonight,” Republican Texas Attorney General Ken Paxton tweeted Oct. 8 after the appeals court ruling. “I will fight federal overreach at every turn,” he said. Pitman’s 113-page order Oct. 6 said that once the new abortion law in Texas “went into effect, women have been unlawfully prevented from exercising control over their lives in ways that are protected by the Constitution.” 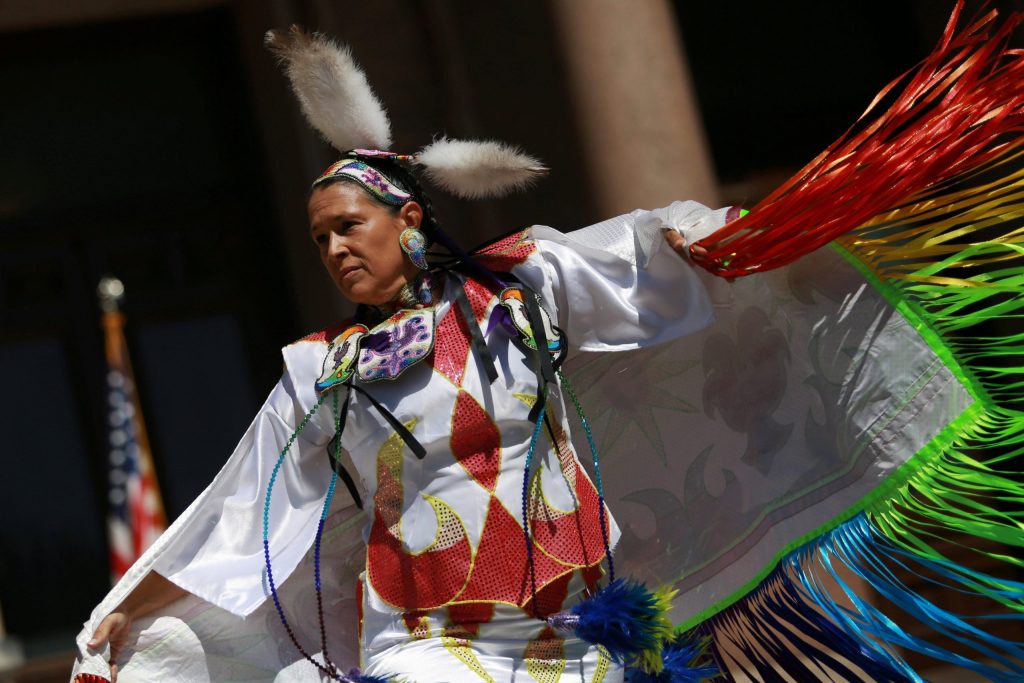 A woman in Austin, Texas, performs a dance during an Oct. 9, 2021, event to mark Indigenous Peoples’ Day. The holiday is celebrated Oct. 11 this year. (CNS photo/Pu Ying Huang, Reuters)