WASHINGTON (CNS) — A digital summit sponsored by In Defense of Christians, “Combating Global Christian Persecution,” showed that the fight against all forms of religious persecution continues with a renewing cast of political leaders. Rep. French Hill, R-Arkansas, last year’s winner of the group’s Congressional Champion award for his support of Coptic Christians in Egypt, pointed out in his remarks that while “religious freedom is part of American foreign policy,” attacks on Coptic Christians continue. A House resolution introduced by Hill last year called for the Egyptian government to abolish its “culture of impunity” and to hold local officials responsible. This year’s Congressional Champion, Rep. Dan Crenshaw, R-Texas, a former Navy SEAL, was recognized for advocating for the preservation of Christians in the Middle East. The event took place Sept. 23. “I saw this lack of freedom in my first three deployments” in Iraq and Afghanistan, he said, seeing “firsthand the history of a country run by extremists.”

WASHINGTON (CNS) — Holy Cross Father John Jenkins, president of the University of Notre Dame, has tested positive for the coronavirus. Notre Dame’s student newspaper, The Observer, said the school’s vice president for public affairs and communications announced that Father Jenkins was tested for COVID-19 when he learned that a colleague had tested positive. He is now “entering an extended period of isolation as indicated by university medical personnel and county health officials. My symptoms are mild, and I will continue work from home,” Father Jenkins said in the emailed message. “The positive test is a good reminder for me, and perhaps for all, of how vigilant we need to be,” he added. The college president had received criticism for not wearing a face mask and for shaking hands during a Sept. 26 White House ceremony where President Donald Trump announced Judge Amy Barrett as his Supreme Court nominee. Barrett, a judge with the U.S. Court of Appeals for the 7th Circuit in Chicago, also is a law professor at Notre Dame.

City’s new indoor worship limit a ‘victory,’ but effort not over

SAN FRANCISCO (CNS) — As of Sept. 30, the city of San Francisco is allowing attendance for indoor worship to be 25% of the capacity of a house of worship, or up to 100 people, which follows the limit set by the state of California. In a message issued late Sept. 29, after the city announced the change, Archbishop Salvatore J. Cordileone of San Francisco called it “an important victory to savor and celebrate.” However, he told the press, “this movement is not over. Our work and victories have just begun.” He thanked people of faith in San Francisco and “the thousands of others across the nation who are joining us at FreeTheMass.com,” a site where people can sign a petition posted in English and Spanish. To date, it garnered 36,210 signatures. In a video message to Catholics on YouTube, he again thanked the faithful for signing the petition and standing up for faith and God, which are “essential,” he said. Efforts will continue to lift allow more people to worship indoors and to make sure our “right to worship is respected in equality with secular activities,” he added.

Post-pandemic world must not return to selfish ‘normality,’ pope says

VATICAN CITY (CNS) — In the aftermath of the coronavirus pandemic, the world must aspire to be better and not return to its previous “sickened” normality of injustice, inequality and environmental degradation, Pope Francis said. “The normality we are called to is that of the kingdom of God, where ‘the blind receive sight, the lame walk, those who have leprosy are cleansed, the deaf hear, the dead are raised, and the good news is proclaimed to the poor,’” the pope said Sept. 30 during his weekly general audience. It is a situation where “no one acts the fool by looking the other way. This is what we must do to change,” he said at the audience in the San Damaso courtyard of the Apostolic Palace. Continuing his series of talks on “healing the world,” the pope said Christ came to heal both the physical and “social” ailments that plague the world and gave the “necessary gifts to love and heal as he did, in order to take care of everyone without distinction of race, language or nation.” Applying those gifts today will “renew society and not return it to the so-called ‘normality,’ which is a sickened normality,” he said.

DENVER (CNS) — St. Frances Xavier Cabrini’s “Christ-like love for others is an inspiring example for all of us to this day,” said a statement from the Archdiocese of Denver issued in advance of Colorado’s new Cabrini Day honoring the patron of immigrants Oct. 5. In February, the Colorado House approved a measure to do away with the state’s observance of Columbus Day, a federal holiday on the second Monday of October, and instead create the Cabrini observance. The Colorado Senate followed suit in early March, and Gov. Jared Polis signed  the bill into law. “We commend the state Legislature for creating the first state holiday honoring a woman, and for choosing an incredible Catholic saint,” the archdiocese said. Popularly known as Mother Cabrini, the saint is revered for her devotion to children, immigrants and the destitute.

CLEVELAND (CNS) — Dominican Sister Ardeth Platte long considered herself a peacemaker and devoted nearly 40 years of her life to praying and witnessing to end war and rid the world of nuclear weapons. Her actions led to imprisonment multiple times, including for the 2002 defacement of a missile silo in Colorado in collaboration with her best friend, Dominican Sister Carol Gilbert, and fellow Dominican Sister Jackie Hudson. Sister Ardeth, 84, died in her sleep at the Dorothy Day Catholic Worker House in Washington early Sept. 30. Funeral arrangements were pending Oct. 5 because of the coronavirus pandemic. Sister Carol told Catholic News Service she discovered her friend in bed, still wearing headphones after apparently listening to the radio. The death shocked Sister Carol. “She was fine. Ardeth listened to the (presidential) debate Tuesday night. She usually listened to them laying down in bed,” Sister Carol said.

NEW YORK (CNS) — The Catholic vote and the coronavirus subtly headlined the annual fundraiser of the 75th annual Alfred E. Smith Memorial Foundation Dinner Oct. 1, livestreamed from the Manhattan residence of New York Cardinal Timothy M. Dolan due to COVID-19. Remarks via recorded videos were delivered by President Donald Trump and former Vice President Joe Biden, the Republican and Democratic nominees, respectively, in the Nov. 3 presidential election. Nearly six hours after the event, just before 1 a.m. Oct. 2, Trump tweeted that he and first lady Melania Trump had tested positive for the coronavirus. The breaking news brought tweets offering prayers for their quick recovery, including from the cardinal, who after thanking the president and Biden for joining the dinner virtually added: “Please also join me in praying for the President, @FLOTUS Melania Trump, & all who suffer from or are affected by Covid-19.” Cardinal Dolan, in the benediction at the virtual Al Smith dinner, said: “God bless America, land that we love. God bless our two candidates. … God mend thine every flaw — the sickness, the tensions, the continued challenges to justice, peace, unity, protection of life and international reconciliation.” 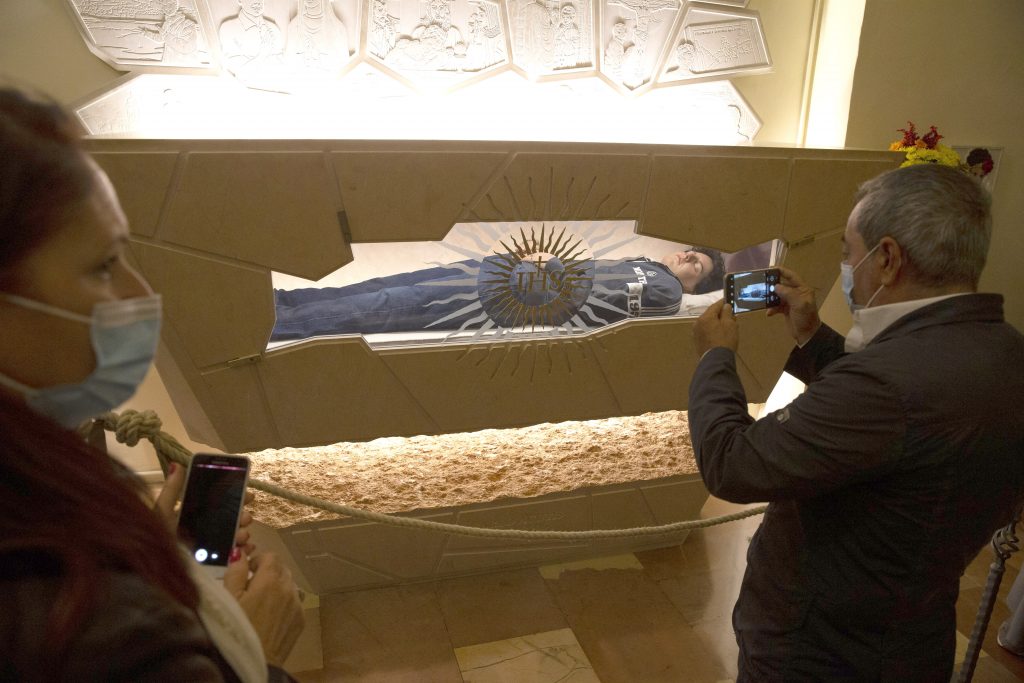 People venerate the tomb of Carlo Acutis, who died in 2006, at the Church of Santa Maria Maggiore in Assisi, Italy, Oct. 3, 2020. The Italian teen, who had a great love for the Eucharist, will be beatified Oct. 10 in Assisi. (CNS photo/Paul Haring)