Preparations underway for global celebrations of World Meeting of Families

VATICAN CITY (CNS) — Cardinal Kevin J. Farrell, prefect of the Dicastery for Laity, the Family and Life, said diocesan celebrations coinciding with the World Meeting of Families 2022 will allow Catholic families to be in “spiritual communion” with Pope Francis and delegates in Rome. The event, which will be in Rome June 22-26, “will always be a worldwide event, as in the past, only this time it will be lived in all the local churches all over the world,” Cardinal Farrell told journalists during a news conference Sept. 30. “We cannot think of sustaining family ministry if we do not involve in these important moments of ecclesial encounter families, who not only are ‘soil to be cultivated,’ but also ‘the seed to be sown in the world’ in order to fertilize it with real and credible witnesses of the beauty of love within the family,” he said. The theme chosen by the pope for the meeting, which was postponed due to the coronavirus pandemic, is: “Family love: A vocation and a path to holiness.”

‘There is dignity in selecting your own groceries,’ says pantry official

GREEN BAY, Wis. (CNS) — For Deacon Bob Hornacek, “the beautiful things” he sees at Paul’s Pantry in Green Bay “is not just what we do, but the way we do it and why we do it.” Paul’s Pantry, founded in 1984, operates as a free grocery store for people in need. It relies on support from the community and does not receive any government funds. Deacon Hornacek, of St. Matthew Parish in Allouez, Wisconsin, has been the pantry’s assistant director since 2019. He describes his job as “half administrative and half on the ground in the pantry every day.” The pantry, with its motto “Neighbors Feeding Neighbors,” has remained open throughout the pandemic. “With COVID, so many places went away (eliminating) any contact. At Paul’s Pantry, we doubled down,” the deacon told The Compass, newspaper of the Diocese of Green Bay. “We are going to stay open because we want to serve people and build relationships with them. We are going to do it as safely as possible, socially distance, extra sanitizing and cleaning, have gloves and masks,” he said. “There is dignity in selecting your own groceries. I don’t want to give you a box of food and have you throw half of it away because you don’t like it. We are here to rescue food and save it from the dumpster, not fill dumpsters.” The pantry is “a grocery store,” he explained.

VATICAN CITY (CNS) — The Vatican announced that Pope Francis will formally launch the process of the Synod of Bishops with a Mass in St. Peter’s Basilica. The Oct. 10 Mass, which officially opens the synodal process, will be preceded by a day of reflection in the synod hall, the Vatican said in a statement published Oct. 1. The Oct. 9 day of reflection, the statement said, will include “representatives of the people God, including delegates of the bishops’ conferences and related bodies, members of the Roman Curia, fraternal delegates, delegates of consecrated life and ecclesial lay movements, the youth council, etc.” According to the schedule released by the Vatican, the day of reflection will begin with a meditation followed by an address by Pope Francis. It will also feature testimonies by people present at the synod hall, including a young woman from South Africa, a bishop from South Korea, and the head of a religious community from France. Participants will also listen to video testimonies from a nun in the United States, a family in Australia and a priest in Brazil.

JEFFERSON CITY, Mo. (CNS) — Archbishop Christophe Pierre, nuncio to the United States, urged Missouri Republican Gov. Mike Parson to respect “the humanity” of death-row inmate Ernest Lee Johnson and “the sacredness of all human life” and stop his Oct. 5 execution. Writing to Parson on behalf of Pope Francis, the nuncio asked that he halt the scheduled execution and grant him “some form appropriate form of clemency. This request is not based upon the facts and circumstances of his crimes; who could not argue that grave crimes such as his deserve grave punishments?” Archbishop Pierre said in a Sept. 27 letter to Parson. “Nor is this request based upon Mr. Johnson’s doubtful intellectual capacity. Rather His Holiness wishes to place before you the simple fact of Mr. Johnson’s humanity and the sacredness of all human life.” Johnson, 61, who is African American, was scheduled to die by lethal injection at the state prison in Bonne Terre at 6 p.m. local time Oct. 5. He was convicted of first-degree murder in 1995 and sentenced to death for killing three employees of a Columbia, Missouri, convenience store — 46-year-old Mary Bratcher, 57-year-old Mable Scruggs and 58-year-old Fred Jones — with a claw hammer. His lawyer and advocates for clemency argued that his execution would be unconstitutional because a 2008 operation for a brain tumor left him with a diminished intellectual capacity.

VATICAN CITY (CNS) — Groups and individuals who have accepted Pope Francis’ invitation to step up their commitment to caring for creation are encouraged to prepare for their journey with a new prayer campaign. Special prayers have been developed for each day of the week for different communities, like parishes, dioceses, religious orders, families, hospitals, schools, businesses and others, that have joined the Laudato Si’ Action Platform. The 40-day prayer campaign began Oct. 4 — the feast of St. Francis — and concludes Nov. 14 — the World Day of Prayer for the Poor. The Vatican Dicastery for Promoting Integral Human Development announced the campaign Oct. 1. The Laudato Si’ Action Platform is “a seven-year journey that will see our communities committed in different ways to becoming totally sustainable, in the spirit of integral ecology,” the pope said in a video message launching the platform May 25. “We need a new ecological approach that can transform our way of dwelling in the world, our lifestyles, our relationship with the resources of the earth and, in general, our way of looking at humanity and of living life,” he said.

WICHITA, Kan. (CNS) — When serving troops in the U.S. Army, Father Ned Blick asked himself a simple question, “What would Father Kapaun do?” A Catholic chaplain from 2008 to 2012, Father Blick spent a year deployed in Iraq and a year in Afghanistan. “Once I was celebrating a Mass, and rockets came and machine gun fire came in,” said Father Blick, who like the late Father Emil J. Kapaun is a priest of the Wichita diocese. He remembered a story about Father Kapaun presiding over Mass amid bombs and rocket fire. “I thought of Chaplain Kapaun, and how he finished the Mass. I continued celebrating the Mass, gave each soldier holy Communion, and they would run out the door after they received,” Father Blick told Catholic News Service. In 1944, Father Kapaun was granted permission to enter the U.S. Army Catholic Chaplain Corps, where he served for two years. He rejoined in 1948, and in 1949 was sent to Japan, then to South Korea with the troops. In June 1950, communist North Korea invaded South Korea, and the U.S. entered the war. Father Kapaun was captured and sent to a prison camp in North Korea, where he continued to serve the men. He died May 23, 1951, and in 2013 was posthumously awarded the Medal of Honor for his heroic actions on the battlefield. It is the United States’ highest military honor. 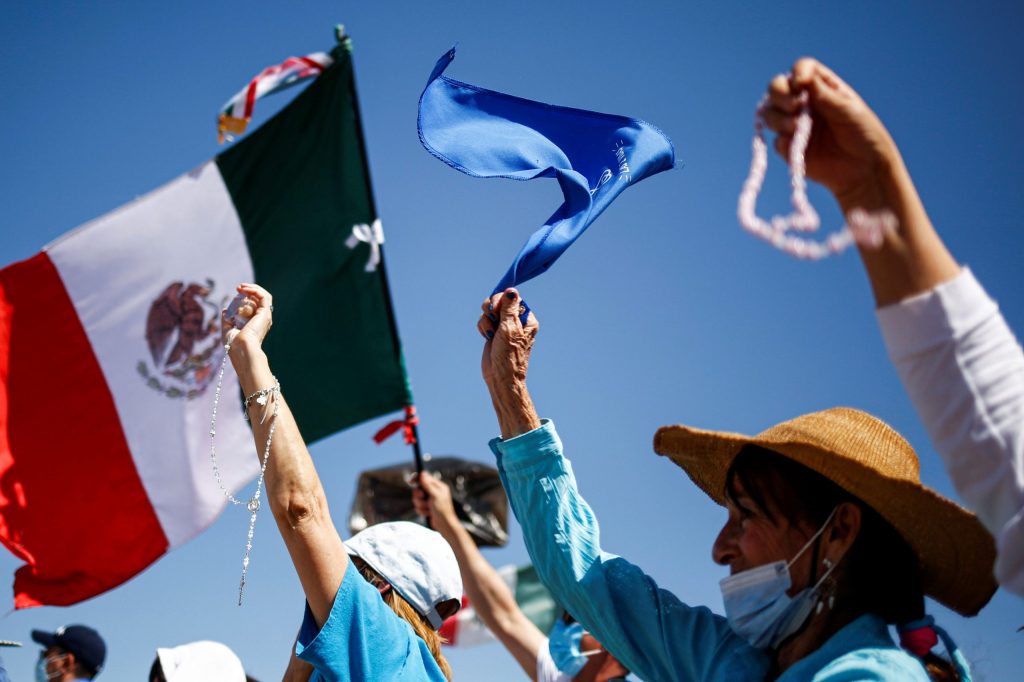