Lejeune was a servant of life, love and truth, postulator says

VATICAN CITY (CNS) — One of the most important “servants of life in the world” was the late French geneticist, Jérôme Lejeune, who dedicated his “scientific genius” to serving children with Down syndrome and their families, said the woman officially promoting his sainthood cause. He was also “a servant of charity,” showing an unconditional love that was rare at the time for these born and unborn children who were at risk of abortion, said Aude Dugast, the postulator of his cause for canonization and the author of a new biography about his life. Dugast spent 14 years conducting research, doing interviews and compiling evidence for Lejeune’s cause, which advanced in early 2021 when Pope Francis recognized Lejeune lived a life of heroic virtue and declared him “venerable.” The confirmation of a miracle attributed to his intercession will be needed for the next step in the process, beatification. She turned that extensive study into a book just published by Ignatius Press, titled “Jérôme Lejeune: A Man of Science and Conscience.” In it she outlines the life and work of the French pediatrician and world-renowned geneticist, who contributed to the discovery of the cause of Down syndrome, staunchly opposed abortion and tirelessly supported his “tiny patients” and their families. Working with others, Lejeune found evidence in 1958 that the physical and intellectual impairments of Down syndrome or Trisomy 21, were caused by an extra copy of chromosome 21. This “was a revolution for the family,” Dugast told Catholic News Service in Rome Oct. 26, because, up until then, people believed the birth of a child with this impairment “was the end of the world.”

Pope may go to Canada as part of reconciliation process, Vatican says

VATICAN CITY (CNS) — Pope Francis is willing to travel to Canada as part of “the long-standing pastoral process of reconciliation with Indigenous peoples,” the Vatican press office said. The Canadian Conference of Catholic Bishops has invited the pope to visit the country, the press office said Oct. 27, although no date or time frame for the trip was mentioned. A delegation of Indigenous leaders, accompanied by several bishops, is scheduled to meet with Pope Francis at the Vatican in December to listen to their experiences of how they and their people have been treated by Catholics in Canada, with special attention to the impact on the Indigenous communities of Canada’s residential schools, many of which were run by Catholic religious orders or dioceses. “Pope Francis will encounter and listen to the Indigenous participants, so as to discern how he can support our common desire to renew relationships and walk together along the path of hope in the coming years,” the bishops’ conference said in a statement after their September meeting. “We pledge to work with the Holy See and our Indigenous partners on the possibility of a pastoral visit by the pope to Canada as part of this healing journey,” the bishops said.

EL PASO, Texas (CNS) — The Biden administration must issue an immediate termination of the Migrant Protection Protocols, also known as the “Remain in Mexico” policy, El Paso Bishop Mark J. Seitz said Oct. 25. “God’s word on how we should treat people forced to migrate is clear: We must welcome and protect,” he said in a statement released by the Catholic Legal Immigration Network. “As the bishop of El Paso, I have seen firsthand the impact of disastrous policies of deterrence at the border such as ‘Remain in Mexico.’ President Biden, as a person who values your Catholic faith and the leader of our country, I implore you to act immediately to end ‘Remain in Mexico’ and put in place at the border humane policies which uphold the value and dignity of every human being,” Bishop Seitz said. He said the “Remain in Mexico” policy “causes needless suffering for those forced to flee who have come to our doorstep in need of protection. It is time to heal, to restore our commitment to asylum, and in the words of the Holy Father, move ‘toward an ever wider we.’” The bishop was quoting the theme of Pope Francis’ message for the 107th World Day of Migrants and Refugees Sept. 26. “Bless each act of welcome and outreach that draws those in exile into the ‘we’ of community and of the Church, so that our earth may truly become what you yourself created it to be: the common home of all our brothers and sisters,” said a prayer, in part, which the pope included in his statement.

WASHINGTON (CNS) — Days ahead of the opening of the 26th U.N. Climate Change Conference in Glasgow, Scotland, a group of faith institutions joined the growing movement to divest from fossil fuels. The group includes 72 institutions — 36 of them Catholic — with assets of more than $4.2 billion. Salesian Father Joshtrom Kureethadam, coordinator of Ecology and Creation at the Vatican Dicastery for Promoting Integral Human Development, welcomed the announcement during an Oct. 26 video conference organized by leading divestment proponents. The Vatican and Pope Francis have become increasingly vocal about shifting investment funds from fossil fuels toward clean energy alternatives. In 2020, as part of the Laudato Si’ Year, the Vatican released guidelines for Catholics to implement integral ecology and other actions outlined in the pope’s encyclical, “Laudato Si’, on Care for Our Common Home.” In very strong language, divestment was recommended,” Father Kureethadam told the online conference. “Last year we announced the Laudato Si’ Action Platform. Among the Laudato Si’ goals there’s ecological economics and it mentioned the need to divest. So the Vatican is supporting this journey.”

WASHINGTON (CNS) — Ecumenical Patriarch Bartholomew of Constantinople — the primary spiritual leader of the world’s estimated 300 million Orthodox Christians — met with Washington Cardinal Wilton D. Gregory Oct. 25 in a chapel at Georgetown University where Orthodox students pray and worship. As a dramatic backdrop to his visit, a new icon was on display at the chapel showing apostles and brothers St. Andrew and St. Peter embracing each other — reflecting the fraternal ties between the Orthodox and Catholic churches and the friendship and shared work of the patriarch and Pope Francis. Greeting the patriarch at the university’s Copley Crypt Chapel, Cardinal Gregory said: “Your presence here today among us reaffirms our mutual commitment to dialogue and to the work of Christian unity.” Washington’s archbishop said he joined Pope Francis in congratulating Patriarch Bartholomew on the 30th anniversary of his election and he called his visit “a blessing to Georgetown University, the Roman Catholic Archdiocese of Washington and to the nation’s capital.”

Congregation confronts its slaveholding past, works for racial justice

LOUISVILLE, Ky. (CNS) — The historic buildings on the motherhouse grounds of the Sisters of Charity of Nazareth, Kentucky, were “built by the hard labor of the enslaved men who made the bricks and laid them in place,” said Sister Theresa Knabel, a member of the congregation. “That these buildings are still standing is a tribute to their labor,” she told participants in the “Walking Together: Pilgrimage for Racial Justice” Oct. 16. The event included a pilgrimage from the Cathedral of the Assumption to Presentation Academy, where the 150 or so participants listened to a panel of Sisters of Charity discuss their congregation’s own pilgrimage — from its early years as slaveholders to its efforts today for racial justice. Sister Knabel began by describing the congregation’s history, admitting aloud: “We were slave owners.” It began with the founding of the order, she said. In 1812, Bishop Benedict Joseph Flaget of the Diocese of Bardstown, Kentucky — a predecessor to the archdiocese — called on young women to help teach the (white) children of Catholic families who’d migrated from Maryland. 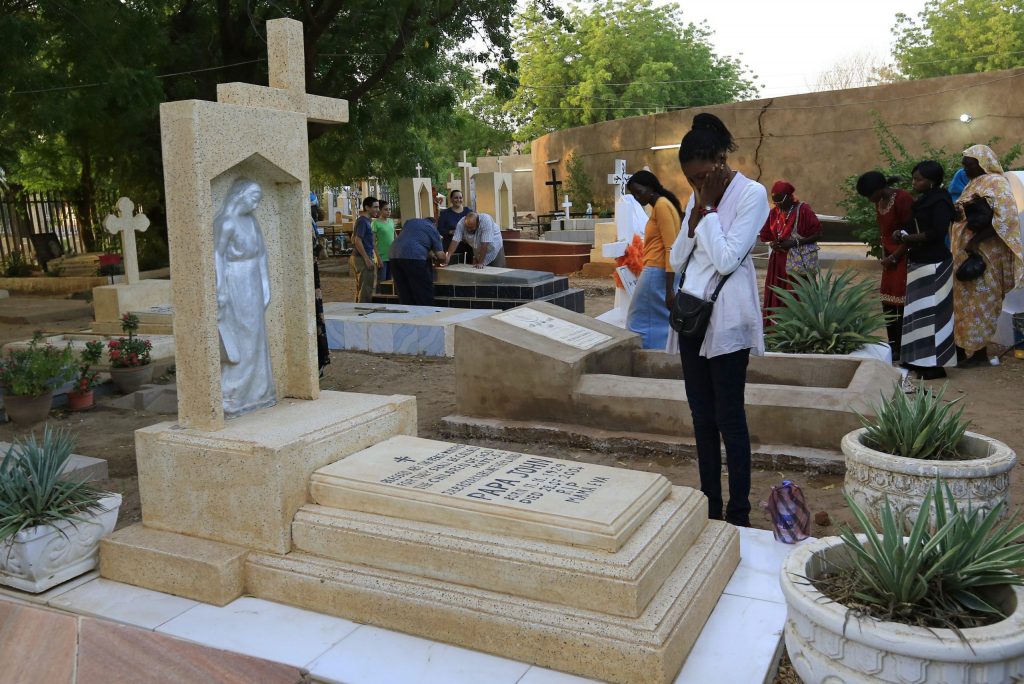 A family prays next to a relative’s grave in a cemetery during All Souls’ Day in Khartoum, Sudan, in this Nov. 11, 2014, file photo. With the continuing pandemic, the Vatican has again extended throughout all of November the opportunity to receive a plenary indulgence for visiting a cemetery to pray for the dead. (CNS photo/Mohamed Nureldin Abdallah, Reuters)