HONG KONG (CNS) – Cardinal Joseph Zen Ze-kiun and five other activists returned to court on Oct. 26 to face charges of failing to register a legal fund meant to help those involved in anti-government protests. Prosecutors said the now-defunct 612 Humanitarian Relief Fund should have been registered with police due to its “massive” size and “systematic” mode of operation, according to the South China Morning Post. In September, the West Kowloon Court found that defendants had a case to answer over their alleged failure to register the fund within a specified period. The case involves the Societies Ordinance, which says “any club, company, partnership, or association of persons, whatever the nature or objects, to which the provisions of (the) ordinance apply,” must register with the police commissioner or ask for an exemption. Cardinal Zen, 90, is being prosecuted as a fund trustee along with former lawmakers Margaret Ng Ngoi-yee and Cyd Ho Sau-lan, singer Denise Ho Wan-see, and Hui Po-keung, a former university professor. Sze Ching-wee was charged as the organization’s secretary. Offenders can be fined HK $10,000 (US $1,274). The court will hear submissions from the defense on Oct. 31.

ST. PAUL, Minn. (CNS) – It’s a busy time of year for St. Paul residents Susan and John Neuville, parents of five children, including two teenage girls. As the school year began, they faced a growing stack of permission slips and release forms for their children’s sports clubs and activities. “I’m required to supply the name of another adult to contact in case of emergency to advise on treatment if I’m unreachable,” Susan said. Without adult permission, her children cannot go on a field trip, have their photo taken, receive basic dental care, be vaccinated, or be served ice cream. “What I would like to understand is how it would make any sense to have that same child decide whether or not to have an abortion,” she said during a news conference at the Minnesota Capitol this September. “Wouldn’t this be the most critical time to ensure that she has the best support available, most likely her own parents?” Susan, who was joined by a group of mothers, was speaking out against a July 11 ruling by Ramsey County District Court that struck six abortion laws down including the law requiring that parents be notified at least 48 hours before an abortion is performed on a minor. Susan, a member of the pro-life group MOMS – Mothers Offering Maternal Support – had spoken out, along with other group members, against the judge’s decision.

WASHINGTON, D.C. (CNS) – Nearly 2,000 students came to Washington, D.C. from Oct. 22-24 for the Ignatian Family Teach-In for Justice, described as the largest annual Catholic social justice gathering in the United States. The participants – from Jesuit high schools, universities, parishes, and groups – spent their time listening to speakers and workshops on social justice issues, praying, and speaking with legislators on Capitol Hill. This year marks the 25th anniversary of the event hosted by the Ignatian Solidarity Network. The first teach-in was hosted under a tent in Fort Benning, Georgia, near the military school formerly known as the School of the Americas, where participants protested the school’s link to human right violators in Latin America, including the training of Salvadoran soldiers responsible for the murder of six Jesuits and two women at the Central American University in 1989. Today, the annual teach-in has moved to Washington, D.C. and incorporates many social justice issues, but its focus of bringing injustices to light remains the same. Participants still draw inspiration from the Salvadoran martyrs, whose pictures line the main stage and are the focus of a prayer service held on the opening night of the conference each year. A persistent theme at this year’s gathering was recognizing the work and experiences of social justice advocates in the past and the need to collaborate in current and future work for justice.

WASHINGTON, D.C. (CNS) – San Francisco Archbishop Salvatore J. Cordileone said he was praying for the husband of House of Representatives Speaker Nancy Pelosi after police said he was “violently assaulted” at home early on Oct. 28 by a man with a hammer. “Please join me in praying for the swift recovery of Paul Pelosi and comfort for his wife and family too. Mother Mary hear our prayer,” Archbishop Cordileone tweeted. San Francisco Police Chief William Scott in an Oct. 28 news conference identified 42-year-old David Depape as the suspect, saying he will be charged with attempted homicide. Scott said authorities were called to the Pelosi home at 2:27 a.m. for a priority well-being check and, upon responding, officers said they encountered the speaker’s husband, 82, and a suspect holding a hammer. “The suspect pulled the hammer away from (Pelosi) and violently assaulted him … our officers immediately tackled the suspect and disarmed him,” Scott said. Both were taken to a local hospital for treatment, police said. Scott said Depape will also be charged with assault with a deadly weapon, elder abuse, burglary, and other additional felonies.

OWENSBORO, Ky. (CNS) – Bridget Filback has always believed in God. “What I believe now is that God spared us for a reason. Now we’re just waiting to see what it is,” said Filback, who with her husband, Rickie, survived the Dec. 10, 2021 tornadoes that devastated western Kentucky and destroyed the couple’s home in Hartford. This fall though, emotions ran high as the Filbacks celebrated the dedication and ribbon cutting for their new house – built not far from the location of their former home. The house is the first of what will be many rebuilt through the disaster relief work of Catholic Charities of the Diocese of Owensboro and other community organizations. Joey Hazelwood, Project Manager for the long-term recovery group of Ohio County – where Hartford is located – said after the Oct. 3 dedication ceremony: “We couldn’t have done it without Catholic Charities.” Katina Hayden, Catholic Charities’ Director of Disaster Case Management, met Hazelwood during one of the county’s meetings about long-term recovery and told him Catholic Charities could help because that’s what their disaster relief is about. Hazelwood’s team broke ground for the Filbacks’ new house in March. Over the following months, his team and hundreds of skilled volunteers from across the country worked hard to provide the Filbacks with a new place to call home. “I’ve seen amazing things these past six months,” Hazelwood said, adding: “it’s hard to explain … one of the best things is all the people we’ve gotten to meet.”

Nigerian Teen Held by Boko Haram: ‘I Don’t Think I Am Able to Forgive Them’

NAIROBI, Kenya (CNS) – As Maryamu Joseph, a 16-year-old victim of Boko Haram violence, recovers from trauma after years of captivity, she finds it hard to forgive the men who abducted her. Maryamu recalls that one day when she was 7, armed men raided her community and went on a killing spree before she was abducted with 21 others. She was caged in a militant camp deep in the Sambisa Forest, in northeastern Nigeria. “They took 22 of us into a thick forest, and we trekked for 22 days before arriving at our destination. They put the Christians in cages, like animals,” Maryamu told the pontifical aid agency Aid to the Church in Need. “The first thing they did was forcefully convert us to Islam. They changed my name to Aisha, a Muslim name, and warned us not to pray as Christians, or we would be killed.” For nine years, she was in bondage in the camp, amid torture and abuse from her abductors, whom she described as heartless and ruthless. “When I turned 10, they wanted to marry me to one of their bosses, but I refused. As punishment, they locked me in a cage for an entire year. They brought food once a day and pushed it under the door without ever opening the cage,” she said in the ACN interview, conducted in her Hausa language. Asked about forgiving the militants for incarceration, Maryamu said she needs time. “I don’t think I am able to forgive them,” she said.

Four Recognized for Their Work in the Pro-Life Movement

WASHINGTON, D.C. (CNS) – Four new awardees were named this year as recipients of People of Life Awards, chosen by the U.S. bishops’ Secretariat for Pro-Life Activities for lifetime contributions to the pro-life cause. Honored at a July dinner for diocesan pro-life leaders and their guests, Mary Huber, Barbara Lyons, Greg Schleppenbach, and the late Laura Jean Ebert joined 37 other recipients since the secretariat established the award in 2007. The award recognizes Catholics who have answered the call outlined by St. John Paul II in his 1995 encyclical “The Gospel of Life” by dedicating themselves to pro-life activities and promoting respect for the dignity of the human person. It is bestowed in honor of their significant and longtime contributions to the culture of life. Huber spent her 24-year career in pro-life ministry at the Diocese of San Bernardino, California, beginning as a part-time bookkeeper and ultimately becoming the director of Respect Life and Pastoral Care for the diocese’s Department of Life, Dignity, and Justice. Lyons began pro-life work in 1974 as volunteer President of the Milwaukee County chapter of Wisconsin Right to Life. She joined the staff of Wisconsin Right to Life in 1977 where she served as Legislative Director for 10 years, becoming Executive Director in 1987. Schleppenbach has dedicated his career to pro-life advocacy. He directed the pro-life office at the Nebraska Catholic Conference from 1991 to 2014 and served as Nebraska Catholic Conference’s Executive Director for two years. Ebert, who passed away in 2021, spent her life in dedicated service to the Catholic Church and the pro-life movement. She helped establish pro-life pregnancy centers in Arkansas, Oklahoma, Texas and Canada. She also served as a housemother at a maternity home in Arkansas.

SEATTLE (CNS) – Celebrating the 10th anniversary of St. Kateri Tekakwitha’s canonization and the local miracle that elevated her to sainthood, Native people and others from around the Seattle Archdiocese gathered for a Mass at St. James Cathedral on Oct. 22. “She was called to be a saint from the day she was born,” said Elsa Finkbonner of Ferndale, whose son Jake was healed from flesh-eating bacteria in 2006 when he was 6. It was the second miracle needed for St. Kateri’s canonization by Pope Benedict XVI on Oct. 21, 2012. “Her significance in Jake’s healing is clear, it’s precise and it could not have been more planned,” Elsa told the congregation. Jake suffered from a seemingly minor cut to his lip during a basketball game, which developed into an infection with flesh-eating bacteria. Two days later, he was airlifted to Seattle Children’s hospital; the next day, doctors told his parents, Elsa and Donny: “If you guys are praying people, you need to pray, because we’re just trying to save your son’s life,” Elsa recounted. Father Tim Sauer (who at the time was their pastor at St. Joseph Parish in Ferndale), suggested they pray to then-Blessed Kateri, an Algonquin/Mohawk woman born in the 17th century, for her intercession to heal Jake, who is half Lummi Indian. The Finkbonners and many others prayed to Kateri. Elsa also recounted how St. Anne Sister Kateri Mitchell, who happened to be in Seattle for a meeting, placed a relic of Blessed Kateri on Jake at the hospital and prayed over him with Elsa. The next day, Elsa said, doctors told the Finkbonners that the disease ravaging Jake’s body for nearly two weeks had stopped progressing. 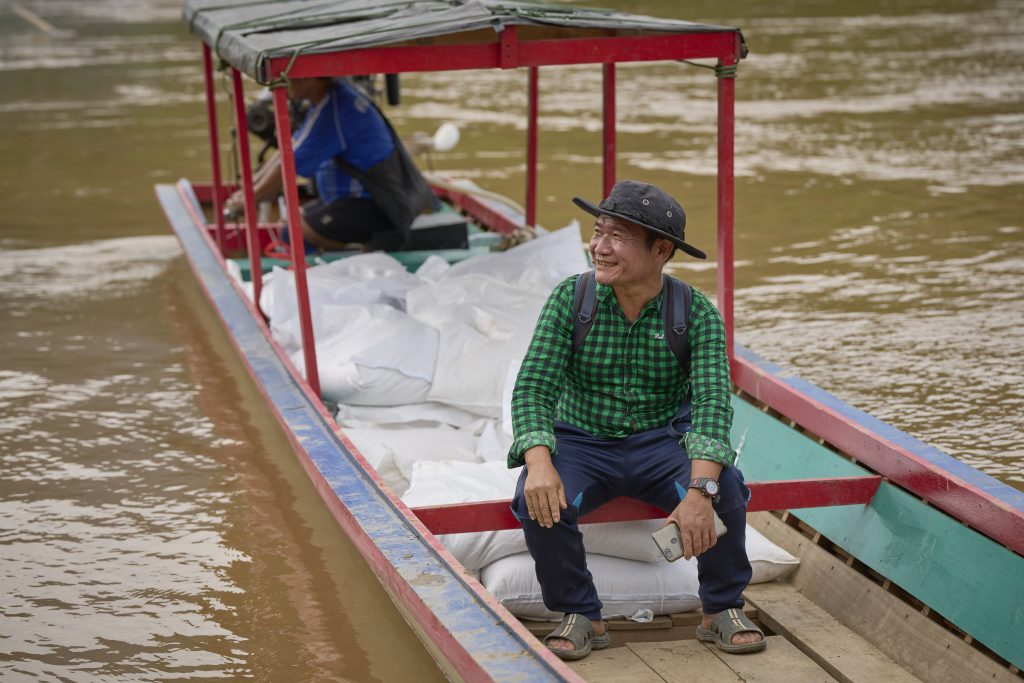 Pah Kler, a Burmese Catholic catechist who supervises the movement of food and other humanitarian supplies to internally displaced families hiding in the forests of Myanmar, rides in a boat loaded with bags of rice in Mae Sam Laep, a Thai village on the Salween River, which marks the border between Thailand and Myanmar, Sept. 29, 2022. Boats are loaded here with food and other humanitarian supplies, the first stage of transporting the material to communities of displaced people within Myanmar. (CNS photo/Paul Jeffrey)