WASHINGTON (CNS) — The U.S. bishops renewed the mandate of their Ad Hoc Committee Against Racism for a second three-year term. The proposal was aired Nov. 16, the first day of the bishops’ Nov. 16-17 fall general meeting, which this year is being conducted entirely online. The vote to reauthorize the committee, taken via email Nov. 16, was 194-3 with one abstention; results were announced Nov. 17. The renewal required passage by a majority of bishops present and attending; 301 bishops participated in the meeting at its peak Nov. 16. Created in August 2017 for a single three-year term, its mandate would have expired in August. However, with the cancellation of the U.S. Conference of Catholic Bishops’ spring meeting in early June due to the pandemic, the USCCB Executive Committee approved an action item later that month from its Committee on Priorities and Plans in mid-June to continue the ad hoc committee’s authorization “until the next USCCB General Meeting.” The ad hoc committee has drafted an operational plan for the USCCB’s 2021-24 strategic plan focusing on “combating racism in education, training the trainer to support theological, liturgical and pastoral needs, youth and young adult engagement, formation … advising dioceses” and “collaborating with ecumenical partner organizations.”

WASHINGTON (CNS) — Although the U.S. bishops’ four-year strategic plan was adopted one year ago, it was not scheduled to go into effect until January 2021. That gave the bishops a window to address two issues that have captured the world’s attention since last November: the coronavirus pandemic and racial inequality. Addendums to the strategic plan were approved during the Nov. U.S. Conference of Catholic Bishops’ fall general meeting conducted entirely online. The 193-3 vote, with two abstentions, was taken via email Nov. 16, and results were announced Nov. 17. The modifications to the strategic plan required a majority email vote of those bishops present and attending; at its peak Nov. 16, 301 bishops had logged on to the meeting. The addendums in the plan, presented to the bishops by the USCCB Committee on Priorities and Plans, included making pandemic recovery became a new priority for the plan, with the priority to “promote the healing of the personal, spiritual and societal wounds of COVID-19 through the sacrificial love of Jesus Christ, the Divine Physician.” The May 25 killing of George Floyd in Minneapolis brought about further revision to the strategic plan in include anti-racism efforts.

VATICAN CITY (CNS) — The presence of Latin Americans around the world has enriched the Catholic Church with a renewed zeal for the Gospel, Pope Francis said. Christian communities in northern and central Europe have “benefited” greatly from Latin American devotions such as the feast of Our Lady of Guadalupe from Mexico and the feast of Christ of the Miracles, which originated in Colombia, the pope said Nov. 20 to students and faculty of Rome’s Pontifical Latin American College. “The rich cultural mix that made evangelization possible is reproduced again today,” he said. “The Latino people meet among themselves and with other people thanks to social mobility” and new forms of communication. Addressing the college’s faculty and staff, the pope reminded them of their calling to sow the seeds of the Gospel “in a generous way, without prejudices” as God sows; he “does not look at the hardness of the ground, nor the presence of rocks or thistles; he does not yank the darnel to not remove from it the good seed of the kingdom.” 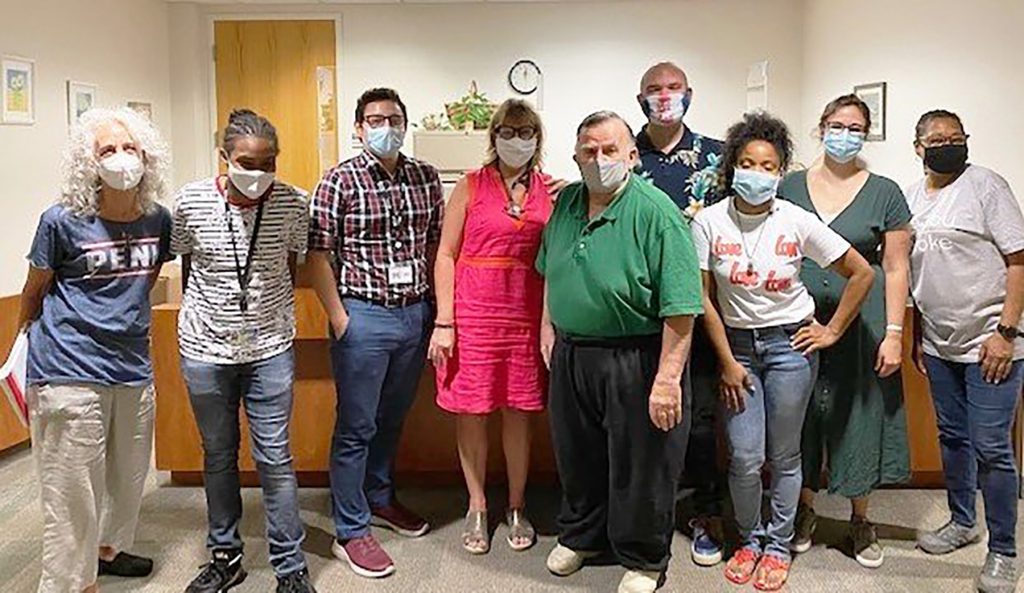 Father John Fields, an archpriest of the Ukrainian Catholic Archeparchy of Philadelphia (in green shirt), is seen in this undated photo with a University of Pennsylvania research group undergoing trials for the Moderna Inc. COVID-19 vaccine. On Aug. 31, 2020, Father Fields, director of communication for the archeparchy, received his first injection in the vaccine study. (CNS photo/courtesy Father John Fields)