Defend the Country, Defend Your Hearts, Cardinal Says at Mass for Ukraine

VATICAN CITY (CNS) – The Vatican is willing to do whatever it takes to broker a cease-fire and bring an end to the war on Ukraine, Pope Francis said. “We are continually watching as the situation evolves” concerning ways the Vatican’s diplomatic efforts could help, he said in an interview with the Italian newspaper La Stampa. Vatican News published the interview on Nov. 18. The Vatican Secretariat of State is working diligently every day, looking at every possibility, and “giving weight to every opening that could lead to a real cease-fire and real negotiations,” he said. “The Holy See is willing to do everything possible to mediate and end the conflict in Ukraine. We are trying to develop a network of relationships that will foster a rapprochement between the parties, to find solutions. Also, the Holy See does what it must to help the prisoners,” he said, as well as provide humanitarian support “for the people of tormented Ukraine, whom I carry in my heart along with their suffering.” Asked about the prospects for reconciliation between Russia and Ukraine, the pope said, “I have hope. Let’s not resign ourselves, peace is possible. But we must all strive to demilitarize hearts, starting with our own, and then defuse, disarm violence. We must all be pacifists,” he said.

WASHINGTON, D.C. (CNS) – A bill on same-sex marriage advancing in the Senate is “a bad deal for the many courageous Americans of faith and no faith who continue to believe and uphold the truth about marriage in the public square today,” said New York Cardinal Timothy M. Dolan. “It is deeply concerning that the U.S. Senate has voted to proceed toward potential passage of the Respect for Marriage Act, which would essentially codify the Supreme Court’s ruling in Obergefell (in 2015) that found a constitutional right to same-sex civil marriages,” the cardinal said on Nov. 17. The Respect for Marriage Act “does not strike a balance that appropriately respects our nation’s commitment to the fundamental right of religious liberty,” said the cardinal, who is Chairman of the U.S. bishops’ Committee for Religious Liberty. The Senate advanced the measure with a 62-37 vote on Nov. 16. A final vote will take place after the Thanksgiving holiday. Every Democrat supported it, and they were joined by 12 Republicans after they worked out an amendment they said would protect religious freedom. These senators “have claimed that their amended bill ‘respects and protects American’s religious liberties,’ but the provisions of the act that relate to religious liberty are insufficient,” Cardinal Dolan said. Obergefell “created countless religious liberty conflicts, but the act offers only limited protections,” he said.

West Must Act to Stop Terrorism, Nigerian Bishop Says at Launch of Report

LONDON (CNS) – Nigeria is at risk of following the fate of Afghanistan and being overrun by Islamist insurgents unless the West acts firmly to prevent terrorist violence there, an African bishop told British politicians. Bishop Jude Arogundade of Ondo, Nigeria, said the Christians of his country are suffering persecution so intense that it bordered on genocide. “The Catholic Bishops’ Conference of Nigeria has spoken against the unprecedented insecurity situation in Nigeria repeatedly but to no avail,” he said in a Nov. 16 speech in a committee room of the Houses of Parliament. “We have walked for life, protested, and even called the President (Muhammadu Buhari) to resign if he is incapable of fulfilling the basic purpose of government – the security of lives and properties of citizens. Even at that, nothing has changed,” he said. “With 3,478 people killed as of June this year and the increased cases of terror thereafter,” he said he strongly wished to appeal to the U.K. government and “all people of goodwill to compel the Nigerian government to stop the genocide. Or, in the least, ask for help from other countries before Nigeria is overrun, as is the case of Afghanistan.”

Migrants from Middle East Fear Tightening of Restrictions in Sweden

MALMÖ, Sweden (CNS) – A visitor coming from the Middle East to Malmö could feel quite at home with great falafel lovingly made by proud Palestinian owners of Falafel No. 1, reputedly the best offered in Sweden. Or a visitor could buy Arabic, Turkish, Indian, and other foreign foodstuffs from a mall in Rosengard, a district drawing a vast array of ethnicities and migrant communities. Home to more than 170 nationalities among its 350,000 inhabitants, this multicultural city on Sweden’s southern coast has drawn refugees fleeing conflict and religious persecution at home. But now Sweden’s newly elected government is proposing to tighten restrictions on immigration, threatening asylum-seekers’ hopes of a safe haven. In the past, Sweden has been viewed as Europe’s most welcoming country for refugees. Afghans here who have firmly established Christian convictions and professions of faith attested to by their churches told Catholic News Service they feel particularly vulnerable as they struggle to be granted asylum in Sweden. Rights activists familiar with the challenges Afghans face with migration in Sweden point out there is a 4-5 times greater risk of rejection for Afghan adults, even young adults, compared to those who are still younger than 18. The change in migration policy due to the election comes as Open Doors, a leading persecution research watchdog, warns that Afghanistan is now the most dangerous place in the world to be a Christian. This follows the militant Taliban takeover of the country in August 2021 in the wake of the abrupt U.S. military withdrawal. So, any return there would likely mean certain death, as would a return to neighboring Iran. “We have already noticed that most political parties have changed their attitude toward immigration,” Swedish Cardinal Anders Arborelius told CNS.

BALTIMORE (CNS) – A Ukrainian Catholic archbishop asked his fellow U.S. bishops on Nov. 16 to pray for Ukraine, and, if possible, to go to Ukraine and pray there for its people, inviting them on a trip he is embarking on in February. What Ukrainians are facing amounts to genocide, he said. In Baltimore, on the second and last public day of the fall general assembly of the U.S. Catholic Conference of Bishops, Archbishop Borys Gudziak of the Ukrainian Catholic Archeparchy of Philadelphia thanked the bishops and their leadership for spearheading U.S. Catholic support for a nation under attack by Russia since February. He spoke of the hospital, schools, cities, and lives snuffed out or destroyed in Ukraine since Russia began attacking it. “Ukraine was like a lamb,” he said, having reduced its army because it was not interested in fighting with anyone. “It was not interested in aggression. It wants nothing from Russia.” But under attack, it has come to embody the best of Catholic social doctrine, he said, organizing, mobilizing, and being part of a worldwide movement of solidarity that seeks to help David triumph over Goliath. “Russia is the last of the European empires, and scandalously it is the last to use the Gospel, the Church, to justify colonialism,” he said.

University Community Comes Together in Prayer After Fatal Shooting

RICHMOND, Va. (CNS) – Students at the University of Virginia in Charlottesville are experiencing “great sadness and even anger” and “a tremendous amount of grief” following a shooting on the grounds the night of Nov. 13, said Dominican Father Joseph-Anthony Kress, Chaplain of the university’s Catholic Campus Ministry. “Obviously for the students who were friends, teammates, hall mates, with the young men that were killed, they’re taking it pretty hard, and they’re devastated,” he said, adding that “the trauma” of having to shelter in place for 12-plus hours affects the whole student population. “When an entire university community of 18- to 22-year-olds gets a text message in all capital letters that says, ‘Run, hide, and fight,’ that has a major impact on you,” he told The Catholic Virginian, Richmond’s diocesan newspaper. “So they’re struggling with that.” Just after 11 p.m. on Nov. 13, Devin Chandler, Lavel Davis Jr., and D’Sean Perry, all members of the university’s football team, were fatally shot on the grounds. Two other students were wounded. The University of Virginia issued a shelter-in-place order that was not lifted until the suspected gunman was arrested the next morning. He was identified by police as Christopher Darnell Jones Jr. He faces three charges of second-degree murder and three counts of using a handgun in the commission of a felony. Father Kress described the current situation at the university as “kind of the emotions of a conflicted heart.” 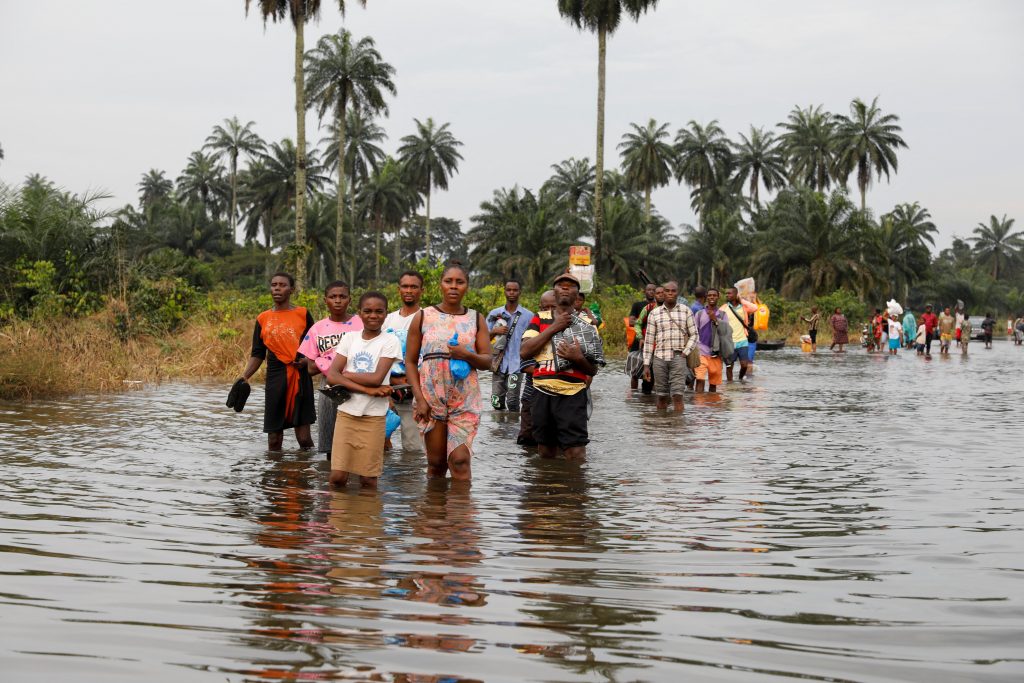 Residents wade through floodwaters in Obagi, Nigeria, Oct. 21, 2022. Nigeria is currently experiencing severe flooding that has destroyed homes and farmlands, especially in communities along the floodplains of the two major rivers — the Niger and the Benue. (CNS photo/Temilade Adelaja, Reuters)