VATICAN CITY (CNS) — The recent conviction of a former Salvadoran colonel for the murder of five Spanish Jesuit priests during the civil war in El Salvador is a major step forward on the path of gaining justice and healing old wounds, Cardinal Michael Czerny said. In a Nov. 16 message commemorating the 31st anniversary of the Spanish Jesuits, a Salvadoran Jesuit and two women, Cardinal Czerny, undersecretary for the Vatican’s Migrants and Refugees Section, said the conviction was also a “vindication for the victims” of the El Mozote massacre, in which 800 civilians were murdered by the Salvadoran army in 1981. “In front of these events and the small steps that have been taken, it is worth remembering the words of Pope Francis in ‘Fratelli Tutti,’ his most recent encyclical: ‘Goodness, together with love, justice and solidarity, are not achieved once and for all; they have to be realized each day,’” he wrote. According to the United Nations, over 75,000 people died during El Salvador’s bloody 12-year civil war, many of whom were killed by government-sanctioned death squads.

MEXICO CITY (CNS) — Church leaders in Central America prayed for protection as a second hurricane in less than two weeks stormed toward the already battered region. Officials of the church’s aid agency, Caritas, and parishes again mobilized to provide shelter to populations still trying to clean up and rebuild after Hurricane Eta deluged Nicaragua, Honduras and Guatemala. “We ask God with faith that (Hurricane Iota) doesn’t attack us with as much strength,” as the previous Hurricane Eta did, Cardinal Óscar Rodríguez Maradiaga of Tegucigalpa prayed Nov. 15, according to Honduras media outlet Radio América. “It’s sad that we live in fear, not simply due to the tragedy we experienced with Eta, but due to the threat of another hurricane.” Hurricane Iota gathered strength over the Caribbean — reaching Category 5 status — and was expected to hit the Mosquito Coast region near the Nicaragua-Honduras border sometime late Nov. 16. The U.S. National Weather Service described a “catastrophic situation unfolding for Nicaragua” with an “extreme storm surge of 15-20 feet, destructive winds and up to 30 inches of rainfall.” Even worse, Hurricane Iota was expected to make landfall in almost the “exact same location” as Hurricane Eta less than two weeks earlier.

WASHINGTON (CNS) — As election returns became more clear after Nov. 3, polling data indicated President Donald Trump ended up with about 50% of the Catholic vote, but the margin of white Catholics backing him was significantly less than four years ago. This, according to Associated Press/Votecast data, cost Trump Wisconsin and Michigan, where he’d eked out 1% margins in 2016. Among white Catholics, Trump held a 15% margin over his Democratic challenger, Joe Biden, but that was a sharp decline from 2016, when that margin was 33% over Hillary Clinton. Did President-elect Biden manage to close the so-called “God gap” among voters who strongly identify with their religious faith? Alana Schor, an AP reporter who covers faith issues, thinks that might be possible. The former vice president “just wove this powerful narrative as a person of faith,” she said as part of a Georgetown University online panel Nov. 10. She called that “a big step forward for Democrats, who historically have ceded that ground.” The discussion, “Faith and the Faithful in the 2020 Election,” was sponsored by Georgetown’s Initiative on Catholic Social Thought and Public Life.

HOUSTON (CNS) — Many impacted by pandemic restrictions may feel imprisoned, but Texas prisons and halfway houses are truly locked down as COVID-19-related deaths have risen. According to a Texas Department of Criminal Justice report, 166 inmates and 21 employees, including guards and chaplains, statewide have died to date from complications of the virus. Those deaths were out of the 23,362 inmates and 5,438 staff who have tested positive for the coronavirus, stated the department’s website update. More than two-thirds of inmates who died from COVID-19 complications have been Black or Hispanic, news outlets reported. The general inmate population is a third Black, a third Hispanic and a third white. On Nov. 11, Texas became the first state with more than 1 million confirmed COVID-19 cases. The Archdiocese of Galveston-Houston’s Office of Correctional Ministries usually provides Masses, occasional weekend spiritual retreats and gifts to prisoners. But most ministries have been locked out for the past several months with no volunteers allowed for the foreseeable future, including Christmas holidays, said Deacon Alvin Lovelady, correctional ministries director.

Vatican seeks to replace its service vehicles with all-
electric fleet

VATICAN CITY (CNS) — As part of its long-running efforts to respect the environment and reduce its use of resources, the Vatican said it was gradually trying to replace all its service vehicles with an all-electric fleet. “Soon we will start collaborating with automobile manufacturers who are able to provide electrical vehicles for evaluation,” said Roberto Mignucci, director of workshops and equipment for the office governing Vatican City State. He told L’Osservatore Romano, the Vatican newspaper, Nov. 10 that an electric fleet was perfect since the average annual mileage for each of their many service and support vehicles is less than 4,000 miles (6,000 km) given the small size of the 109-acre city state and the close proximity of its extraterritorial properties, such as the papal villa and farm at Castel Gandolfo, 13 miles south of Rome. The Vatican plans to increase the number of charging stations it already has installed for electric vehicles to include other extraterritorial properties surrounding the basilicas of St. Mary Major, St. John Lateran and St. Paul Outside the Walls, he said. Over the years, several car manufacturers have donated different kinds of electric vehicles to the pope, and the Japanese bishops’ conference gave the pope a hydrogen-powered popemobile in October. 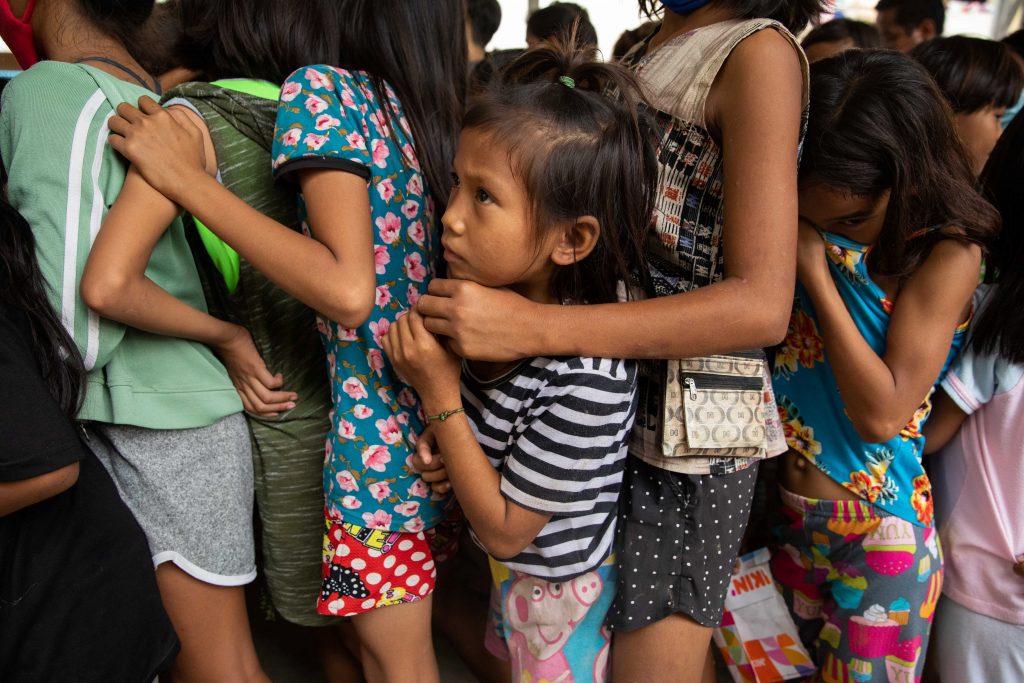 Children wait in line for food at an evacuation center in Manila, Philippines, Nov. 14, 2020, after being forced from their homes from flooding caused by Typhoon Vamco. Five tropical storms or typhoons have hit the Philippines in a three-week period, including the strongest typhoon since 2013 and the biggest floods since 2009. (CNS photo/Eloisa Lopez, Reuters)