VATICAN CITY (CNS) — In the midst of a pandemic, when so many people are suffering and tempted to despair, the teachings of both Christianity and Hinduism call believers to spread hope through gestures of care and concern, said the top officials of the Pontifical Council for Interreligious Dialogue. Amid the difficulties of the COVID-19 pandemic, the council expressed hope that the Hindu celebration of Diwali would “dispel every cloud of fear, anxiety and worry, and fill your hearts and minds with the light of friendship, generosity and solidarity!” Diwali is a festival focusing on the victory of truth over lies, light over darkness, life over death and good over evil. The Vatican released its 2020 message to Hindus Nov. 6 ahead of the festival that begins Nov. 12 in most countries. Signed by Cardinal Miguel Angel Ayuso, council president, and Msgr. Indunil Janakaratne Kodithuwakku, council secretary, the message for Diwali 2020 was the 25th annual message wishing Hindus well during the festival and proposing themes of common concern for dialogue and action. With the coronavirus pandemic still raging, the message said, it is appropriate to discuss ways “to encourage a positive spirit and hope for the future, even in the face of apparently insurmountable obstacles; socioeconomic, political and spiritual challenges; and widespread anxiety, uncertainty and fear.”

NAIROBI, Kenya (CNS) — Kenyan college students are frustrated that their studies have been interrupted because the country’s internet infrastructure is too inadequate to maintain an online learning environment during the coronavirus pandemic. They have complained of disruptions in service and slow speeds that cause long delays in communication. They also said the high cost of connecting online has prohibited their full participation in college coursework. “Many a times, you would need a technician next to you to ensure all is smooth-going,” said Reagan Kocholo, a Sudanese student studying journalism at Catholic-run Tangaza University College in Nairobi. Online, or e-learning as it is known in Kenya, has become the primary educational alternative during government-mandated lockdowns because of the pandemic. “On one front, it has been the question of technical disruptions due to poor internet connectivity as well as high purchase of bundles, necessary for the e-learning process,” Kocholo told Catholic News Service. “Sometimes it would happen in either the beginning, middle or the end of lessons. It could either be from my side or the lecturer’s side,” he said.

Cardinal Tumi, 90, released after being kidnapped with 12 others

VATICAN CITY (CNS) — After armed men abducted Cardinal Christian Tumi along with a dozen other people in the northwest region of Cameroon Nov. 5, local reports said he was released Nov. 6. It was still unclear as of midday Nov. 6 who else in the convoy had been freed or was still being held. After the cardinal’s capture, Bishop George Nkuoof Kumbo told Fides, the news agency of the Congregation for the Evangelization of Peoples, “We have faith that the cardinal and the others will be released safe and sound. We are looking for all possible ways to ensure their release.” Cardinal Tumi, the 90-year-old retired archbishop of Douala, was abducted in the late afternoon on the road to Kumbo along with King Fon of the Nso people, who are native to the northwest region. The king was reportedly heading back to his traditional palace after years of self-imposed exile because of fighting in the area. Archbishop Samuel Kleda of Douala told Vatican News Nov. 6 that the cardinal phoned while he was being held and said he had been interrogated, but not hurt, by his kidnappers. According to Fides, Cardinal Tumi has been actively engaged in trying to resolve a crisis that has engulfed Cameroon’s Anglophone regions in the northwest and southwest, which had once been British-ruled territory; the English-speaking people there represent a minority — about 20% — of the population of the entire, mainly French-speaking, nation.

VATICAN CITY (CNS) — As the Italian government imposed new restrictions to prevent the further spread of COVID-19, the Italian bishops’ conference said churches will remain open for prayer and for Masses with the public. Vincenzo Corrado, the bishops’ director of communications, said Nov. 5 that the new restrictions signed by Italian Prime Minister Giuseppe Conte allow for “access to places of worship,” as long as social distancing measures are observed to avoid crowding. While other countries in Europe have announced new lockdowns as infections continue to rise, Conte has resisted implementing a second nationwide lockdown. The measures he announced Nov. 3 include a nationwide curfew from 10 p.m. to 5 a.m., closing shopping centers over the weekend, the total closure of museums, movie theaters and gyms, and online classes for high school students. Additional lockdown measures are based on a new three-tiered system that divides the country into zones — yellow, orange and red — depending on the level of contagion.

WASHINGTON (CNS) — Calling a Vatican report on its investigation into its knowledge of sexual improprieties of Theodore McCarrick while a clergyman, Archbishop José H. Gomez of Los Angeles said the findings mark “another tragic chapter in the Church’s long struggle to confront the crimes of sexual abuse by clergy.” The president of the U.S. Conference of Catholic Bishops also said in a Nov. 10 statement as the report was being released at the Vatican that the findings were being reviewed by U.S. Church leaders, and he expressed gratitude for Pope Francis’ effort to address clergy sexual abuse. “We are studying these findings,” he said, “and we are grateful to our Holy Father, Pope Francis, for his pastoral concern for the family of God in the United States and his leadership in calling the Church to greater accountability and transparency in addressing issue of abuse and the handling of abuse claims at every level.” The report summarizes the actions of Church officials, including earlier popes, that led McCarrick to rise through the Church hierarchical structure to become a cardinal despite years of rumors of sexual impropriety.

MEXICO CITY (CNS) — Caritas, the church’s charitable agency, was responding to Hurricane Eta, which hit Nicaragua Nov. 3 and threatened to provoke devastating flooding and destruction as it moved through Central America. Hurricane Eta made landfall on the Mosquito Coast of northeastern Nicaragua near the municipality of Puerto Cabezas, where strong winds ripped the roofs off of buildings. Father Francisco Chavarría, Caritas director in Nicaragua, told Catholic News Service that the agency was working with parishes along the Coco River, which forms the border with Honduras and is home to indigenous Mayangna and Miskito peoples. Caritas Nicaragua was working with the support of Trócaire — the overseas development agency of the Irish Catholic Church — and Catholic Relief Services, the U.S. bishops’ international relief and development agency. Timothy Hansell, country manager in Nicaragua for CRS, said Nov. 4 that the indigenous Miskito and Mayangna communities affected by the storm already were extremely vulnerable. We do not yet know the full extent of the impact, as many are isolated and do not have phones or electricity, but we are seeing some photos of the destruction that has left families with nothing,” he said.

VATICAN CITY (CNS) — In November, when many Christians say special prayers for their deceased loved ones, chrysanthemums are the flowers seen most often in Italian churches and on Italian graves. A chrysanthemum is liturgically appropriate, Father Danilo Priori said, not because it has an inherent symbolic value, but because it is plentiful in November, it comes in many colors and, even when used as cut flowers, it is long lasting, which is a sign of “our lasting prayers.” Father Priori, pastor of Rome’s St. Martin parish, teaches a bimonthly course on arranging flowers for churches. He earned a diploma from the Italian florists’ association and has studied with the Pious Disciples of the Divine Master, a women’s religious order known throughout Italy for liturgical art. In an interview Nov. 3 with Vatican News, the priest said the first and most important rule of arranging flowers for a church is: “You must avoid waste and, therefore, avoid large compositions and spending a lot of money because the first objective always would be to help people in difficulty.” 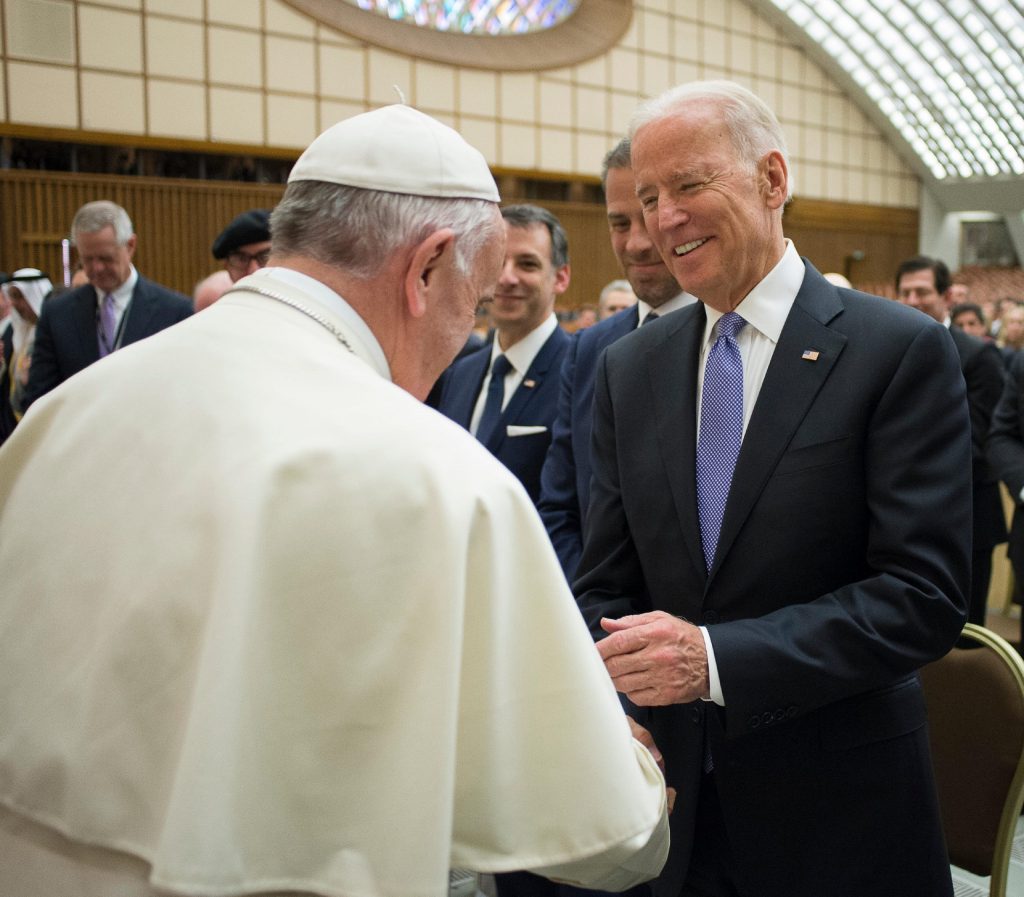 Pope Francis greets U.S. Vice President Joe Biden after both spoke at a conference on adult stem cell research at the Vatican in this April 29, 2016, file photo. News organizations have projected that Biden will be the 46th president of the United States, making him the second Catholic in the country’s history to be elected to the nation’s highest office. (CNS photo/L’Osservatore Romano)