ROCHESTER, Minn. (CNS) – Bishop Robert E. Barron of Winona-Rochester expressed outrage on Nov. 2 over the desecration of several graves and the columbarium at the diocese’s Calvary Cemetery in Rochester “with hateful and obscene graffiti” on Halloween night. He assured his prayers for families “of those whose final resting places were so dishonored.” The diocese “will cooperate with police in assuring that those responsible are brought to justice,” he added in a statement issued on All Souls’ Day, when the Catholic Church “honors our beloved dead. Cemetery staff is working diligently to repair the damage and restore the grounds,” Bishop Barron said, and he pledged to bless and reconsecrate “this sacred space” once the staff’s task “is completed. May the souls of the faithful departed through the mercy of God rest in peace,” Bishop Barron added. Arson, vandalism, and other destruction have taken place at more than 100 Catholic sites across the United States since May of 2020.

INDIANAPOLIS (CNS) – The Thomas More Society, a not-for-profit, national public interest law firm based in Chicago, has submitted an amicus curiae, or friend-of-the-court brief, to the Indiana Supreme Court supporting the state in a suit challenging its recently passed abortion law. The lawsuit was filed on Aug. 30 by the American Civil Liberties Union on behalf of Planned Parenthood Northwest, Hawaii, Alaska, Indiana, Kentucky Inc., et al. It claims the new law protecting most unborn lives violates rights, privileges, and protections granted in the state’s constitution. In an Oct. 31 news release, Peter Breen, Vice President and Senior Counsel of the Thomas More Society, quoted from the brief. “Nothing in the language, history, or interpretation of the Indiana Constitution supports a right to abortion,” he said, “especially in light of Indiana’s prohibition of abortion going back to 1835, 16 years before the relevant part of that constitution was adopted.” The law in question was enacted by the Indiana General Assembly and signed into law by Gov. Eric Holcomb on Aug. 5. It bans most abortions except in cases of rape, incest, and specific medical conditions. “This law passes the constitutional litmus test,” said Breen. Following the lawsuit being filed, a preliminary injunction on the law was issued on Sept. 22, a week after the law went into effect. This action set the state law to its status prior to the ban, again allowing abortions in the state up to 22 weeks gestation.

WASHINGTON, D.C. (CNS) – A representative of the National Catholic Educational Association (NCEA) says Catholic schools have recovered more quickly from the pandemic than its public school counterparts. The successes, according to the NCEA, go across the board when looking separately at Black students, Hispanic students, students from low-income households, and students who qualify for free and reduced-price meals. The scores were first reported in October by the National Assessment of Educational Progress, colloquially known as “The Nation’s Report Card.” The numbers tracked the progress, or lack thereof, in math and reading by both fourth graders and eighth graders.

While Catholic schools’ scores are generally better than those of their public-school counterparts – Annie Smith, NCEA Vice President of Data and Research, said eighth graders pre-COVID-19 were about 5 percent better in math and 6 percent better in reading – the new numbers, based on testing conducted in 2021, showed a wider separation between the two. Catholic schools’ scores have pretty much bounced back to the levels they had achieved prior to the coronavirus pandemic’s onset in March of 2020. The only area that is still not up to snuff is eighth-grade math, which is still five points behind pre-pandemic levels. Even so, said NCEA President Lincoln Snyder, those numbers are 15 points ahead of the comparable figures reported by public schools. “It wasn’t a surprise to me at all,” Snyder told Catholic News Service in an Oct. 28 phone interview. “We’ve been monitoring testing data, really, throughout COVID.”

BAN MAI NAI SOI REFUGEE CAMP, Thailand (CNS) – Some 90,000 Myanmarese refugees live in nine camps on the Thai side of the border. At the height of displacement in the early 1990s, the camps held more than 130,000 refugees. People already in the camps have watched humanitarian groups come and go over the years, though in recent times, aid workers have mostly moved on to newer crises, leaving a chronic shortage of assistance for the refugees. What hasn’t declined is the commitment of the Catholic Church to accompany people in the camps. Father Dominic Nyareh, a Burmese priest who serves as chaplain in Ban Mai Nai Soi, was appointed to his post by the bishop of Loikaw in 2008. He’s one of five priests assigned by the Myanmar Church as chaplains in the camps. Thai officials won’t allow Father Nyareh to live in the camp, which is guarded by Thai soldiers, so he commutes every day from nearby Mae Hong Son. Another priest, Father Joseph Sureh, joined him in 2015, but he lives inside the camp. Thai officials won’t allow him to leave it. Two Burmese nuns also serve Ban Mai Nai Soi. Together, the pastoral team provides leadership to four churches within the camp, with a full gamut of parish activities, from men’s retreats to a youth group to flute classes for children. Whatever happens in the camps, the Church workers say they’ll stay as long as their bishop wants them to be present.

VATICAN CITY (CNS) – Pope Francis has continued to call on Russian and Ukrainian leaders to negotiate an end to the war, but the head of the Ukrainian Catholic Church told him Russia wants only the destruction of Ukraine. Ukrainian Archbishop Sviatoslav Shevchuk of Kyiv-Halych met Pope Francis on Nov. 7 at the Vatican, the first time the two have met in person since Russia started the war in late February, although they have spoken on the phone many times. Archbishop Shevchuk gave the pope “a fragment of a Russian mine that destroyed the facade of the Ukrainian Catholic church building in the town of Irpin, near Kyiv, in March,” the archbishop’s office said. “It is a very symbolic gift, not only because Irpin was one of the first ‘martyr towns’ affected by the Russian aggression against Ukraine, but also because similar pieces of landmines are extracted from the bodies of Ukrainian soldiers, civilians, and children, a visible sign of the destruction and death that war brings every day.” Returning to the Vatican from Bahrain on Nov. 6, Pope Francis had told reporters traveling with him that the Vatican is “constantly attentive” to what is happening in Ukraine and that the Secretariat of State continues to do what is possible and has worked behind the scenes to help arrange prisoner exchanges. The pope also told reporters he thinks the cruelty of the attacks on Ukraine and its civilians is the work of mercenaries, not Russians, who are “a great people” and have a strong “humanism.” 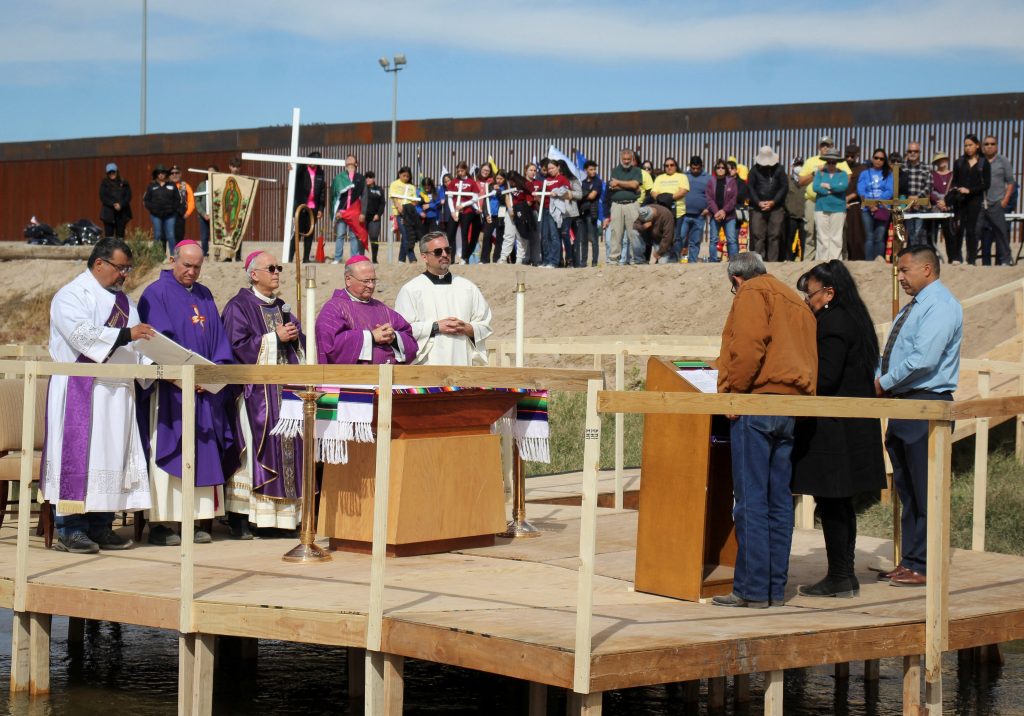 Bishop Mark J. Seitz of El Paso, Texas, center, and other Catholic clergy from Ciudad Juárez, Mexico, and El Paso take part in a binational Mass Nov. 5, 2022, in memory of migrants who died during their journey to the U.S. near the border between Mexico and the United States. (CNS photo/Gabriel Barraza, Reuters) EDITOR’S NOTE: NO RESALES. NO ARCHIVES. MUST DISCARD 30 DAYS AFTER DOWNLOAD.