With euthanasia in New Zealand, ‘we are about to cross a Rubicon’

WELLINGTON, New Zealand (CNS) — A prominent adviser to New Zealand’s bishops expressed dismay that voters approved euthanasia for terminally ill patients. “Many people will no doubt see the option of an assisted death as akin to adding another food choice to an already existing cafe menu when, in fact, the change represents a shift in the whole dining experience that will affect everything on the menu, as well as the service you get,” said John Kleinsman, director of the Nathaniel Centre for Bioethics, the New Zealand Catholic bioethics center. “Overseas research clearly shows that eligible people primarily choose euthanasia not because of intractable pain but for existential and social reasons,” he said in a statement released Oct. 30 by the New Zealand bishops’ conference. “That disturbs me and many others.” More than 65% of New Zealanders approved the Life Choice Act, which will take effect in 12 months. For a person to receive assistance in dying, she or he must be a citizen or permanent resident, age 18 or older; have a terminal illness with a probability of dying within six months; be experiencing unbearable suffering; and be competent to make a decision. Doctors will perform the assessment.

Corruption in the Church must be stamped out continually, pope says

VATICAN CITY (CNS) —- Corruption is an “ancient evil” that continues to plague the Catholic Church in different ways, Pope Francis said. In an interview with the Italian news agency Adnkronos, published Oct. 30, the pope discussed his thoughts on several issues, including the nature of corruption given recent allegations of financial malfeasance involving the Vatican. Despite past and present efforts to root it out, the pope said, “unfortunately, corruption is a cyclical story that repeats itself” until “someone comes along to clean and tidy up. But then it starts again, waiting for someone else to come along to put an end to this degradation,” he said. Money, as the early fathers of the Church and St. Francis called it, is “the devil’s dung.” In the interview, which was conducted Oct. 27, the pope said that while “the Church is and remains strong, the issue of corruption is a profound problem.”

WASHINGTON (CNS) — The feast of All Souls’ Day, when Catholics remembered and prayed for the dead, had weighted significance this year when so many have died of COVID-19 and the pandemic’s restrictions have prevented usual funeral services and final goodbyes in person. As of Oct. 29, about 228,000 people in the United States alone have died of COVID-19. As that number continues to rise, it is no surprise that on All Souls’ Day, Nov. 2, many parishes and dioceses remembered these deaths with Masses, prayers or special altars. Conversely, because of pandemic restrictions, some dioceses also had to cancel, or at least modify or livestream, their usual All Souls’ Day commemorations often held at Catholic cemeteries. In the Los Angeles archdiocese, scaled back All Souls’ Day plans continued and included, as in previous years, aspects of the Mexican celebration Día de los Muertos, or Day of the Dead, celebrated Nov. 1-2. A vigil prayer service was celebrated by Los Angeles Archbishop José H. Gomez on the evening of Nov. 1 in the outdoor courtyard of the Mausoleum of Calvary Cemetery and Mortuary in Los Angeles.

CHARLOTTE, N.C. (CNS) — Police were investigating recent thefts of pro-life signs from four parish churches and two schools in the Diocese of Charlotte. St. Vincent de Paul and St. Ann churches in Charlotte, St. Mark Church in Huntersville and St. Paul the Apostle Church in Greensboro reported that pro-life signs erected for Respect Life Month, observed every October, and the upcoming elections have been stolen or vandalized. Similar signs at Holy Trinity Middle School and Charlotte Catholic High School also were stolen. This type of vandalism has been reported elsewhere in the country. In Louisiana, yard signs and larger banners promoting a pro-life measure on the Nov. 3 ballot in that state were stolen in New Orleans and at least four other cities. In Texas in early October, a pro-life display at the University of North Texas was vandalized, according to Texas Right to Life. Pro-life students at the university had permission to place 1,000 flags on campus as a memorial to represent preborn babies killed by abortion, but dozens of the flags were ripped out of the ground or stolen.

VATICAN CITY (CNS) — Pope Francis advanced the sainthood causes of five men and four women, including four 20th-century martyrs killed in Brazil, Turkey and Italy. The pope signed the decrees Oct. 27 during a meeting with Cardinal-designate Marcello Semeraro, prefect of the Congregation for Saints’ Causes. The Vatican published the decrees Oct. 28. The pope recognized the martyrdom of Capuchin Fathers Leonard Melki and Thomas Saleh, Lebanese friars who served as missionaries in Turkey, where they were arrested, tortured and murdered during the harsh repression by the Ottoman Turks. Father Melki was killed in 1915 together with Blessed Ignace Maloyan, an Armenian bishop, and hundreds of others. Father Saleh was condemned to death for offering hospitality to an Armenian priest during the genocide. He died in 1917 during a military escort as he was being deported in the middle of winter. The pope also recognized the martyrdom of Father Luigi Lenzini, who was killed in July 1945, just months after World War II ended, by four political extremists in central Italy. While the priest had helped the partisans during the war, he had received death threats for being outspoken against the communist movements gaining momentum in the region.

WASHINGTON (CNS) — While the annual March for Life in Washington is still scheduled for Jan. 29, the cross-country bus pilgrimages that have been at the heart of the event for decades are being decimated by the COVID-19 pandemic. Local events are being announced in lieu of the pilgrimages. Among the cancellations announced so far are pilgrimages sponsored by the Diocese of Buffalo, New York, the Diocese of Fort Wayne-South Bend, Indiana, the Archdiocese of Omaha, Nebraska, and the Archdiocese of St. Paul and Minneapolis. Each of them typically brings 200 or more marchers for visits of at least three days, reserving large blocks of hotel rooms. “We did not come by this decision lightly,” the Buffalo diocese said in a statement. “With the uncertain and ever-changing regulations due to COVID-19, bus capacity restrictions and traveling through other states, all to converge with other states around the country, we have decided it is in the best interest of all involved to make their own personal decisions and arrangements.” 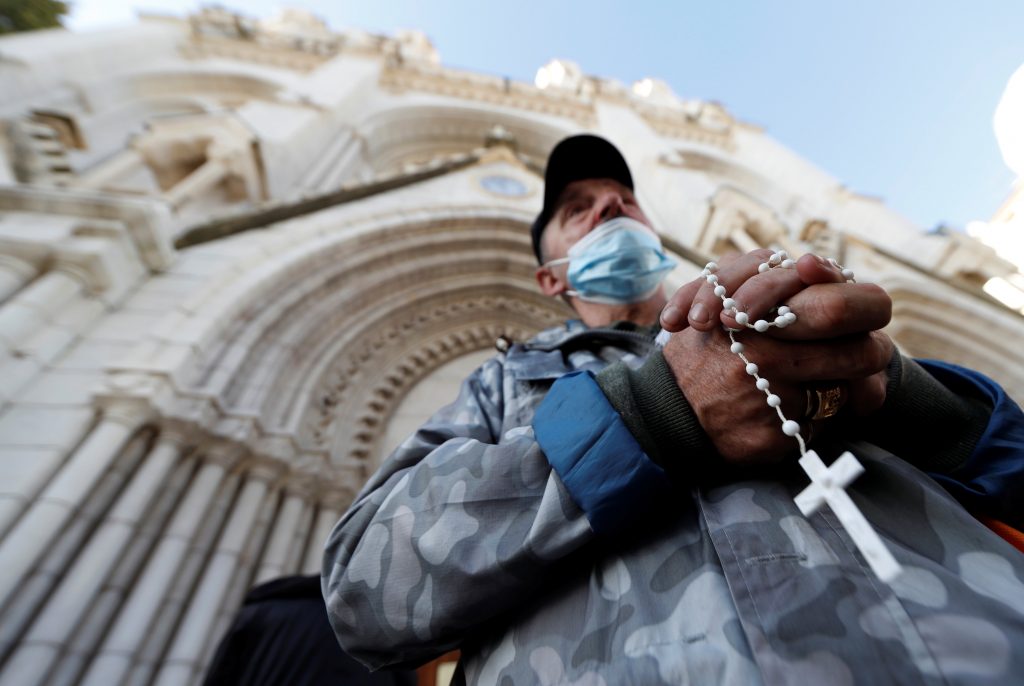 A man prays with a rosary outside Notre Dame Basilica in Nice, France, Oct. 30, 2020, the day after three people were stabbed to death inside. (CNS photo/Eric Gaillard, Reuters)