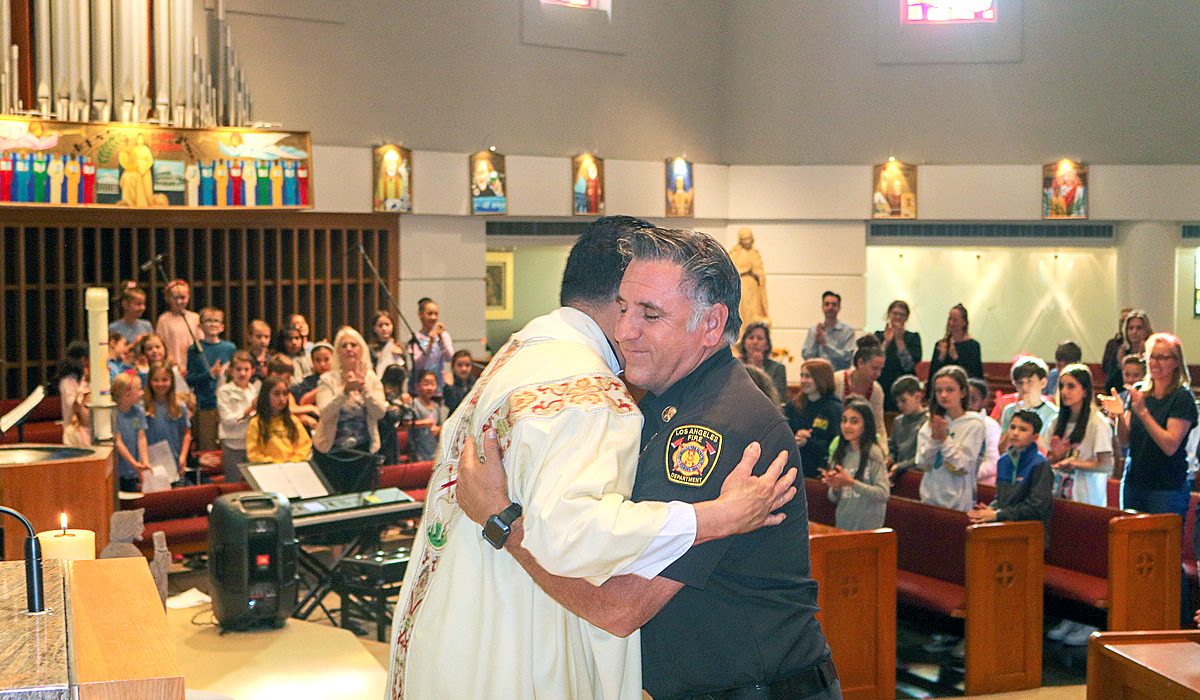 Report: Persecution of Christians worse in Asia; Mideast might not recover

LONDON (CNS) — Christianity is disappearing from towns and cities in parts of the Middle East, warns a new report from the papal foundation Aid to the Church in Need. It also said that persecution of Christians “has worsened the most” in South and East Asia. Urgent action by the international community is needed to prevent more Christians fleeing countries, including Iraq and Syria, said the Oct. 23 report, “Persecuted and Forgotten?” It was based on a 2017-19 study of the persecution of Christians around the world. “Each person who leaves makes it harder for those left behind,” it said. While noting that the international community has shown unprecedented concern about the persecution of Christians in the Middle East, the organization said “governments in the West and the U.N. failed to offer Christians in countries such as Iraq and Syria the emergency help they needed as genocide got underway.” In parts of Africa, “Islamist violence is putting huge pressure on Christians,” Aid to the Church in Need said.

WASHINGTON (CNS) — The Trump administration Nov. 1 announced a proposed rule to allow faith-based adoption and foster care agencies to follow their deeply held religious beliefs and not place children with same-sex couples. Under the proposal, announced by the U.S. Department of Health and Human Services, these agencies would not be excluded from certain federally funded programs for adhering to their belief in traditional marriage. The chairmen of the U.S. bishops’ committees on domestic policy, defense of marriage and religious liberty welcomed the move that would overturn an Obama administration rule. “We commend the administration for acting to change a 2016 regulation that threatened to shut out faith-based social service providers, namely adoption and foster care agencies that respect a child’s right to a mother and a father,” the bishops said in a Nov. 1 statement. “To restrict faith-based organizations’ work by infringing on religious freedom — as the 2016 rule threatened to do — is unfair and serves no one, especially the children in need of these services,” they said.

Bishop Richard Lennon dies at 72; was 10th bishop of Cleveland

CLEVELAND (CNS) — Bishop Richard G. Lennon, 72, whose time as the 10th bishop of Cleveland was marked by a commitment to evangelization with an emphasis on the Gospel, died Oct. 29 following a prolonged illness. He was granted early retirement Dec. 28, 2016, by Pope Francis. Bishop Nelson J. Perez of Cleveland recalled Bishop Lennon as a man with great love for the Catholic Church. “In his service to the diocese, Bishop Lennon showed a deep dedication to the faithful governance of the diocese and a tremendous love of the church and the people he shepherded,” Bishop Perez said in a statement. “May the Lord grant him eternal rest.” Bishop Lennon’s wake began with afternoon vespers Nov. 4 in the Cathedral of St. John the Evangelist. Bishop Perez was the presider and the homilist. The wake continued until 7 p.m. The bishop’s body lay in repose the morning of Nov. 5 in the cathedral, prior to the funeral Mass. Interment was in the cathedral’s Resurrection Chapel. Bishop Lennon was installed in the Cleveland Diocese April 4, 2006, following the retirement of Bishop Anthony M. Pilla. Prior to his appointment to Cleveland by Pope Benedict XVI, he was an auxiliary bishop in the Archdiocese of Boston, where he served as apostolic administrator for seven months beginning in December 2002 in the aftermath of the clergy sexual abuse crisis that emerged earlier that year.

WASHINGTON (CNS) — Kamila Kaminska, the Polish actress who played St. Faustina Kowalska in the new movie “Love and Mercy: Faustina,” read the diaries her fellow countrywoman wrote to help prepare for the role. “It was an amazing experience,” Kaminska, 31, told Catholic News Service during an Oct. 31 telephone interview from New York, having flown in from Poland to take part in one of the Oct. 28 showings of the movie at several hundred U.S. cinemas. “I was reading, I was listening to the audiobook of diaries. And my goal was before the starting the shooting, I had to read the diaries. Because it’s a message from her. It helped me know what I’m supposed to do in the movie,” Kaminska said. “I had a lot of spiritual experiences. Sometimes I was crying, sometimes I think that my life had to change, for example.” “Love and Mercy: Faustina” was made in both Polish and English, so it was like making two movies at the same time. But for Kaminska, she also was acting in another film that was shooting concurrently, and that character was “dark … a bad girl,” and the next day she had to play St. Faustina. “I think we can be thankful for Faustina that she gave that simple message: a simple message that we are loved.”

GUADALAJARA, Mexico (CNS) — A Mexican priest and migrant shelter operator suffered an extortion attempt and, later the same day, a violent robbery at his parish residence. It was another example of the violence impacting priests in Mexico and how migrant defenders are coming under attack. The robbery came amid a wave of assaults on parishes — often during Mass — in Mexico’s second-largest city. In a statement issued Oct. 24, the Migrant and Refugee Shelter in in the Guadalajara suburb of Tlaquepaque said shelter staff received a phone call that day, saying Father Alberto Ruiz Perez had been in an accident. The caller asked that money meant for construction at the shelter be given to an unnamed priest, who would come to collect it. There was no accident and “when Father Ruiz arrived, (the staff) realized there had been a robbery via false notification.” Later that night, after finishing duties in his parish, a couple arrived at the parish residence asking for “a religious service.” The male then pushed Father Ruiz, pulled a gun on him, and five other armed individuals stormed the residence, stealing personal items and approximately $1,050, according to the statement. 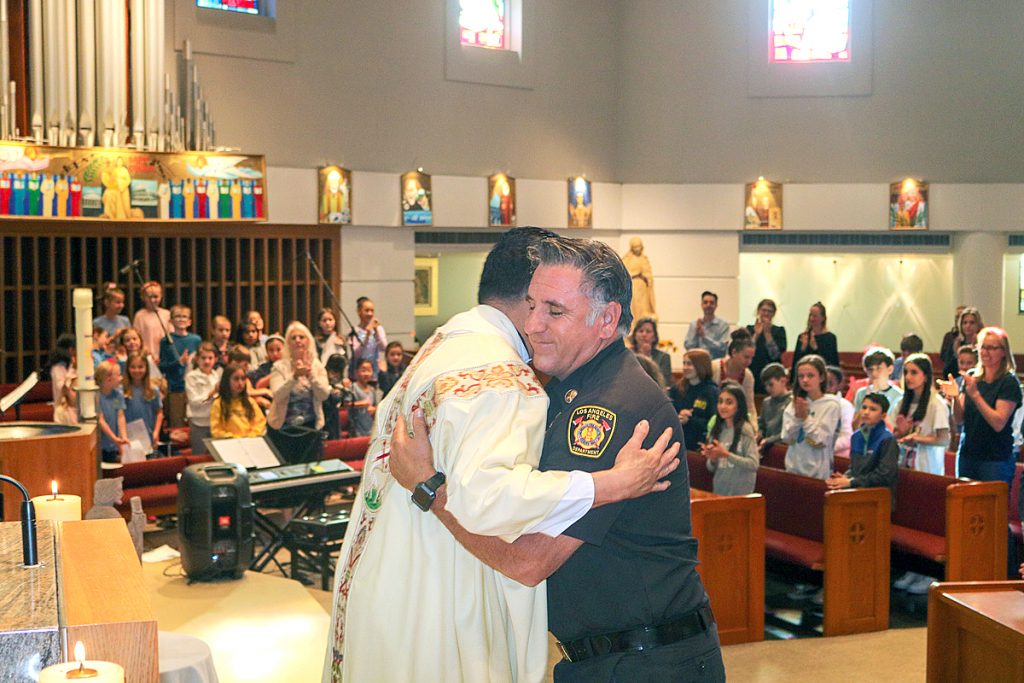 Father Paul Sustayta of St. Martin of Tours Church embraces Los Angeles Assistant Fire Chief Jaime Moore during All Saints’ Day Mass Nov. 1, 2019. The church, as well as many of the parishioners’ own homes, had been spared from the devastating Getty Fire due to the work of the firefighters. (CNS photo/Pablo Kay, The Angelus News)