PORTLAND, Ore. (CNS) — It took courage for Leilani Arellano to return to Mass, but she is glad to be back. Over the summer, Arellano had COVID-19 and she still cannot breathe quite right. The prospect of worshipping in a room full of people, even properly distanced and masked, made her uneasy. But Father John Henderson and the rest of the staff at St. Anthony Parish in Tigard, remained so consistent and open-hearted in their outreach during the pandemic and so fastidious and firm on the rules for returning to Mass that Arellano felt both wanted and safe. During each Mass at St. Anthony, in a suburb outside of Portland and one of the largest parishes in the state, Father Henderson and other priests thoroughly explain safety procedures and the safest technique for receiving Communion. “It was hard for me to come into Mass,” Arellano said. “But they have done a really good job for those who are panicked and scared as I was. It feels good to be in person, honestly. It feels a lot more grace-filled than sitting in front of a computer.” Father Henderson opted to accept the pandemic as an opportunity for conversion. He started with himself, asking how he could grow closer to the Lord during a time of fear and isolation. Then he prayed about the entire 3,600-family parish and its three big language groups: English, Spanish and Vietnamese. “I feel we have to come out of this with a kind of newness, a freshness,” he said.

OKLAHOMA CITY (CNS) — Oklahoma Gov. Kevin Stitt signed three bills restricting abortion into law April 26. The measures require physicians who perform abortions to be certified in obstetrics and gynecology, place performing an abortion on the list of unprofessional conduct by doctors and prohibit abortions if a fetal heartbeat can be detected. With the fetal-heartbeat bill, any doctor who performs an abortion after detecting a heartbeat would be guilty of homicide. “We are fortunate in Oklahoma to have political leaders who understand and seek to protect our most vulnerable from abortion, which claims the lives of unborn children and too often endangers their mothers as well,” said Archbishop Paul S. Coakley of Oklahoma City, in an April 26 statement. The archbishop called for “prayers for a renewed respect for the dignity of every human life” and for a rejection of the mentality that treats human beings as “disposable based merely on their usefulness, health, age or economic status. We must offer compassion and mercy to those in need,” he added.

VATICAN CITY (CNS) — Meditation is more than just a method of stress relief for the body, it is a way of encountering Christ in one’s soul, Pope Francis said. During his weekly general audience April 28, the pope said that although it has become a “widespread activity among people who do not have a religious view of life,” meditation within the context of Christian prayer guides men and women “to advance, with the Holy Spirit, along the one way of prayer: Christ Jesus. For us Christians, meditating is a way of encountering Jesus. And in this way, only in this way, can we find ourselves,” he said. Continuing his series of talks on prayer, the pope reflected on meditation as a form of prayer Christians use to “seek meaning” within the sacred mysteries and from God’s word. Meditation, however, is also practiced by non-believers as well “because it represents a high barrier against the daily stress and emptiness that is everywhere,” he noted.

FATIMA, Portugal (CNS) — Being an altar server should be a “profession of faith” to the entire parish community, Pope Francis told young men and women participating in Portugal’s annual altar server pilgrimage to Fatima. “Don’t follow negative people but radiate the light and hope that come from God,” he wrote in a message read May 1 as about 1,000 altar servers sat socially distanced outdoors at the Shrine of Our Lady of Fatima. “Be holy. Be original” was the theme for the altar servers’ 25th national pilgrimage and was the focus of Pope Francis’ message to the young people, which was reported on the website of the Portuguese bishops’ conference. The pope asked them to be particularly careful when serving at Mass to always behave in a way that “is fitting in the service of holy things,” especially when they are near the altar, but also when they make the sign of the cross, kneel or are joining in the prayers and hymns. “You have been taught — and it is true — that at holy Mass, that small piece of bread becomes the body of Christ and the wine in the chalice becomes the blood of Christ,” he said. When serving at the altar, “your eyes do not see Jesus, but your heart and your lips adore Him.”

Irish government to lift ban on Mass attendance May 10

DUBLIN (CNS) — The Irish government said a COVID-19-related ban on Catholics attending Mass will be lifted May 10. Irish Prime Minister Micheál Martin made the announcement in an address to the nation April 29 as he revealed a new road map for the reopening of society. Public worship has been banned since Dec. 26 amid increased cases — a move accepted by the Irish bishops’ conference and other faith leaders. However, the government provoked controversy earlier in April when Health Minister Stephen Donnelly made it a criminal offense for a priest to plan a public Mass or a Catholic to leave home to participate in Mass. Archbishop Eamon Martin of Armagh, Northern Ireland, head of the Irish bishops’ conference, described this move as both “provocative” and “draconian.” The prime minister announced in a televised address that up to 50 people will be permitted to attend Mass beginning May 10. Up to 50 people will also be able to gather for funerals and wedding ceremonies; however wedding receptions will be restricted to just six people, or 15 people if the reception takes place outdoors.

VATICAN CITY (CNS) — Charity and fraternity in one’s family and community is the first step in helping establish the kingdom of God in a world that is increasingly divided, Pope Francis said. Meeting with members of the Chemin Neuf community April 30, the pope said the group’s “ecumenical openness” in welcoming different cultures and traditions can “transform the face of our society. I encourage you not to be afraid to walk the paths of fraternity and to build bridges between people in a world where so many walls are still being built out of fear of others,” he said. Founded by a charismatic prayer group in 1973, the Chemin Neuf community boasts an estimated 2,400 members in 30 countries, according to its website. Praising its work with laypeople and religious men and women, as well as young people, the pope said the group’s work is a service for the common good that helps build “a more just and fraternal world.” 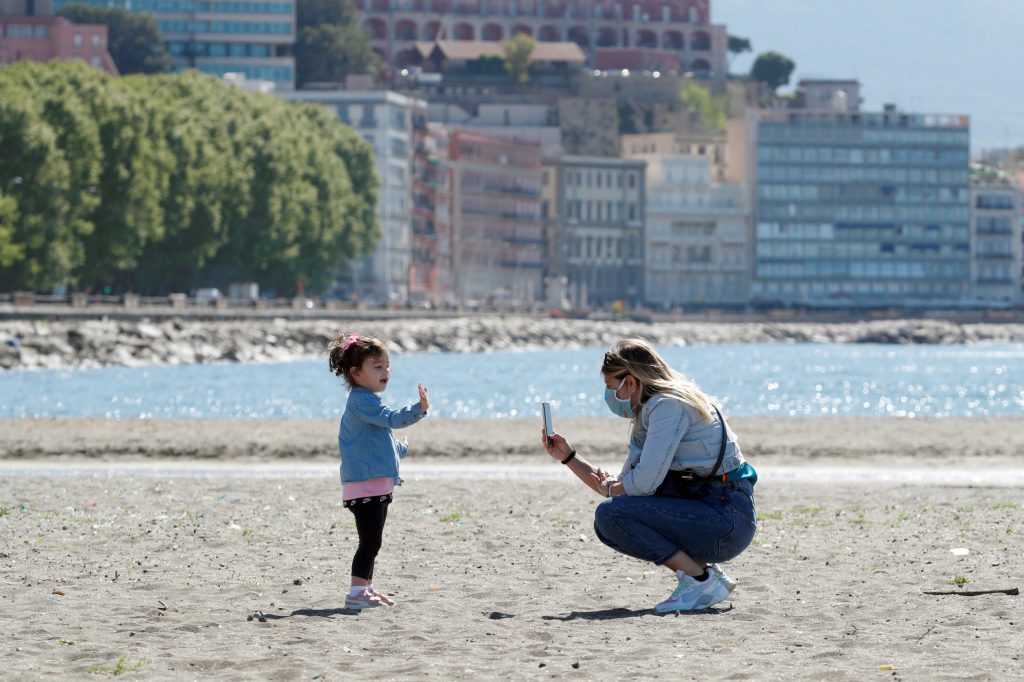 A woman and a child are seen at the beach in Naples, Italy, in this May 4, 2020, file photo. Pope Francis is scheduled to open a May 14 meeting discussing the challenges posed by Italy’s low birth rate. (CNS photo/Ciro De Luca, Reuters)