WASHINGTON, D.C. (CNS) – Catholic leaders were thankful that death-row inmate Melissa Lucio was granted a last-minute stay of execution on April 25, but they also said her sentence shows a failure in the use of capital punishment in this country and stressed that they would continue to pray for Lucio and her family and advocate on her behalf. Lucio, 53, a Catholic mother of 14 and a grandmother, was scheduled for execution on April 27 for the 2007 death of her 2-year-old daughter, Mariah, that Lucio has maintained was due to her daughter’s accidental fall down a stairwell. The Texas Court of Criminal Appeals, which issued a stay of execution, ordered the 138th Judicial District Court of Cameron County to consider the new evidence presented by Lucio’s legal team. Lucio will remain on death row while her case goes back to trial court to examine new evidence her attorneys say shows that the toddler’s death was an accident caused by an undiagnosed injury sustained after falling down the stairs two days before she died. “I am grateful the court has given me the chance to live and prove my innocence. Mariah is in my heart today and always,” Lucio said in a statement through her attorneys. “I am grateful to have more days to be a mother to my children and a grandmother to my grandchildren.” Lucio heard the news of the stopped execution in a phone call with state Rep. Jeff Leach, a Republican, and began sobbing when she heard it, attorneys told reporters in an April 25 Zoom call.

WASHINGTON, D.C. (CNS) – A federal judge at an April 25 hearing said he would grant the requests of three states to force the federal government to keep in place a public-health order at the U.S.-Mexico border that has increased the number of expulsions of immigrants trying to cross into the United States. The public-health order, known as Title 42, allows the United States to bar entry of persons who have recently been in a country where a communicable disease was present. It was applied by the Trump administration in March 2020, soon after the coronavirus pandemic was declared by the World Health Organization. U.S. District Judge Robert R. Summerhays of the Western District of Louisiana, an appointee of former President Donald Trump, said he would sign an order to keep the policy in place, and to order the federal government to certify that it is not acting ahead of its announced May 23 date to drop the Title 42 provision. The Biden administration has come under fire from both Republicans and Democrats for planning to end the policy. The Centers for Disease Control and Protection announced in April that the restriction could be dropped in late May. Catholic groups that support immigrants have long been calling for an end to this restriction. Since Title 42 was applied at the border, 1.61 million people have been expelled by the United States through January, the latest month for which statistics are available. The vast majority, 1.56 million, were expelled by the U.S. Border Patrol, while 52,735 were expelled by the Office of Field Operations.

MARIENBERG, Cameroon (CNS) – Battered by a separatist war to the west, a Boko Haram insurgency to the north and the influx of Central African refugees to the east, Cameroon is a country in crisis. And with no end in sight, Catholics in Cameroon turned to Mary to intercede for them. From April 23-24, more than 1,200 Catholics gathered around their bishops at the pilgrimage site in Marienberg, about 115 miles from the country’s capital, Yaoundé. They were there to reconsecrate Cameroon to the Immaculate Heart of Mary, 12 decades after the German Pallottine Fathers consecrated the country to Mary in a move now considered by Cameroon’s Catholics as the very foundations of Catholicism in the country. “The presence of all these Christians testifies to the importance that Mary occupies in their life of faith, but also to the thirst for peace that inhabits the Cameroonian people. We should therefore ask God for this peace, but also do everything necessary at our level to maintain it, because peace is a grace, but also a personal effort. And this undoubtedly involves acquiring a quality of God which must also become ours: mercy,” said Bishop Abraham Bouala Kome, president of the Cameroonian bishops’ conference. “Peace is what is normal; when peace is absent, we are in something abnormal, and we must always look for what is normal,” he said.

HYATTSVILLE, Md. (CNS) – Longtime pro-life advocate Deirdre McQuade, who for more than a decade shared perspectives of U.S. bishops’ and the Catholic Church’s teaching on the sanctity of life, died on April 21 after a bout with metastatic breast cancer. She was 53. From 2005 to 2018, the time she was Assistant Director for Pro-Life Communications at the U.S. Conference of Catholic Bishops, McQuade was interviewed by various media and spoke at numerous events, offering views on palliative care, abortion and alternatives to physician-assisted suicide. Friends recalled McQuade as someone whose strong faith helped her staunchly uphold the value of human dignity in her work. “She was very serious about her faith and incorporating faith in life,” said Dawn Eden Goldstein, an author and theologian, who met McQuade in 2007 and became close friends with her over the years. Goldstein recalled McQuade as an advocate for a consistent ethic of life in both her professional and personal life and said her values were reflected when she chose Sister Thea Bowman, a candidate for sainthood who was the first African American member of the Franciscan Sisters of Perpetual Adoration, as her patron. Years-long friend Colin O’Brien described McQuade’s rich sense of warmth, friendship and hospitality, which led to her “really being there for other people.”

VATICAN CITY (CNS) – Superiors of women’s religious orders from around the world gathered in Rome or online to look at their areas of vulnerability and find ways to “embrace” them so that together they are stronger and can be signs of hope for other vulnerable individuals and communities in the world, said Claretian Sister Jolanta Kafka. “We have often placed ourselves on the side of the needy, but from a position of power,” said Sister Kafka, president of the International Union of Superiors General. The challenge is “to recognize more consciously that we too need compassion, mercy, conversion, to be aware of our wounds, our sins.” Nearly 700 superiors general – 520 attending in person – participated in the UISG plenary assembly from May 2-6 in Rome under the theme, “Embracing Vulnerability on the Synodal Journey.” Sister Kafka and other leaders of the organization previewed the assembly on April 29 for journalists in the Vatican press office. As the sisters acknowledge their vulnerabilities, she said, “we feel the need for a new reading of the essentials of religious life and of the evangelical counsels” of poverty, chastity and obedience and how leadership and authority can be exercised in a more “evangelical, synodal spirit.”

VATICAN CITY (CNS) – Families play an important role in a society’s development when ideologies are not imposed upon them, Pope Francis said. The family is the “primary planter of the tree of gratuitousness,” and when civilization “uproots” that gift, “its decline becomes unstoppable,” the pope said on April 29. “I believe that there are certain conditions for rediscovering the beauty of the family. The first is to remove from the mind’s eye the ‘cataract’ of ideologies that prevent us from seeing reality,” he said. Pope Francis addressed members of the Pontifical Academy of Social Sciences, who were holding a plenary meeting from April 27-29 at the Vatican on the role of the family and “the challenge of love.” The family is “almost always at the top of the scale of values” for people around the world, the pope said, because “it is inscribed in the very nature of woman and man.” 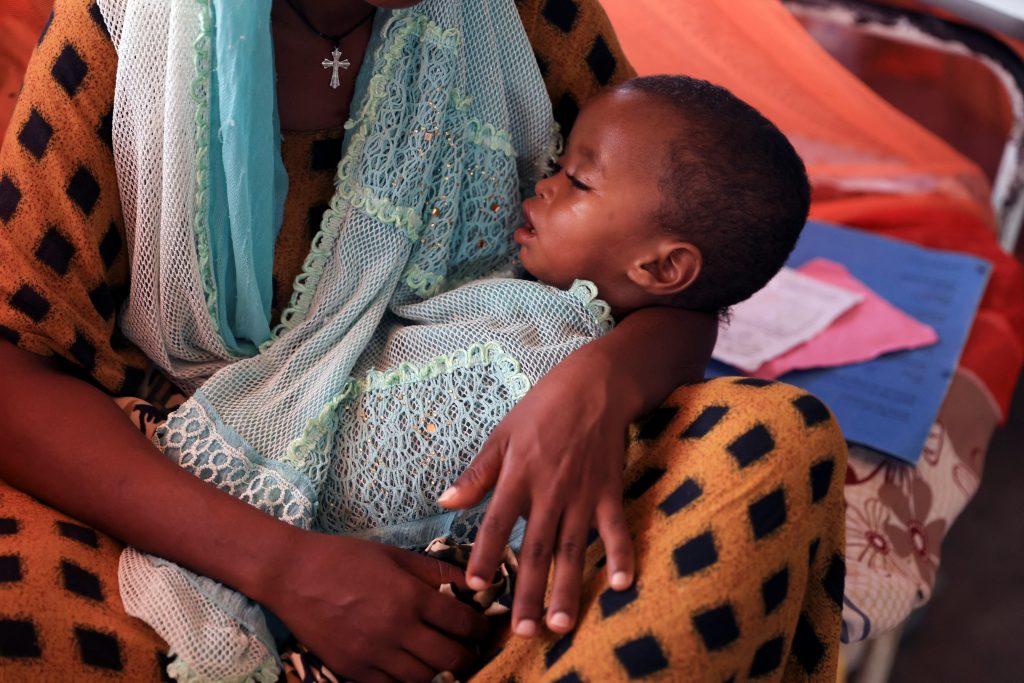 A malnourished child is held by his mother at a camp for people displaced by drought in Gode, Ethiopia, April 26, 2022. The United Nations reports Ethiopia’s eastern Somali region has been hit by three consecutive below-average rainy seasons, worsening the already deteriorating humanitarian situation for more than 3 million people, more than half the local population. (CNS photo/Tiksa Negeri, Reuters)