TAPACHULA, Mexico (CNS) — Pope Francis has donated $500,000 to assist migrants attempting to travel through Mexico, but who are increasingly being impeded by Mexican officials from reaching the U.S. border. Those migrants who travel the length of Mexico are also being impeded in their attempts to apply for asylum in the United States and remain in precarious conditions south of the border. The donation “will be distributed among 27 projects in 16 dioceses and Mexican religious congregations that have asked for help to continue providing housing, food and basic necessities to these brothers and sisters,” the Vatican charity Peter’s Pence said in an April 27 statement. The Vatican already approved projects run by seven dioceses and three religious congregations: the Scalabrinians, the Sacred Hearts of Jesus and Mary and the Hermanas Josefinas. The donation comes as the crush of migrants arriving at the U.S. border reaches levels not seen in more than a decade. Mexico’s Catholic Church has helped the migrants with little cooperation from the various levels of government. Priests who work on immigration matters say the federal government has yet to outline a policy or offer a proper response, while state and local governments prefer not spend money on migrants.

VATICAN CITY (CNS) — In back-to-back audiences with a group of French young people and an Italian association for deaf people, Pope Francis cited personal example and witness as a vital piece in the Church’s evangelization mission. Meeting with young people from the Diocese of Aire et Dax in southwestern France April 25, the pope encouraged them to remain united with Christ through the sacraments and the example of the saints so that they can spread the message that “God wants to give to the world through your lives. Yes, let yourselves be transformed and renewed by the Holy Spirit to bring Christ to every environment and give witness to the joy and youthfulness of the Gospel,” he said. The pope told the young men and women their pilgrimage to Rome was an opportunity to reflect on the lives of the martyrs who remained faithful to Christ until the end. The martyrs’ example, he added, is important now more than ever “because many people today think it is more difficult to call themselves Christians and live their faith in Christ.”

PHILADELPHIA (CNS) — The U.S. Court of Appeals for the 3rd Circuit ruled April 22 that the city of Philadelphia can bar Catholic Social Services of the Archdiocese of Philadelphia from placing children in foster care with any family because the Catholic agency upholds traditional marriage. “This ruling is devastating to the hundreds of foster children who have been waiting for a family and to the dozens of parents working with Catholic Social Services who have been waiting to foster a child,” said Lori Windham, senior counsel at Becket, which is representing CCS and several foster parents who have sued the city. “We’re disappointed that the court decided to let the city place politics above the needs of kids and the rights of parents, but we will continue this fight,” Windham said. In March 2018, Philadelphia’s Department of Human Services froze all new foster care placements with the archdiocese’s Catholic Social Services. At issue is a long-standing practice of CSS not to perform evaluations of the homes of same-sex couples wishing to care for foster children and instead to refer the required process to one of seven other foster agencies contracted by the city’s Department of Human Services. On average, the Catholic agency was serving 127 foster children a day placed with more than 100 families in the city.

WASHINGTON (CNS) — In a unanimous ruling April 19, a three-judge panel of the U.S. Court of Appeals for the District of Columbia Circuit upheld the long-standing requirement of the House of Representatives that it open each day it is in session with a prayer. The decision from Judges David Tatel, Douglas Ginsburg and Harry Edwards also confirmed that the U.S. House chaplain, Jesuit Father Patrick Conroy, can reject a secular invocation to open the sessions. “Since 1789, the House of Representatives has begun each legislative day with a prayer,” said the court’s opinion, which was filed by Tatel. Although a House-appointed chaplain has traditionally delivered the opening prayer, some time ago the House began allowing members to nominate other individuals to give a prayer as “guest chaplain.” As the opinion explained, this current case arose when a House member asked Father Conroy to invite Daniel Barker, a former Christian minister who is now an atheist, to be guest chaplain and deliver a secular invocation. Barker is co-president of the Freedom From Religion Foundation, a nonprofit that promotes nonbelief and “works to keep state and church separate.” The priest denied the request and Barker sued in 2016, claiming that he was being “unconstitutionally excluded” from the guest chaplain program because he is an atheist. Barker cited the Establishment Clause of the First Amendment — which says Congress “shall make no law respecting an establishment of religion, or prohibiting the free exercise thereof.”

VATICAN CITY (CNS) — Visiting Romania May 31-June 2, Pope Francis will stop at six destinations, including a popular Marian shrine in Transylvania. He also will beatify seven bishop-martyrs of the Eastern-rite Romanian Catholic Church, who died during a fierce anti-religious campaign waged under the communist regime. His visit to the predominately Orthodox country will be his 30th foreign trip after visiting Bulgaria and North Macedonia in early May. The trip will include visits to the Romanian Orthodox and Roman Catholic cathedrals, celebration of a Latin-rite Mass and an Eastern-rite Divine Liturgy, as well as separate meetings with political leaders, young people and families as well as members of the Roma community. He will visit the capital, Bucharest, the cities of Bacau, Iasi, Sibiu, Blaj and the Marian shrine in Sumuleu Ciuc, an important place of pilgrimage for Hungarian Catholics, especially on Pentecost, which is June 9.

LAGOS, Nigeria (CNS) — Several Catholic bishops appealed to the Nigerian government to expedite actions that will lead to the release of Leah Sharibu and other girls held captive by Boko Haram insurgents. In their Easter messages, the bishops also urged the government to end the incessant and wanton killings of fellow citizens in the country; no one has the right to kill another person, they added. Bishop Hilary Okeke of Nnewi said there was a ray of hope regarding the fate of the abducted girls and that Nigeria’s bishops “are not relenting” in their efforts to recover them from their captivity. Leah, 15, was taken hostage with more than 100 girls in the town of Dapchi early last year, in the largest mass abduction since Boko Haram took 220 girls from the town of Chibok in 2014. When the others were freed a month later, she was the only one not released — reportedly because she refused to renounce her Christian faith. About 120 Chibok girls are still in captivity. The bishops’ conference has formally involved Pope Francis, and the Vatican might have reached out to President Muhammadu Buhari on the issue, Bishop Okeke said. Bishop Okeke said he thought the government was doing the best it could to stem the rising conflict in Nigeria and killings by ethnic Fulani herders. He said the killings started before Buhari’s election in 2015 and might continue beyond his presidency because the herders seem to appreciate their cows more than humans. 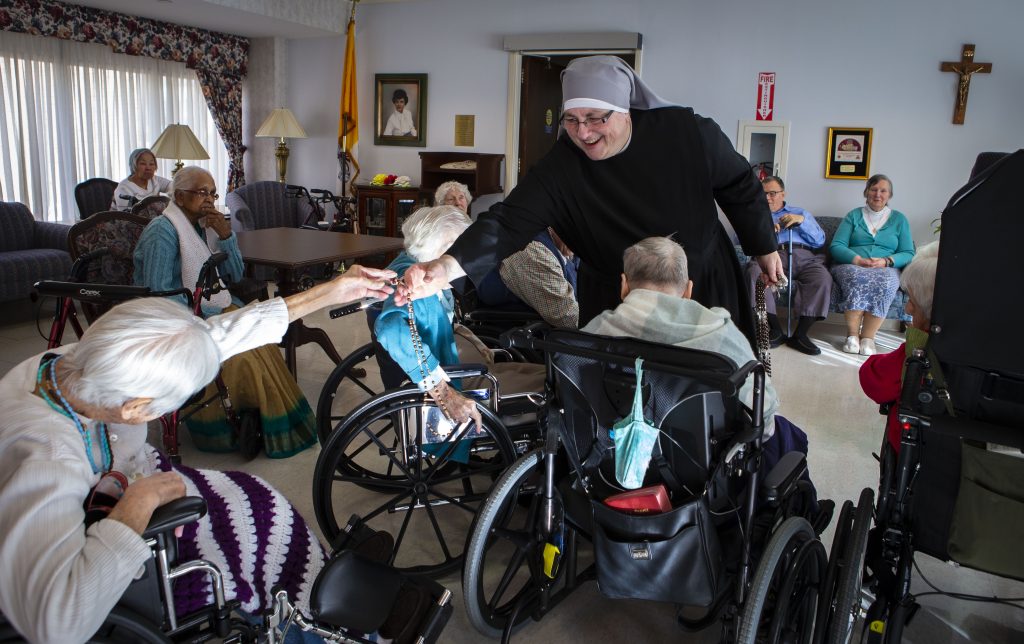 Sister Constance Veit, a Little Sister of the Poor, collects rosaries from elderly residents following prayers at the Jeanne Jugan Residence for senior care in Washington March 25, 2019. Sister Constance is considered a spiritual mother by many of the residents, who said they will honor her on Mother’s Day. (CNS photo/Chaz Muth)