VATICAN CITY (CNS) — Nations of the world must work together to solve the key global crises of migration and climate change, which are questions of justice that can no longer be ignored, Pope Francis told diplomats. “In the development of a global consensus capable of responding to these ethical challenges facing our human family, your work as diplomats is of paramount importance,” he said. The pope’s comments came May 21 in a speech to new ambassadors to the Vatican from Singapore, Zimbabwe, Bangladesh, Algeria, Sri Lanka, Barbados, Sweden, Finland and Nepal. Speaking to the group of diplomats, the pope recognized the difficulties involved in traveling during the ongoing pandemic and thanked them for being able to attend the meeting in person. The COVID-19 pandemic has made people more aware of how interdependent everyone is and of “our need to be attentive to the poor and the vulnerable in our midst,” the pope said.

ROME (CNS) — While the current cease-fire between Israel and Hamas brings a much-needed halt to violence in the Holy Land, true peace can only be achieved if both sides are recognized as equals, said the Palestinian ambassador to the Holy See. Ambassador Issa Kassissieh, speaking to Catholic News Service May 21 from his home in Jerusalem, said the road to peace begins with returning to a two-state solution within the borders established before 1967. However, the establishment of Israeli settlements in Palestinian territories and the “Israeli occupation” must end, he said. “We need a road map to reengage, with the support of the international community and through the Quartet (the United Nations, United States, European Union and Russia) for real and substantive talks between both sides, to reach — within a timeframe — the endgame. And the endgame here is carrying out the relevant U.N. Security Council resolutions as well as U.N. General Assembly resolutions with regard to the Palestinian question,” he said. The issue of Israel establishing settlements in Palestinian territories has long been an impediment to the peace process. The West Bank, which along with the Gaza Strip was captured by Israel in 1967, forms part of the area offered to Palestine by the U.N. for the establishment of a prospective state.

VATICAN CITY (CNS) — The annual diocesan celebration of World Youth Day is an important event that emphasizes the role young people play in the Catholic Church, the Vatican said. In a document published by the Dicastery for Laity, the Family and Life May 18, the Vatican issued a set of pastoral guidelines for local WYD celebrations “to ensure that younger generations feel that they are at the center of the church’s attention and pastoral concern. The celebration of these youth days at a local level is therefore extremely useful in keeping the church mindful of the importance of walking with young people and of welcoming them and listening to them with patience while proclaiming the word of God to them with affection and power,” it stated. The document was signed by Cardinal Kevin Farrell, dicastery prefect, and Schonstatt Father Alexandre Awi Mello, dicastery secretary. Divided into six chapters, it said local celebrations offer young people “a personal experience of a ‘festival of faith,’” which is especially important for those who cannot attend the international event “because of studies, work or financial difficulties.” World Youth Day is celebrated annually on a local level and every two or three years with an international gathering with the pope. In November, Pope Francis moved the local celebrations of World Youth Day from Palm Sunday to the feast of Christ the King.

WASHINGTON (CNS) — The same day the U.S. Supreme Court announced it will hear a Mississippi appeal of a lower court’s decision to strike down the state’s 15-week abortion ban, it dismissed suits against a Trump administration Title X policy. That policy enforced an existing Title X ban on family planning funds being used for abortion or abortion referrals. May 17 also was the final day for public comment on the Biden administration’s proposed rule to end the Trump policy known as the “Protect Life Rule.” Under the Biden proposal, Title X funds could again be used by health care services for low-income patients to perform abortions or to refer patients to abortion providers. A May 3 letter to the court from the Office of the Solicitor General said the U.S. Department of Health and Human Services expects to announce the final Title X rule in December. According to representatives of pro-life groups, this revision process has been rushed and the new rule as proposed would obliterate conscience rights. They made the comments at a May 17 online news conference hosted by the Ethics and Public Policy Center in Washington. “From the start, Congress was very clear that none of these funds be used to fund abortion,” said Valerie Huber, a former acting deputy assistant secretary in the HHS Office of Population Affairs. “When Congress mandates something, HHS has neither the authority or freedom to choose what to ignore.”

WASHINGTON (CNS) — Washington Cardinal Wilton D. Gregory led a recitation of rosary May 17, imploring Mary to “entrust to her Son” all those affected by the pandemic. The rosary took place at the Basilica of the National Shrine of the Immaculate Conception in Washington as part of a worldwide prayer effort to end the COVID-19 pandemic. “In communion with the Holy Father following the example of the first Christian communities in this time of great trial, we lift up to the Lord through the intercession of the Blessed Virgin Mary, unceasing supplications for the end of the pandemic,” Cardinal Gregory prayed at the start of the rosary. Recitation of the rosary at the national shrine was part of a worldwide marathon of rosaries for an end to the COVID-19 pandemic that was requested by Pope Francis. Each day during May at noon Washington time (6 p.m. at the Vatican) the rosary is prayed from a different Marian shrine around the world. Pope Francis began the rosary marathon May 1 at the Vatican and will conclude it there May 31. The recitation of the rosary was livestreamed from the national shrine on various Vatican social media platforms.

JERUSALEM (CNS) — For nine years, Randa Aweis battled kidney disease, urgently in need of a transplant. In mid-May, a donor was found for the 58-year-old mother of six, a Catholic Palestinian who lives in Jerusalem. The circumstances were unusually painful because the donor — Yigal Yehoshua — a 56-year-old Jewish Israeli man from the mixed city of Lod who worked for tolerance and coexistence, was stoned to death by an Arab mob during violence by both Jews and Arabs in the city in mid-May. Arab and Jewish gangs rioted in mixed cities throughout Israel following the May 10 outbreak of violence between Israel Hamas May 10. “Yigal will go straight to heaven, to a better place, and he will always be with me,” Aweis said from her hospital bed at Hadassah Medical Center, where the transplant was performed by Dr. Abed Khalaileh, director of Hadassah’s Kidney Transplantation Service, who is Muslim. “Here we must all, Christians, Muslims and Jews, strive for peace. I don’t distinguish between Christian, Muslim or Jew — we are all human beings.” 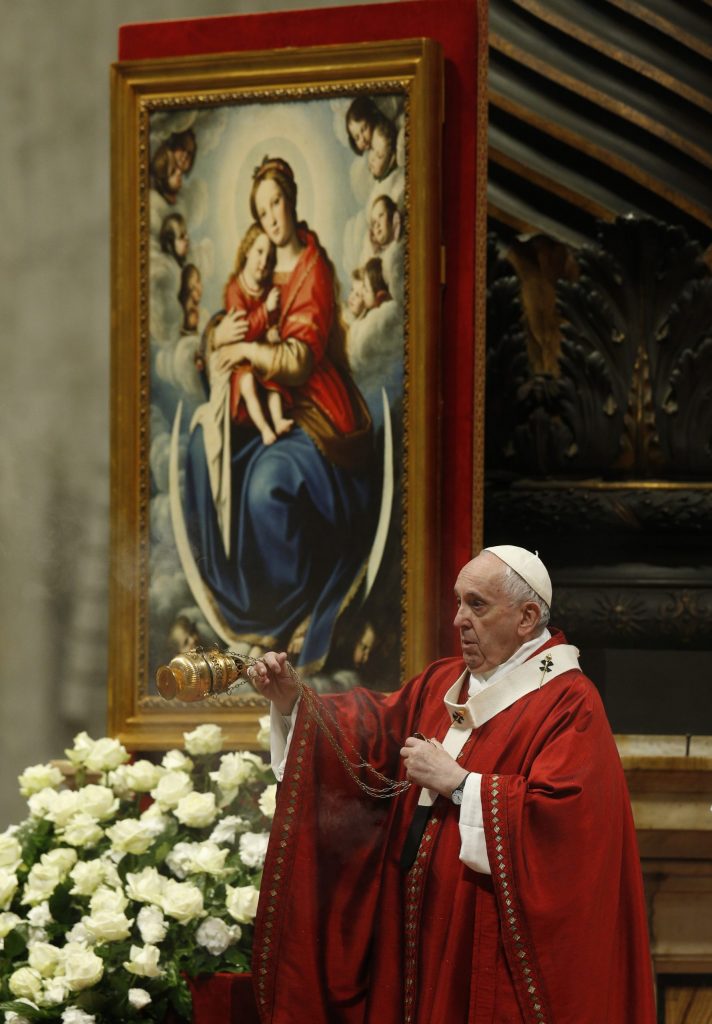 Pope Francis burns incense as he celebrates Pentecost Mass in St. Peter’s Basilica at the Vatican May 23, 2021. (CNS photo/Paul Haring)