HONG KONG (CNS) – Cardinal Joseph Zen, retired bishop of Hong Kong, reassured Catholics that he is fine after being detained and held by national security police for his support of anti-government protesters. “I have spoken with Cardinal Zen,” Hong Kong Bishop Stephen Chow Sau-yan wrote on his Facebook page. “He told me to let his friends know that he is fine. Not to worry. And he wants us to take a low-profile approach for him.” The 90-year-old cardinal returned to his home with the Hong Kong Salesians on May 11 after being held for several hours. The cardinal and three other trustees of the now-defunct 612 Humanitarian Relief Fund were detained separately on May 10 and May 11, and all were released on May 11. The fund was set up to offer financial assistance to those involved in anti-government protests in 2019 and was disbanded after coming under scrutiny by authorities over the past year. The national security police force was established “to safeguard Chinese national security.” The cardinal and others were interrogated in the Wan Chai police station for allegedly colluding with foreign forces. Hong Kong’s 2020 security law made participating in or supporting the pro-democracy movement crimes of subversion and collusion with foreign organizations and allowed for those remanded to be extradited to mainland China. Punishment ranges between a minimum of three years and a maximum of life imprisonment.

WASHINGTON, D.C. (CNS) – U.S. Rep. Chris Smith, R-N.J., called forced organ harvesting in China “a horror story” that is affecting tens of thousands of individuals” of “various religions” who are killed there “for body parts, including skin.” On May 12, Smith, a Catholic, led a discussion of organ harvesting at an online hearing of the Tom Lantos Human Rights Commission, which he co-chairs. The hearing was prompted by an April 4 article published in the American Journal of Transplantation, which asserted that China continues to execute prisoners – many of them prisoners of conscience opposed to Communist Party rule – by procuring their organs, such as hearts, lungs and kidneys, for transplants. The “dead donor rule,” a mainstay of medical ethics, is widely ignored, the article states. “Nowhere is the principle of utter disregard for the dignity of the human person, and of using people as a utilitarian means to an end, more apparent than in the horrific practice of harvesting the organs of human beings, even before they meet the standard of brain death,” said Smith. He is a regular critic of human rights abuses in China and other nations and also is the Co-Chair of the Congressional Pro-Life Caucus.

ST. PAUL, Minn. (CNS) – Archbishop Bernard A. Hebda of St. Paul and Minneapolis acknowledged with sadness and an apology a federal report released on May 11 about abuses of Native American children in government-supported boarding schools – some run by the Catholic Church, including in Minnesota. For 150 years, hundreds of these schools sought to forcefully assimilate Native American and Indigenous children into white society. “As a bishop in Minnesota, I read with sadness the Federal Indian Boarding School Initiative report released today by the U.S. Department of the Interior,” Archbishop Hebda said in a statement posted on the archdiocese’s website. “It is an important first step in what I anticipate will be a painful but necessary journey for our country and for our Church,” the archbishop said. In Oklahoma, Archbishop Paul S. Coakley of Oklahoma City and Bishop David A. Konderla of Tulsa also called the report a good first step. “It is important we understand and appreciate our history so we can make better and more informed decisions moving forward,” they said. The U.S. Department of the Interior identified 408 schools in 37 states or U.S. territories that tens of thousands of children were forced to attend from 1819 to 1969.

WASHINGTON, D.C. (CNS) – After the U.S. Senate failed to advance a “radical” abortion bill on May 11, the chairmen of two U.S. bishops’ committees urged Congress “to stop pushing abortion as a solution to needs of women and young girls” and “embrace” public policy initiatives that protect “both mother and child.” The Women’s Health Protection Act, or S. 4132, did not get the 60 votes needed to end debate on the bill and advance to a vote on the substance of the measure. The vote to end debate was 51-49. The bill, which passed in the U.S. House in September 2021 and failed in the Senate earlier this year, was “far more extreme than Roe v. Wade,” said Archbishop William E. Lori of Baltimore, Chairman of the U.S. Conference of Catholic Bishops’ Committee on Pro-Life Activities, and Cardinal Timothy M. Dolan of New York, Chairman of the Committee for Religious Liberty. It would have “imposed abortion on demand nationwide at any stage of pregnancy through federal statute” and “eliminated pro-life laws at every level of government – including parental notification for minor girls, informed consent, and health or safety protections specific to abortion facilities,” they said in a statement released on May 11. These “widely supported” pro-life laws “protect women and unborn children from an unscrupulous abortion industry,” they said.

VATICAN CITY (CNS) – The steady decline of birthrates across Europe and the West are signs of a new form of poverty that deprives humanity of a future, Pope Francis said. Families unable to have children and young people who struggle with having a family due to economic hardship or the allure of “mediocre substitutes” risk turning the “beauty of a family full of children” into a “utopia, a dream that is difficult to fulfill,” the pope said in a message sent on May 12 to participants of a conference on low birthrates in Italy. “This is a new poverty that scares me,” he said. “It is the generative poverty of those who discount the desire for happiness in their hearts, of those who resign themselves to watering down their greatest aspirations, of those who are content with little and stop hoping for something great.” According to the national statistics agency, ISTAT, Italy’s birthrate hit an all-time low with 399,431 births in 2021 compared to 404,892 in 2020. Italy, Malta, Spain, Greece and Luxembourg have the lowest fertility rates in Europe. The two-day “General State of Birth Rates” conference, its website stated, aims to “make proposals to reverse the demographic trend” in Italy which has “worsened by the effects of the COVID-19 pandemic.”

VATICAN CITY (CNS) – A Nigerian priest kidnapped in March died while in captivity, according to the Archdiocese of Kaduna, Nigeria. In a statement published on May 12 by Fides, the news agency of the Congregation for the Evangelization of Peoples, Father Christian Okewu Emmanuel, Archdiocesan Chancellor, said Father Joseph Aketeh Bako died “at the hands of his captors between April 18 and 20, 2022.” Father Bako was kidnapped on March 8 after armed terrorists attacked the parish rectory in Kudenda, a village outside Kaduna. According to Father Emmanuel, Father Bako’s brother, who was visiting him the night of the kidnapping, was killed “in his presence” by the attackers. At the time of the kidnapping, Father Bako had been ill for some time and, after witnessing his brother’s death, “his condition worsened and he died,” the chancellor said. “We have not recovered the body, but we have confirmation of death. The people who were kidnapped with (Father Bako) saw him die,” he said.

VATICAN CITY (CNS) – The young wife of the commander of the Ukrainian battalion still holed up in a steel plant in Mariupol had what she described as a “heart raising” encounter with Pope Francis. Kateryna Prokopenko, wife of Azov Regiment commander Denys Prokopenko, and Yulya Fedosiuk, wife of Azov soldier Arseniy Fedosiuk, met Pope Francis on May 11 at the end of his weekly general audience. Both women are in their 20s. The women are in almost constant contact with the wives of about 500 of the estimated 2,000 soldiers still believed to be inside the besieged Azovstal steel plant in Mariupol. “We hope this meeting will give us a chance to save their lives, actually,” Prokopenko told reporters in English after meeting the pope. “Our soldiers are ready to be evacuated to a third country.” The group of wives includes widows whose husbands’ dead bodies have yet to be recovered and who are pleading for international help so they can give their husbands a Christian burial, Fedosiuk said. She said they told the pope that an estimated 700 soldiers inside the steel mill are injured; “they have gangrene, amputations; their flesh is rotting.” As the women were talking to the pope, they said, “he held our hands.” “He told us he is praying for us, and he is doing everything” he can to push for the complete evacuation of the plant, Fedosiuk said. Denys Prokopenko had announced on May 8 that all the civilians who had been sheltering at Azovstal had been evacuated, but later, reports emerged that some civilians still were inside the miles of tunnels under the plants. 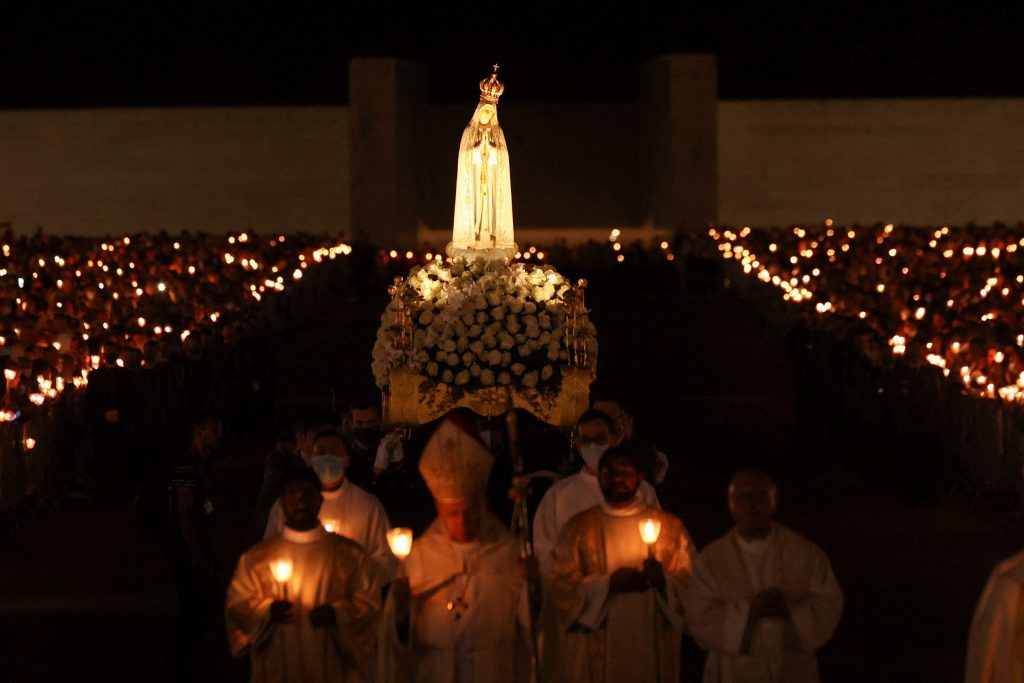 Worshippers hold candles May 12, 2022, at the Marian shrine of Fatima in central Portugal. Thousands of pilgrims arrived at the shrine to attend the 105th anniversary of the first apparition of Mary to three shepherd children May 13. (CNS photo/Pedro Nunes, Reuters)