Catholics get chance to celebrate, think about Mary with new feast day

WASHINGTON (CNS) — The Catholic Church doesn’t often add new celebrations to its pretty full liturgical calendar, but this year’s new feast day, Mary, Mother of the Church on May 21, has Catholics gearing up to mark the day or at least think a little more about Mary. The new feast day, which will be celebrated annually the day after Pentecost, was announced in a March 3 decree by the Congregation for Divine Worship and the Sacraments. The decree said the pope approved the celebration because he thought it might “encourage the growth of the maternal sense of the church in the pastors, religious and faithful, as well as a growth of genuine Marian piety.” That line struck Father Chuck Barthel, pastor of Mary, Mother of the Church Parish in St. Louis, when he first read it and he has continued to go back to it as he considers the feast with particular significance for his parish. Gaining a renewed and deeper understanding of Mary’s nurturing and caring side is something he said the church, especially in today’s climate, could certainly use. His parish is one of a handful of churches in the U.S., along with a Benedictine Abbey in Richmond, Virginia, named Mary, Mother of the Church. For this year’s celebration of the new feast day, the St. Louis church is not planning anything big, but plans to celebrate on the actual day — when he said parishioners can “enjoy each other’s company” — not during Pentecost weekend when there is already a lot going on.

Caritas migrant shelter in Tijuana under police protection after attacks

MEXICO CITY (CNS) — A Catholic-run shelter for migrants in the border city of Tijuana has been put under police protection after a robbery and arson attack on consecutive days. At least six armed individuals entered the shelter in the early morning hours of May 6 and stole some of the migrants’ meager possessions, including cash, cellphones and ID cards. On May 7, also in the early hours, the door to room where migrants were sleeping was blocked with a mattress and set on fire, said Veronica Zambrano, a spokeswoman for Caritas Tijuana, the archdiocesan charitable agency. Zambrano said staff suspect local individuals, who had previously used the shelter property for illegal activities, were responsible for the attacks. No arrests had been made by May 11. The attack on the Caritas shelter came after several hundred members of a caravan of Central American migrants, who caught the disapproving attention of U.S. President Donald Trump, arrived in Tijuana after traveling the length of Mexico. Many of the migrants participating in the caravan did not travel all the way to Tijuana; some applied for asylum in Mexico or hoped to have their immigration status regularized.

YAOUNDE, Cameroon (CNS) — The Catholic Church in Cameroon said shots were fired at the residence of Archbishop Samuel Kleda, bishops’ conference president, after he criticized policies by the government of President Paul Biya. “Projectiles were shot at the Archdiocese of Douala headquarters, breaking its windows,” the local vicar general, Msgr. Dieudonne Bayemeg, said in a statement. “There were no human injuries, and the police arrived immediately, accompanied by the archbishop, cathedral rector and household guards.” The statement, issued after the late-evening May 3 attack, said the bullets hit the room of the archdiocesan finance officer, Msgr. Alan Nibile, who threw himself on the floor. It added that inquiries were continuing and said Catholics in the central African state had been asked to “pray and remain calm.” Meanwhile, the Actualite du Cameroun news agency described the attack May 7 as an “attempted assassination” and said it was widely believed linked to Archbishop Kleda’s demands for a government dialogue with separatist groups and for Biya not to seek re-election.

DUBLIN (CNS) — Irish pro-life campaigners have criticized a decision by tech giant Google to ban campaign advertisements before the May 25 referendum on whether the right to life of the unborn should continue to be enshrined in the constitution. The government wants voters to amend the constitution to repeal the Eighth Amendment, which currently guarantees the right to life of unborn children “with due regard to the equal right to life of the mother.” If removed, legislation will permit abortion on demand up to the 12th week of pregnancy and abortion in other specific circumstances up to 24 weeks. Google announced May 9 that it would ban all campaign ads from its search engine and the YouTube video-sharing website. The move was immediately welcomed by the leading pro-choice “Together for Yes” campaign. However, pro-life groups were sharply critical of the decision. John McGuirk, communications director for Save the Eighth, accused Google of trying to rig the referendum. “Online was the only platform available to the ‘no’ campaign to speak to voters directly. That platform is now being undermined, in order to prevent the public from hearing the message of one side,” he said.

WASHINGTON (CNS) — Days before the U.S. celebrated Mother’s Day May 13, the national group Faith in Action urged others to think about immigrant mothers who have been separated from their children or run the risk of never seeing them again. During a May 8 conference call, Faith in Action, a grass-roots faith-based network in the United States, featured three women from around the country currently seeking refuge from deportation in various properties affiliated with religious organizations. They also called attention to plans by the Trump administration to separate children from parents if they’re caught trying to cross the border without legal permission. “Few things are as crystal clear in Scripture as the fact that we are to welcome the sojourner, to treat our neighbors as ourselves … and our immigrant neighbors are indeed our neighbors,” said the Rev. Julie Peeples, senior pastor at Congregational United Church of Christ, in Greensboro, North Carolina, during the call. She was one of two faith leaders who helped highlight the stories and plight of immigrant mothers such as Juana Ortega, a mother of four who is originally from Guatemala. Her husband is a U.S. citizen but because of a prior deportation order, she cannot stay in the country. When Immigration and Customs Enforcement gave her a month to leave, she couldn’t handle the thought of leaving her children behind, she said, so she sought sanctuary at a local church, afraid that immigration agents would physically remove her from her home. She’s been residing in a church in North Carolina for almost a year. “This situation has affected my family. My husband thinks my youngest son is falling into a depression,” she said in tears.

VATICAN CITY (CNS) — Seeking Christian unity is more urgent than ever because of the ongoing persecution of Christians, Pope Francis told an Orthodox leader. Meeting with Metropolitan Rastislav, primate of the Orthodox Church in the Czech and Slovak Republics, the pope said the “suffering of many brothers and sisters persecuted because of the Gospel urgently calls us to act in seeking greater unity.” The primate met with the pope at the Vatican May 11 as part of a May 9-12 pilgrimage to Rome; during his visit he also met with Cardinal Kurt Koch, president of the Pontifical Council for Promoting Christian Unity, and celebrated the Divine Liturgy at the tomb of St. Cyril in Rome’s Basilica of St. Clement. Sts. Cyril and Methodius are honored by European Catholics and Orthodox. Known as the Apostles to the Slavs, the two brothers preached the Gospel throughout Central and Eastern Europe in the late ninth century when the churches of Rome and Constantinople were still united. 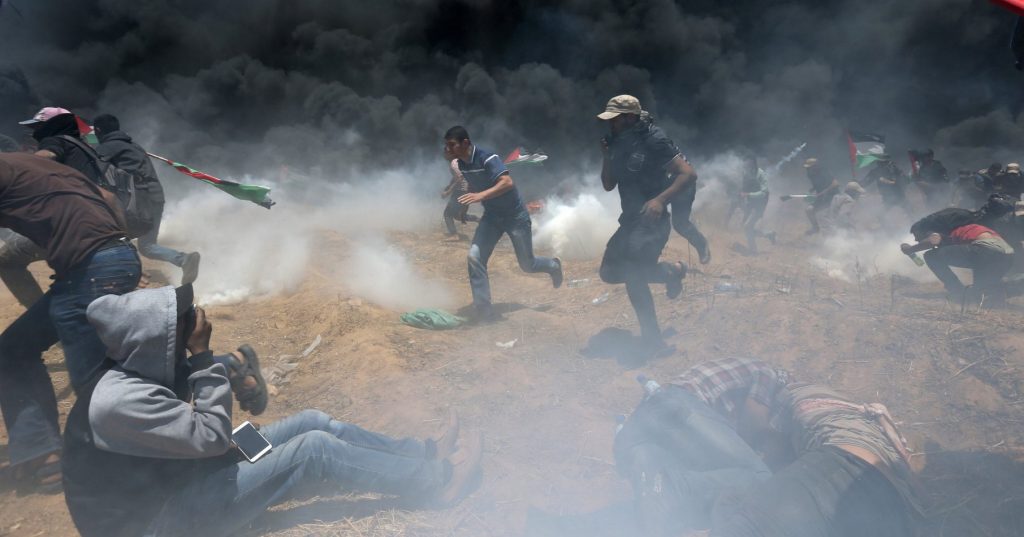 Palestinians run for cover from Israeli fire and tear gas at the Israel-Gaza border during a protest against the U.S. embassy move to Jerusalem May 14. (CNS photo/Ibraheem Abu Mustafa, Reuters)