EMMITSBURG, Md. (CNS) — When the world shut down last year because of the pandemic, the National Shrine of St. Elizabeth Ann Seton decided it was time to reach outward. The question was how — when, for a time, people couldn’t even visit the shrine in Emmitsburg? The answer was simple, profound and one that Mother Seton, America’s first native-born saint, would have appreciated: Pray. So, buoyed by dedicated staff members and seminarians from nearby Mount St. Mary’s Seminary, the shrine in the Baltimore archdiocese created a prayer hotline last April that has proven so successful, it plans to continue well after COVID-19 has receded. To date, over 2,000 calls have been logged, and many of them have turned into relationships that have changed the lives of people on both ends of the line. The hotline — 866-202-4934 — is available between 10 a.m. and 5 p.m. The shrine also has a prayer request page on its website, https://setonshrine.org/prayer-requests-2. “We are sometimes the only ones they talk to; the only ones who say their name,” said Rebecca Corbell, evangelization programs manager at the shrine. “Having that connection, having a person who knows your name builds a relationship, that is so powerful.”

VATICAN CITY (CNS) — The costs of harming nature are greater than any economic benefits drawn from such exploitation, said Cardinal Peter Turkson. So many species and habitats are destroyed “when our conduct and treatment of nature gets abusive,” said the cardinal, prefect of the Dicastery for Promoting Integral Human Development. Therefore, “for ethical, moral and theological reasons, it is incumbent upon us to safeguard the biodiversity on earth.” The cardinal and Jane Goodall, primatologist and anthropologist, were the two keynote speakers April 20 at a webinar on biodiversity organized by the dicastery and the Vatican COVID-19 Commission’s ecology taskforce and held in partnership with numerous other church-based and nonprofit organizations. Coming ahead of Earth Day, which is April 22, the webinar was meant to help inspire and point the way forward for parishes, individuals and communities in preparation for the 15th meeting of the Conference of the Parties to the Convention on Biological Diversity in October. The U.N. Global Biodiversity Report for 2020 highlighted the importance of preserving biodiversity as part of addressing climate change, providing long-term food security and preventing future pandemics.

PORTLAND, Ore. (CNS) — Like many Americans nationwide, Oregon Catholics received the April 20 conviction of former Minneapolis police officer Derek Chauvin with mixed feelings: consolation, skepticism, resolve. Portland has been the site of some of the most persistent and destructive protests since Chauvin killed George Floyd in May 2020. By contrast, reaction to the verdict was subdued on the streets and Catholic leaders were reflective. Chauvin, who is white, was found guilty by a jury that deliberated for more than 10 hours over two days of second-degree unintentional murder, third-degree murder and second-degree manslaughter in the death of Floyd, an African American. Tony Jones, chairman of the African American Catholic Community of Oregon, said the verdict came as a relief. “Not a dancing in the street kind of relief, but a relief as in, ‘Wow, it could have been worse,’” he told the Catholic Sentinel, Portland’s archdiocesan newspaper. The verdict does not change the views he shared with Portland Archbishop Alexander K. Sample this past February during a meeting with the archbishop and fellow members of the community Jones chairs. Prior to the meeting, Jones reflected on what Archbishop Sample has shared in his Friday “Chapel Chats” and other talks — that racism is a sin. “I thought deeply about why it’s a sin,” said Jones. His conclusion was the sin is “the lie people tell themselves.”

WASHINGTON (CNS) — The Biden administration has filed an appeal April 20 of a Jan. 19 federal court’s ruling to block an Affordable Care Act provision barring discrimination by health insurers and providers against transgender people. The regulation was issued in 2016 by the U.S. Department of Health and Human Services requiring doctors to perform these procedures in children and adults or be held liable for discrimination. Catholic and other opponents of the provision, Section 1557, call it a “transgender mandate” and say forces doctors and hospitals to perform gender-transition procedures against their moral conscience and professional medical judgment. “This is bad for patients, doctors and religious liberty,” said Luke Goodrich, senior counsel at Becket, a law firm in Washington that focuses on religious liberty cases. In a series of tweets April 20, Goodrich said: “The Biden Admin shouldn’t have appealed. But we look forward to another ruling that protects patients, aligns with current medical research, and ensures doctors aren’t forced to violate their religious beliefs and professional medical judgment. “The government’s own doctors during the Obama Admin agreed: ‘Based on a thorough review of the clinical evidence …. there is not enough evidence to determine whether gender reassignment surgery improves health outcomes for [patients] with gender dysphoria.’” The lawsuit was filed on behalf of Franciscan Alliance, a religious hospital network serving Indiana and Illinois that now goes by the name Franciscan Health, and the Christian Medical and Dental Associations. The states of Texas, Kansas, Kentucky, Nebraska and Wisconsin also joined in the suit.

VATICAN CITY (CNS) — Pope Francis has called for a global prayer marathon for the entire month of May, praying for the end to the pandemic. “The initiative will involve in a special way all shrines in the world” in promoting the initiative so that individuals, families and communities all take part in reciting the rosary, “to pray for the end of the pandemic,” said the Pontifical Council for Promoting New Evangelization in a press release April 21. “It is the heartfelt desire of the Holy Father that the month of May be dedicated to a prayer marathon dedicated to the theme, ‘from the entire church an unceasing prayer rises to God,’” it said. The theme refers to the miraculous event recounted in the Acts of the Apostles (12:1-12) when all the Church prayed for Peter, who was imprisoned until God sent an angel to free him, illustrating how the Christian community comes together to pray in the face of danger and how the Lord listens and performs an unexpected miracle.

Nuncio tells besieged Mexican town: The Church is with you

MEXICO CITY (CNS) — Archbishop Franco Coppola, papal ambassador to Mexico, recently traveled to a town besieged by warring drug cartels to reiterate the Church’s commitment to serving populations suffering violence. The ambassador, or nuncio, also wanted to raise awareness of the situation in Aguililla, a town in western Michoacán state, where drug cartels have battled each other and blocked highways, leaving residents unable to travel freely and causing shortages of everything from food to fuel. “We in the Church cannot get involved in war, but we can tend to the wounded, to the people. My visit is to make people feel the Church is close, that they’re not alone and will not be abandoned,” the nuncio said in Aguililla, where he led a procession and celebrated Mass April 23 for the people. “The Church must be at the side of the people, not fleeing.” The nuncio’s visit to Aguililla offered a brief respite from the violence gripping the region, which is being disputed by rival criminal organizations: United Cartels and the Jalisco New Generation Cartel. The situation became so severe in Aguililla that eight bodies were found decapitated earlier in April and one cartel used a drone to drop explosives on the police. The nuncio said he shared news of the beheadings on social media and had his account temporarily suspended. 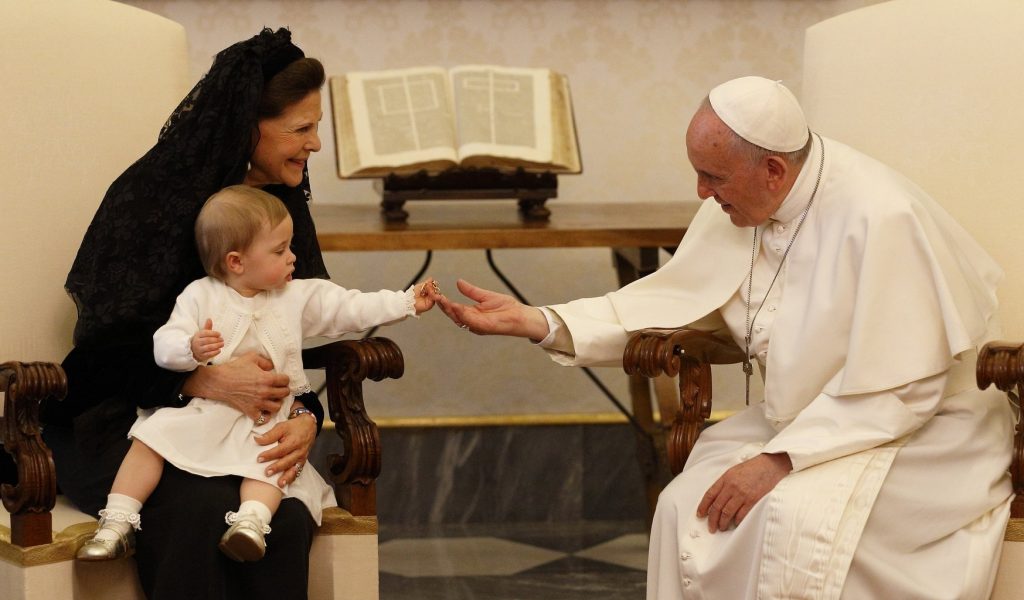