WASHINGTON (CNS) — The percentage of sermons about abortion is in the single digits, according to a Pew Research Center study, the results of which were released April 29. Even a mention of abortion in a sermon is rare, according to the study. Pew analyzed nearly 50,000 sermons shared online or livestreamed by more than 6,000 U.S. churches and delivered between April 7 and June 1, 2019, a time frame that included Easter. Five percent of Catholic homilies analyzed during the study period mentioned abortion, which topped the national average of 4%. Other Christians were grouped into “mainline Protestant,” “evangelical Protestant” and “historically black Protestant.” Nineteen percent of Catholic congregations heard abortion mentioned in at least one sermon during the study period, which matched the national average. Evangelicals led the way with 22%, with mainline Protestants trailing at 10%. The percentage of Catholics hearing about abortion may be surprising, according to Dennis Quinn, the lead researcher for the study. The media length of Catholic homilies was 14 minutes — but 37 minutes for all sermons, with black Protestants topping out at 54 minutes.

Catholic women reflect on pregnancy, childbirth during the pandemic

PORTLAND, Ore. (CNS) — At 8 a.m. on Easter, two days before giving birth, Jennifer Ratigan pulled into a hospital parking lot and waited for a physician’s assistant — donning full protective garb, including a face mask and shield — to reach through a rolled-down window to swab her nose for a COVID-19 test. The hospital was preparing for a potential surge in coronavirus cases and was testing all mothers who’d likely deliver soon. Medical staff wanted to allocate equipment and health care workers properly. Ratigan, whose test results were negative, understood the precaution. But the contrast between the strange early morning outing and her soul’s desire was acute and painful. She longed to be at Mass, to be among friends, to be watching her five children gleefully scramble for hidden eggs. “It was emotional,” said the 42-year-old, a member of St. Rose of Lima Parish in Northeast Portland. “I felt sad and lonely.” For pregnant and postpartum mothers, the pandemic has upended birth plans and altered expectations. It’s caused heightened uncertainty and twinges of fear. At the same time, many women, Ratigan included, say it’s intensified their awe of life and reliance on God. “This Easter I needed the surrender prayer, ‘Jesus, I turn it over to you,’” Ratigan said.

As lockdowns end, pope prays for prudence in behavior, judging others

VATICAN CITY (CNS) — Pope Francis began his early morning Mass praying that people would be prudent and obedient as governments begin lifting restrictions imposed to stop the coronavirus pandemic. And, in his homily at the Mass April 28, he prayed that people would be prudent in their judgment of others, refraining from gossip and not believing lies and “fake news” about entire categories of people. “At this time, when we are beginning to receive instructions for coming out of quarantine, we pray that the Lord would give his people — all of us — the grace of prudence and obedience to the instructions so that the pandemic does not return,” he said at the beginning of the Mass in the chapel of the Domus Sanctae Marthae. The pope’s comments came two days after the Italian bishops expressed concern that the Italian government’s plan for easing the pandemic lockdown in stages through June 1 had not made provision for the resumption of public Masses. The prime minister promised to study the issue to see if there were ways to do so safely.

HONG KONG (CNS) — Communist authorities in territory covered by the Anhui Diocese removed crosses from the top of two church buildings, sources told ucanews.com April 27. The sources said they fear more such actions. Authorities removed the cross of Our Lady of the Rosary Church April 18, said a man ucanews.com identified only as “John, a source in the diocese.” He said the parish was registered with the government, but had no priests or nuns to lead its religious activities. Lay parishioners managed parish religious programs. Five days before the incident, John told ucanews.com, parish leaders approached local authorities about repairing the building, but officials said the plan was to remove the crosses of both Catholic and Protestant churches in the area. On April 16, a local government official asked parishioners for the keys to the church. “They wanted to enter the church and remove the cross,” John said. The local official told the parishioners that officials were acting on the “directions from superiors.” However, no documents were produced to prove the claim. The parishioners reported the developments to Bishop Liu Xinhong of Anhui. He directed them to go to the local office of the Chinese Catholic Patriotic Association and ask for details, but local officials of the association denied having information on the matter.

Sainthood cause for Dorothy Day picking up steam in U.S.

WASHINGTON (CNS) — The sainthood cause for Dorothy Day, co-founder of the Catholic Worker movement, believes it could have all of the documentation prepared at some point next year to send to the Vatican Congregation for Saints’ Causes. It would represent the culmination of an effort begun informally in 1997, but in earnest in 2002. After that, the process is largely in the Vatican’s hands — but also in God’s. Robert Ellsberg, publisher of Orbis Books, a ministry of the Maryknoll Fathers and Brothers, said the Claretian Fathers, through their magazines U.S. Catholic and Salt, began hailing Day as a saint shortly after her death in 1980. Ellsberg had included Day in his book “All Saints,” and he had given a talk shortly after its 1997 publication, which argued that she should be canonized. Cardinal John O’Connor of New York, who voiced opinions on Day’s canonization in the 1980s, invited Ellsberg and his family to attend a Mass he was celebrating to observe the centenary of Day’s birth. After the Mass, according to Ellsberg, Cardinal O’Connor approached him and asked whether he really thought Day should be made a saint. When Ellsberg said yes, the cardinal asked him to gather some others who knew Day for a conversation with him. “He really wanted to hear what people had to say. He didn’t act like, ‘What a big favor I’m doing for Dorothy Day,’ Ellsberg told Catholic News Service. “He said, ‘I do not want it on my conscience that I did not do what God wanted done.’”

MEXICO CITY (CNS) — Mexico’s bishops have called for the federal government to reconsider its COVID-19 response, urging the president to set aside a suite of mega-projects and instead put the funds toward families facing pandemic hardships. The bishops also announced an initiative — “Families without hunger” — to combat rising hunger as millions of Mexicans lose work and sources of income with the spread of COVID-19. “We invite those with the decision power over large national projects and public works to consider the opportunity to allocate these resources, during the months in which many Mexicans are without work, to mitigate the food shortages in many homes. … Health, food and work are inescapable demands in this COVID-19 health emergency,” the bishops said in April 24 statement. “We exhort and ask all Mexicans, including (governments) to forget personal, party, ideological, political and religious interests and unite in saving every human life.” The statement alluded to projects being pushed by President Andres Manuel Lopez Obrador, including an $8 billion refinery, two railways and an airport near Mexico City. The president has provided funding for these mega-projects amid the COVID-19 crisis. 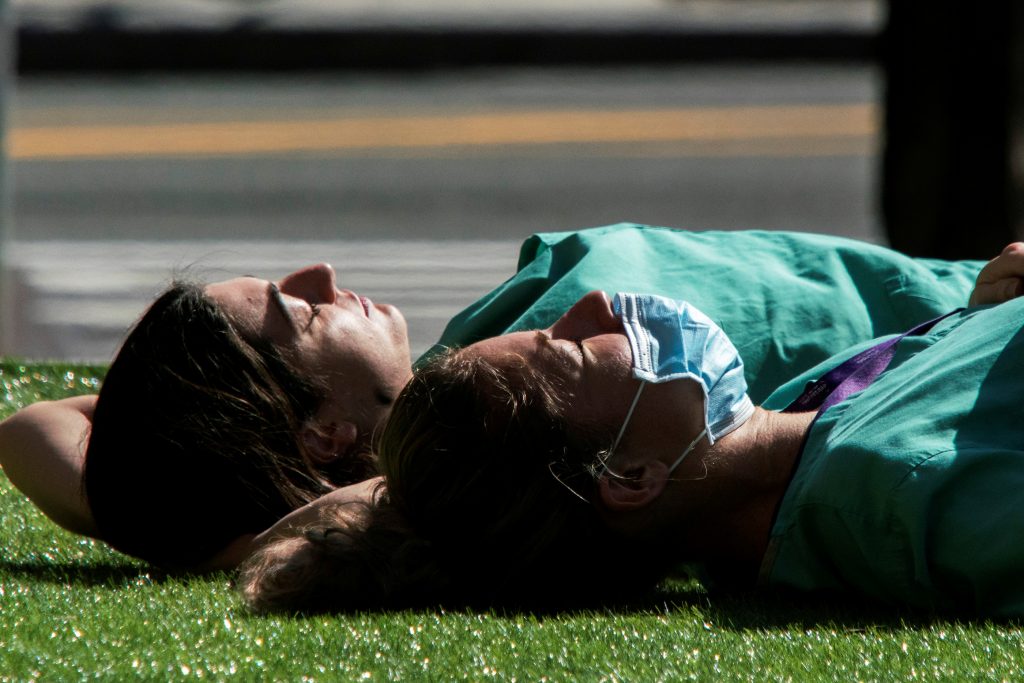 Health care workers in New York City rest near NYU Langone Hospital May 3, 2020, during the coronavirus pandemic. As of May 4, more than 67,000 people in the U.S. have died from the virus. (CNS photo/Eduardo Munoz, Reuters)