Vatican officials in U.S to study alleged miracles in Father Tolton’s cause

QUINCY, Ill. (CNS) – The local ABC-TV affiliate in Quincy, where Father Augustus Tolton grew up and is buried, reported on April 14 that Vatican representatives were in the United States to investigate possible miracles related to the priest’s sainthood cause. Father Tolton was born into slavery and is the first recognized African-American priest ordained for the U.S. Catholic Church. His cause for canonization was officially opened by the Archdiocese of Chicago in 2010 and he received the title “Servant of God.” On Dec. 10, 2016, his cause took a step forward at a cemetery in Quincy where his remains were exhumed, verified and reinterred. In June 2019, Pope Francis declared that Father Tolton lived a life of heroic virtue, giving him the title of “Venerable.” The next step is beatification, which requires verification of a miracle attributed to the sainthood candidate’s intercession. In general, a second such miracle is needed for canonization. While Father Tolton died in Chicago in 1897, he requested to be buried in Quincy, which is in the Diocese of Springfield. He and his family had fled there after escaping slavery in nearby Missouri and that  is where he returned to minister after being ordained in Rome on Easter in 1886. In its April 14 report, KHQA-TV Channel 7 provided no details as to what the alleged miracles under investigation might entail.

WASHINGTON, D.C. (CNS) – South Carolina’s Supreme Court has issued a temporary stay blocking the state from executing death-row inmate Richard Moore by firing squad. The brief order from April 20 put a stop to the scheduled April 29 execution and said details would be issued at a later date. Moore’s attorneys requested the stay due to pending litigation in another court challenging the constitutionality of the state’s execution methods. They also want the U.S. Supreme Court to review Moore’s case to determine if his sentence was proportionate to his crime. On April 15, Moore chose death by firing squad over electrocution but described both methods as unconstitutional. Moore, who is 57, is scheduled to be executed for the death sentence he received nearly 20 years ago for the 1999 murder and robbery of a South Carolina store clerk. His execution had initially been scheduled for 2020 but was postponed because prison officials said they did not have the necessary lethal injection drugs. Two weeks prior to his scheduled execution date, Moore was given the choice for how he wished to be put to death. A South Carolina law passed a year ago made the electric chair the state’s primary method for executions since drugs for lethal injections have been difficult to obtain. The law also stipulates that prisoners have the option of choosing to be executed by firing squad.

MILWAUKEE, Wisc. (CNS) –  Milwaukee Archbishop Jerome E. Listecki said the life and work of Project Rachel founder Vicki Thorn, who died unexpectedly on April 20, stand “as a living testimony to an unwavering and unconditional defense of life at all stages, and to the mercy of God’s love.” Thorn was 72. The Catholic Herald, Milwaukee’s archdiocesan newspaper, reported that she died of a massive heart attack. Funeral arrangements were pending. As the founder of Project Rachel, she single-handedly created a post-abortion healing ministry at a time when none existed. She maintained an office at the Milwaukee archdiocesan pastoral center for 37 years. During that time, her ministry expanded across the U.S. and around the world. Now overseen by the U.S. Conference of Catholic Bishops, Project Rachel is a diocesan-based network of specially trained priest confessors, mental health professionals, spiritual directors and others who provide ongoing, one-on-one confidential post-abortion care. In an April 20 statement, Archbishop Listecki said he and the pastoral center staff offered “our deepest condolences” to Thorn’s husband of 50 years, William, and the couple’s six children.

VATICAN CITY (CNS) – The Vatican will never stop its diplomatic efforts to mediate an end to the war against Ukraine, Pope Francis said. However, the meeting between the pope and Russian Orthodox Patriarch Kirill of Moscow planned for June has been canceled out of concern it could cause “confusion,” and there will be no papal visit to Kyiv while war rages, the pope said in an interview with the Argentine daily newspaper La Nación on April 21. Pope Francis told reporters on April 2 he was considering a possible visit to the Ukrainian capital. But in his latest interview, he told La Nación that “I cannot do anything that puts higher objectives at risk, which are the end of the war, a truce or, at least, a humanitarian corridor. What good would it do for the pope to go to Kyiv if the war were to continue the next day?” he said. When asked about  Patriarch Kirill, Pope Francis said, “I am sorry that the Vatican has had to suspend a second meeting with Patriarch Kirill, which we had scheduled for June in Jerusalem.” Their first meeting had been in 2016 in Havana, the first time the pope and Moscow patriarch had met personally. He explained that the Vatican’s diplomatic team understood that such a meeting “at this time could lead to much confusion.” Personally, he said he seeks to promote fruitful interreligious dialogue because mutual understanding or agreement “is better than conflict.”

NEW ORLEANS (CNS) – The founder of an internet safety initiative warned Catholic school teachers and administrators on April 20 about the appeal and impact of social media on today’s students. Chris McKenna, founder of Protect Young Eyes (www.protectyoungeyes.com), told participants at the National Catholic Educational Association’s conference in New Orleans that the world has changed for children because digital technology has been designed slickly to grab kids’ attention and keep them hooked. He said the ubiquity of online pornography and the sophisticated algorithms used by social media platforms to lure children and teens into inauthentic relationships with strangers and also encourage comparison envy have created unprecedented emotional challenges that can actually harm the brain. “Please try not to start another conversation, ‘When I was a kid …’ because if TikTok existed when you were a kid, you would’ve been addicted, too,” said McKenna, a father of four. Contrary to the common wisdom that kids are “resilient,” McKenna said that while children with developing brains are “incredibly adaptive,” the bottom line is that “trauma is trauma.” “We live in a time, with digital doorways everywhere, where the opportunities for trauma to our young people are more prevalent than ever,” he said, noting that the digital pornography today is of a type far removed from the “2D” pornography of the 1970s.

Vatican delegation travels to Vietnam to work on diplomatic ties

HANOI, Vietnam (CNS) – A Vatican delegation traveled to Vietnam, hoping to accelerate a process for enhancing diplomatic ties between the Holy See and Vietnam. On April 20, the three-member delegation, led by Msgr. Miroslaw Wachowski, the Vatican’s undersecretary for relations with states, arrived in Hanoi to start a seven-day working visit, reported ucanews.com. Other delegates are Vietnamese Msgr. Francis Cao Minh Dung and Korean Father Han Hyun-taek. The delegates were warmly welcomed by Singapore-based Archbishop Marek Zalewski, nonresident pontifical representative to Vietnam, Archbishop Joseph Vu Van Thien of Hanoi, three priests and officials from Vietnam’s Ministry of Foreign Affairs and the Government Committee for Religious Affairs. Jesuit Father Joseph Dao Nguyen Vu, head of the office of the Catholic bishops’ conference of Vietnam, said the Vatican delegates were to attend the ninth meeting of the Vietnam-Holy See Joint Working Group from April 21-22 to discuss ways to set up an office of a permanent papal representative in the country. Ucanews.com reported that the group started to work toward agreements to improve bilateral relationships, but no meetings have been held during the past two years due to the prolonged COVID-19 pandemic. The Vatican has had no diplomatic relations with Vietnam since the last Vatican envoy was expelled from the country in 1976 after the communists took control of South Vietnam. 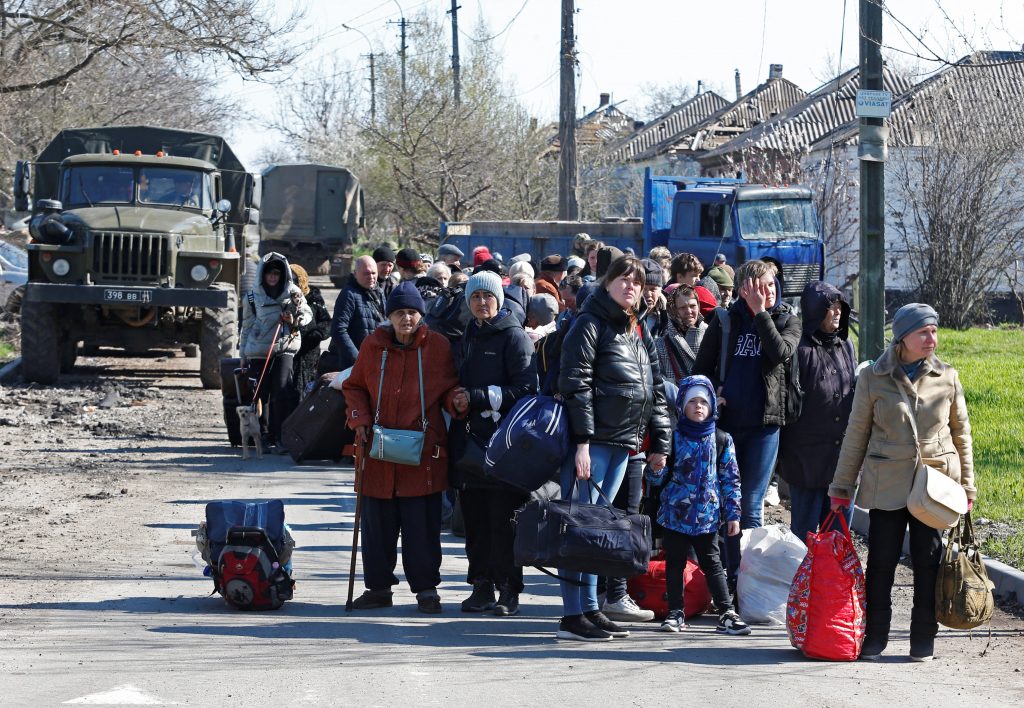 Evacuees in the southern port of Mariupol, Ukraine, wait before boarding a bus to leave the city April 20, 2022, during Ukraine-Russia conflict. (CNS photo/Alexander Ermochenko, Reuters)