Never engage in dialogue with the devil, pope says

VATICAN CITY (CNS) — Christians should follow the example of Jesus in the desert by never trying to dialogue with the devil when tempted, Pope Francis said. “Jesus does two things with the devil: he drives him away or, as in this case, responds with the word of God. Beware: never dialogue with temptation, never dialogue with the devil,” the pope said March 1 during his Sunday Angelus address. Before praying the Angelus prayer with pilgrims in St. Peter’s Square, the pope reflected on the Sunday Gospel reading from Matthew, which recounted the devil’s temptation of Jesus in the desert after Jesus fasted for 40 days and 40 nights. In responding to the sinister propositions with “the word of God and not His own word,” Jesus teaches the proper way to confront the devil, who often adds his voice to “the many voices that try to tame one’s conscience,” the pope said.

OXFORD, England (CNS) — Hundreds of thousands of people have been forced out of their homes in Burkina Faso as Christian communities are targeted in a spiral of Islamist killings. The surge of attacks has forced some families to flee and leave everything behind, and the violence is threatening to spread to other countries, said Jennifer Overton, West Africa regional director for Catholic Relief Services. “Burkina Faso is home to some of the world’s poorest communities — even without this violence, people face chronic food shortages, high unemployment, climate change and environmental degradation,” Overton told Catholic News Service Feb. 28. She said dozens of Catholic schools had been forced to close after their teachers fled. Overton, who toured affected areas, said she had met a farmer in the northern Kaya diocese who had allowed more than 500 displaced families to settle on his land and another once-prosperous landholder who was living in a lean-to with his children after escaping repeated shooting sprees. A Christian woman had taken shelter with her daughters at a government encampment in a large town, Overton said, only to be driven out when an armed gang attacked the facility and shot up the local church. “We want people to have productive lives, set up work and send their kids to school,” she said. “But that won’t happen if all we see is more chaos and crisis, with more people needing help. It’s in everyone’s best interest to stop this violence before it gets worse.”

NEW HAVEN, Conn. (CNS) — On Ash Wednesday, Feb. 26, the Knights of Columbus, the international fraternal organization based in New Haven, released videos and other resources to help men on their spiritual journey. Titled “Into the Breach,” the video series has 12 episodes that address “many of the challenges modern men face, including fatherhood, marriage and leadership,” said a news release from the Knights. The videos and other resources can be found at kofc.org/intothebreach. “Catholic men and fathers shoulder a great responsibility. Our role in evangelization is indispensable, especially within our homes — building the domestic church,” Supreme Knight Carl Anderson said in a statement. “Our families and our parishes need our faithful witness more than ever. “As Catholic men and as Knights of Columbus, it is our duty to ‘step into the breach’ and play our part in the renewal of our families and the Church,” he added. The Knights said the series was inspired by Phoenix Bishop Thomas J. Olmsted’s 2015 document, “Into the Breach: An Apostolic Exhortation to Catholic Men,” which called men to be prepared for the spiritual battle for their souls and the souls of their families.

WASHINGTON (CNS) — As a new Lenten season begins, Father Jorge Obregon from Houston is encouraging young Latino Catholics to participate in a new spiritual campaign titled Life Savers. “I hope this can get to as many Spanish-speaking people starting in Spain and all the way from Canada to Argentina,” Father Obregon told Catholic News Service in a recent phone interview. According to Obregon, the campaign’s inspiration evolved from the 2019 film “Unplanned,” which tells the true story of Abby Johnson from Bryant, Texas. Johnson became the youngest clinic director in Planned Parenthood’s history. After she was asked to assist in an abortion — which was not her role as director but the clinic was shorthanded that day — she quit and became an outspoken pro-life activist. Sponsored by New Fire, a project for young people and adults who want to discover the Catholic faith, the 40-day Life Savers campaign has five focus areas. Two areas that will vary from week to week are leaving behind one’s vices and a little sacrifice. These commitments include refraining from social media and hot showers. Another area is getting close to Mary, and committing to praying the rosary daily. The campaign also challenges participants to complete 30 minutes of daily prayer to Jesus and to cultivate one’s interior life by exercising additional prayer, generosity and perseverance. Father Obregon said each week, there will be a theme along with detailed videos.

‘My life just isn’t as valuable as others’: Woman sues British government

MANCHESTER, England (CNS) — A woman with Down syndrome will take the British government to court in an attempt to change a law that permits abortions up to birth of children considered to be “seriously handicapped.” Heidi Crowter, 24, says it is wrong to treat unborn children differently because of perceived disabilities. “At the moment in the U.K., babies can be aborted right up to birth if they are considered to be seriously handicapped,” she said in a Feb. 23 statement emailed to Catholic News Service. “They include me in that definition of being seriously handicapped — just because I have an extra chromosome.

Catholic recalls standing her ground on train by staying seated

HOUSTON (CNS) — Gertrudejane Holliday Stone, a parishioner at St. Mary of the Purification Church in Houston, was a Freedom Rider even before the term was coined. In an interview during Black History Month, the octogenarian recalled when she was just a 21-year-old college senior at Fisk University, a historically black university in Nashville, Tennessee, in 1955 studying to be a teacher. She looked forward to Christmas break while riding on a passenger train from Tennessee back to her family’s home in Houston. Then a white conductor told her to move from her train seat and go back to a “Jim Crow coach.” Jim Crow was a racist term derived from a white theater character wearing black face that was generally used to describe racial segregation laws. Most people now have heard about Rosa Parks in Montgomery, Alabama, who was arrested after refusing to give up her seat on a municipal bus that very same month and year — Dec. 1, 1955. But that action was not yet widely known when Stone was told to move. “God doesn’t put a spirit of fear in you. He puts a spirit of power, sound mind and love for your fellow man,” Stone told the Texas Catholic Herald, newspaper of the Archdiocese of Galveston-Houston. “But enough was enough was enough. I said I was not moving.” 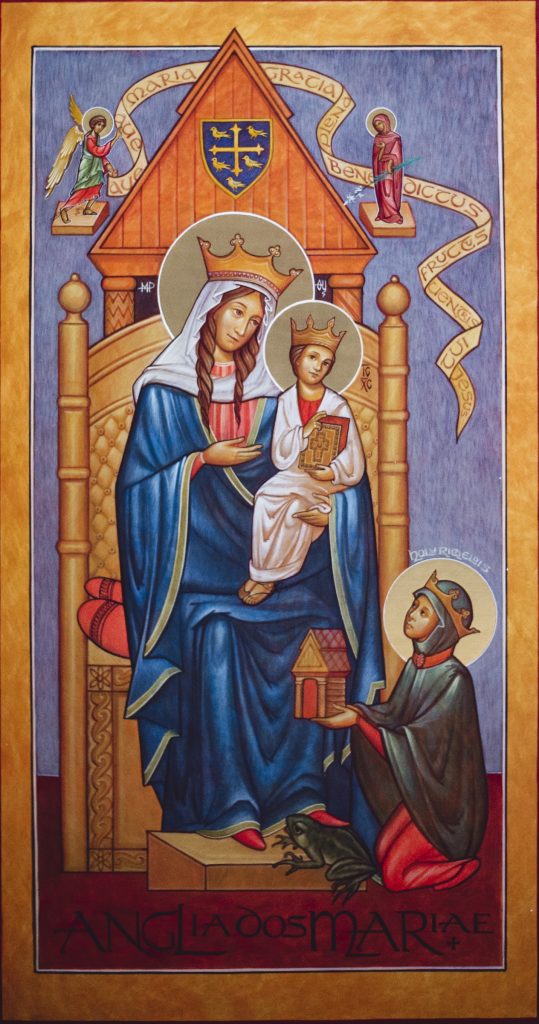 Following his weekly audience at the Vatican Feb. 12, 2020, Pope Francis blessed this “Dowry Painting” of Our Lady of Walsingham, the Catholic national shrine dedicated to Mary in Norfolk, England. (CNS photo/courtesy Behold 2020)