CLEVELAND (CNS) — Ursuline Sister Dianna Ortiz was teaching indigenous children as a missionary in Guatemala in 1989 when her ministry was torn apart in the midst of the country’s brutal civil war. Guatemalan soldiers abducted her from a garden Nov. 2, detaining her for 30 hours. She reported being gang raped and tortured repeatedly until she escaped. Returning to the United States, Sister Ortiz became a human rights advocate and peacemaker, starting an organization for torture survivors and becoming a visible presence of nonviolence at vigils and marches in the nation’s capital. Sister Ortiz, 62, died while in hospice care in Washington early Feb. 19 after a return of cancer. Friends reported that Sister Ortiz had tested positive for the coronavirus in the fall while on a trip to New Mexico. Although she had mild symptoms and was able to return to Washington, she continued to feel ill for weeks afterward. Medical tests Feb. 12 discovered inoperable cancer. Friends and colleagues recalled Sister Ortiz, who for the last year was deputy director of Pax Christi USA, for having a gentle spirit that guided a steely determination to work for justice and peace for three decades. “She was a witness to justice and human rights. So much of what she did was pretty quiet,” recalled Marie Dennis, senior adviser to the secretary general of Pax Christi International, who lived with Sister Ortiz in the Assisi Community in Washington since the early 1990s.

NAIROBI, Kenya (CNS) — Catholic relief agencies in Ethiopia welcomed a move by the government to allow more access in Tigray, the semi-autonomous region in the north, where a military operation displaced millions and left an unspecified number of people dead. Amid increased international calls for unrestricted access, Prime Minister Abiy Ahmed Ali announced Feb. 24 that 135 personnel from bilateral and multilateral organizations had been cleared to travel and undertake aid work in the region. Seven international media organizations, including The New York Times, the BBC and Reuters, also were granted access. “This is all what the humanitarian agencies have been seeking. They have been asking for access to the region so that they can provide the much needed services to the people,” Andre Atsu, the Jesuit Refugee Service regional director in Eastern Africa, told Catholic News Service. JRS is one of the agencies providing humanitarian assistance in the region, where half of the 6 million population is reportedly displaced.

EASTON, Mass. (CNS) — “Try Prayer! It Works!” — an annual contest sponsored by Family Rosary — is now accepting entries from children in kindergarten through 12th grade who are enrolled in a Catholic school, religious education program, parish or other organizations, including home school. All U.S. contest entries must be submitted by March 25. This year’s theme is “Do Whatever He Tells You” (John 2:5) and is aimed at helping families explore how Mary’s example and intercessory prayer can help people follow God’s will. “From Mary, especially through the prayer of the rosary, participants can explore how Mary’s maternal influence can lead families closer to Jesus,” said a Family Rosary announcement about the contest. The contest guidelines can be found online at https://bit.ly/3sl9isa. The main Family Rosary website is www.FamilyRosary.com. This contest invites families to light a candle and pray together, and then share this year’s theme as a family reflection. “We hope that families will grow closer to each other and deeper in the faith as they share this reflection experience,” said Holy Cross Father Jim Phalan, national director of Family Rosary.

WASHINGTON (CNS) — During a Feb. 22 evening program on CNN, Washington Cardinal Wilton D. Gregory offered a prayer for those who have died from COVID-19 asking God to “grant enteral peace to all our sisters and brothers lost to this disease. Let us now open our hearts to recall those who have died from the coronavirus,” Cardinal Gregory prayed. “Strengthen those families and friends who remain behind, to comfort one another and to wipe the tears from our eyes. May each one find peace and let the memory of our loved ones itself be a blessing.” The cardinal called it “a great honor and privilege” to offer the prayer at the invitation of Jake Tapper, CNN anchor and chief Washington correspondent on the program “We Remember 500,000: A National Memorial Service for Covid-19.” It commemorated the milestone reached Feb. 22 when the United States surpassed 500,000 deaths due to the coronavirus. Over 1,200 coronavirus deaths were reported Feb. 22, bringing the nationwide total to 500,103. More than 28.2 million Americans have been infected by the virus. Also, as of Feb. 22, close to 13% of the U.S. population has received the first round of the COVID-19 vaccine, and about 6% of Americans have received both shots.

VATICAN CITY (CNS) — For believers, the ability to practice their faith and receive spiritual guidance are “the highest of essential services,” and pandemic practices over the past year have shown they are not automatically super-spreader events, the Vatican foreign minister said. Speaking Feb. 23 during the high-level segment of the U.N. Human Rights Council session in Geneva, Archbishop Paul R. Gallagher said, “There are numerous examples of how the freedom of worship can be guaranteed while taking all the necessary precautions to protect reasonably public safety.” Pope Francis, the Vatican and most bishops around the world acknowledged and accepted most of the measures imposed by local and national governments to ensure public health and slow the spread of the pandemic, he said. But some measures have gone so far as to “impinge on the free exercise of numerous human rights. Any limitations on the exercise of human rights for the protection of public health must stem from a situation of strict necessity,” he said. “Such limitations must be proportional to the situation, applied in a nondiscriminatory fashion and used only when no other means are available.”

For Lent, read the Gospel, fast from gossip, pope says at Angelus

VATICAN CITY (CNS) — People should fast from gossiping and spreading hearsay as part of their Lenten journey, Pope Francis said. “For Lent this year, I will not speak ill of others, I will not gossip and all of us can do this, everyone. This is a wonderful kind of fasting,” the pope said Feb. 28 after praying the Sunday Angelus. Greeting visitors in St. Peter’s Square, the pope said his advice for Lent included adding a different kind of fasting “that won’t make you feel hungry: fasting from spreading rumors and gossiping. And don’t forget that it will also be helpful to read a verse from the Gospel every day,” he said, urging people to have on hand a pocket-size edition to read whenever possible, even if it is just a random verse. “This will open your heart to the Lord,” he added. 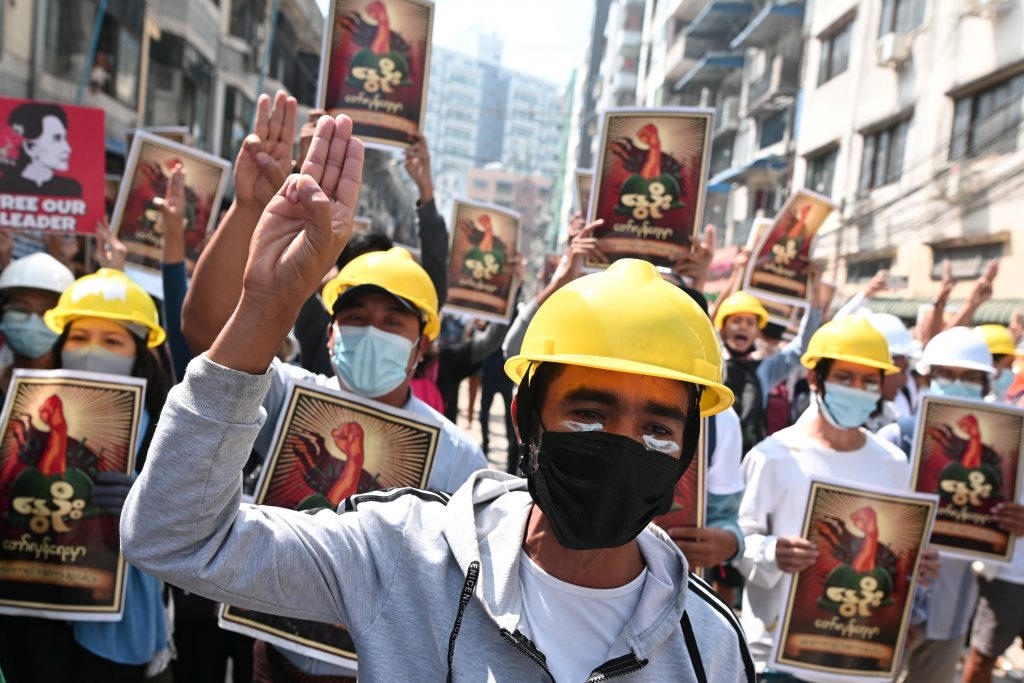 Demonstrators flash the three-finger salute March 1, 2021, during a protest against the military coup in Yangon, Myanmar. (CNS photo/Reuters)